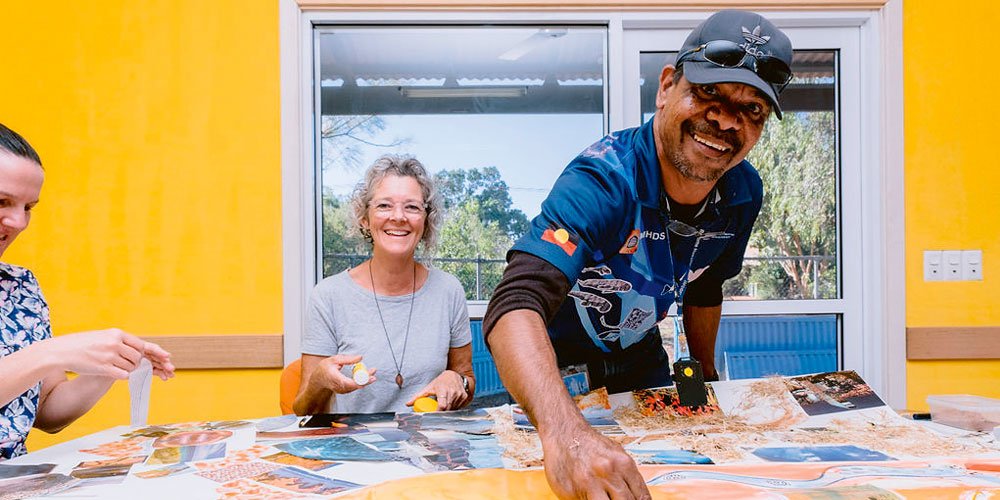 On June 6, Nambour art therapist Nicola Turschwell packed up her four-wheel drive with crayons, coloured papers, clay, large sheets of paper and camping gear and set off on a five-day drive to remote communities in Western Australia to teach art therapy for five weeks. It was the adventure of a lifetime, and one she hopes to repeat every year.

It wasn’t the first time she had ventured into the outback. In 2017 she went through a tough separation after 30 years of marriage. She left her Sunshine Coast home of 28 years, her husband and her job, accepting a new job in the Kimberley without hesitation. The two years she spent there planted deep seeds of love and appreciation for the Indigenous communities she recently went back to visit.

A Gestalt therapist who focuses on sensorimotor art therapy, she spent time with health workers in Kununurra in the Kimberley and Broome, teaching them the profound healing effects of art therapy, which they could then take to people in the Indigenous communities they serve, many who suffer from inter-generational trauma.

“Sensorimotor art therapy taps into the wisdom of the body as you create with visual and sensory art tools,” Ms Turschwell says. “It initiates a process of self-awareness, transformation and healing. Face-to-face training events are few and far between up there and this is a hands-on experience.

“The health workers go through calming methods and then take these simple, accessible therapy tools out to the remote communities they serve. I work in close consultation with the local community and co-present with a local Indigenous worker, so it is done with the deepest respect for the local elders and aligned with culture and country.

“Glen Dixon is a traditional owner of the country around Broome and he had the best stories. We made a group mandala where we worked on one big piece of paper like a community. He was really clear that it had to be about country, so we were very much guided by his direction and other First Nations people in the group. Using the red dirt and gluing on the dried grasses, he made an incredible image of a crab out of the clay we were working with. He was talking about hunting. We just had beautiful conversations.”

Ms Turschwell says there’s a mistaken belief that art therapy requires the participants to be good at art, but in fact it’s more of a healing process than trying to be the next van Gogh.

“Talking to some Indigenous people out there, they said ‘we wish you changed the name to creative healing’. Some of the workers didn’t want to attend because they thought they weren’t good at art. That’s the big fallacy. It’s not about art, it’s about the true expression of yourself.

“My workshops are primarily trauma informed, so it’s about working with traumatised people. It’s a really gentle way to work with trauma – not going into the trauma stories but giving options to calm and soothe through art.”

In 2019, Ms Turschwell was accepted into The Refinery, an eight-week incubator to turn a creative idea into a sustainable business, and is now running her ‘creative mindfulness’ business with art therapy, workshops and clinical supervision on the Sunshine Coast. She calls herself a ‘disruptive creative’. Having recently become a grandmother, she’s aiming to balance her work here with regular trips to remote communities.

“I’m 58 years old and I’m really standing in who I am. I want the best of both worlds. I would like these trips to be yearly, if not more regular. This was a test case to see how I went with the drive. Overall, it’s five days coast to coast without stopping and I made a bit of a holiday out of it.

“This trip was a yearning to go back to that country. I loved it – the pace, the country, the people, the big open spaces, the skies from horizon to horizon, storms in wet season, stars at night. It’s so beautiful – red rocks and red earth. It’s healing country in every sense of the word for me.”

Mary-Lou’s story of love and loss
Breakfast at Aura