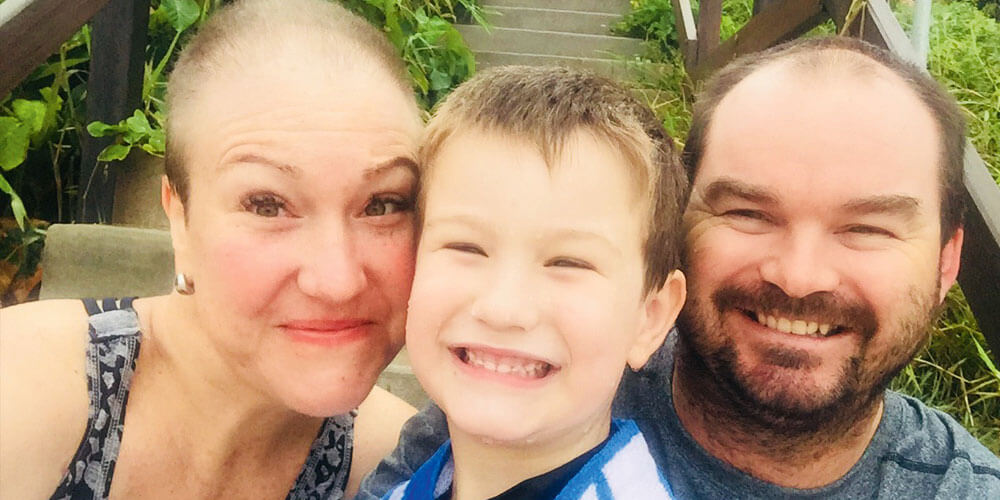 When Trudi Hill began losing her hair from chemotherapy, she made the decision not to cover up her bald head with a wig, scarf or hat so she would be a walking reminder for other women to go home and check their breasts.

The 41-year-old registered nurse was diagnosed with triple-positive breast cancer just four weeks after she arrived on the Sunshine Coast in June last year.

Ms Hill discovered a lump in her left breast during her sea change move from Victoria with husband Luke Wighton and their son Jackson, and it wasn’t until a few weeks later, when they had settled in, that she went to see a GP.

“The doctor sent me off for an ultrasound and a mammogram, which is standard practice, but I had this terrible feeling,” she says. “I knew something was wrong. I wasn’t feeling unwell at all; I was the wellest-looking cancer patient you could think of.

“The mammogram for the right side came up fine,  but when they did the left side, I saw it all over the technician’s face that something was wrong. When they called the radiologist in after the ultrasound, my whole world changed.”

After an “horrific” long weekend awaiting the results,  Ms Hill underwent a double mastectomy, followed by six months of chemotherapy and radiation treatments daily  for 25 weeks. She will undergo immunotherapy with Herceptin until November.

Mr Wighton is a FIFO worker, so Ms Hill relied on  friends to help her through her treatment and recovery in  his absence. She discovered Bloomhill Cancer Care just after her surgery.

“I found I wasn’t coping and I needed some [extra] support. I was going to Bloomhill twice a week for yoga  and sometimes pilates and seeing the therapist there was instrumental in my psychological recovery. They have also helped Jackson to cope with it and the latest report is that  he is managing very well,” she says.

“It is so much easier to talk to people who understand what you are going through and Bloomhill is the perfect place to meet and connect with these people and it’s not  all full of doom and gloom.”

Just last week, Ms Hill returned to work part time at Ochre Medical Centre at Sippy Downs and is looking forward to celebrating the ongoing connection she shares with the Bloomhill staff and fellow cancer patients at the Giggle Ball this weekend.

“We’re very lucky to have the cancer services we do have here on the Sunshine Coast,” she says. “I’m a pretty tough critic being a nurse and I can’t fault any of them.

“I am extremely grateful to everyone who has helped  me on this journey and the biggest mention of all goes to Bloomhill.

“I can’t wait to have a champagne, socialising and celebrating what Bloomhill have achieved and hopefully what they will continue to do into the future.”

Aussie comedians and celebrity contestants from I’m a Celebrity … Get Me Out Of Here! Fiona O’Loughlin and Peter Rowsthorn are set to get the laughter rising and the funds pouring in for Bloomhill, which doesn’t receive any government funding.

Well-known entertainment figure Ian ‘Dicko’ Dickson will also make an appearance – he will act as MC for the event.

Tickets are still available to the Giggle Ball, which is on April 21 from 6pm at the Novotel Twin Waters. Tickets are $220 and include pre-dinner canapes, a three-course dinner and drinks. Visit bloomhill.com.au/online-shop.