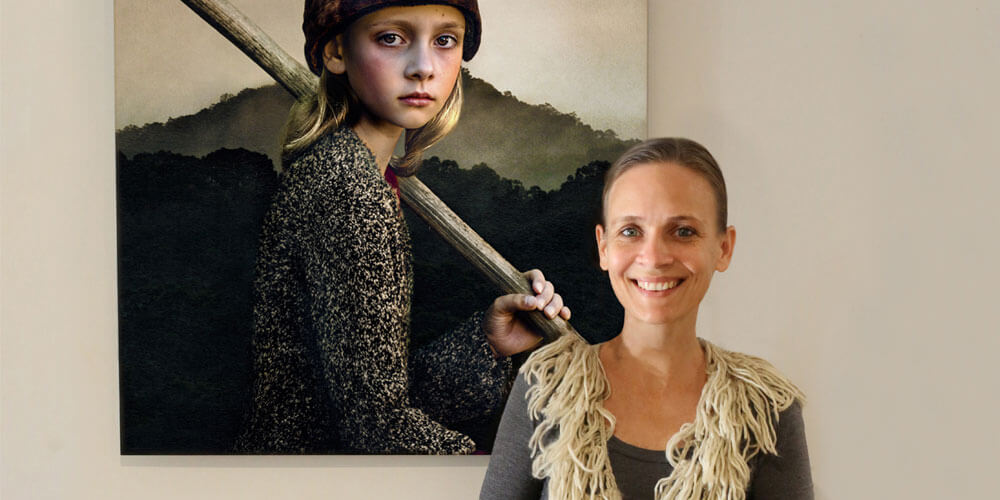 Above: Dasha Riley with her work Autumn Walk

A young girl in a midnight-blue gown rides an emu through a desolate landscape, a nautilus shell in her hand, no shoes on her feet. It’s a surreal image, not quite a photograph and not quite a painting, but an intriguing blend of both.

The piece is called Nautilus and it has been shortlisted for the 65th Blake Art Prize, which offers $35,000 in prize money and is one of Australia’s most prestigious art awards.

Photographic artist Dasha Riley from Woombye is thrilled. With her beaming smile and joyful spirit, her persona is a stark contrast to her haunting, almost gothic work, where waif-like children float through moody settings in photographs she manipulates to give them the effect of a Renaissance or Golden Age painting.

“In my earlier works, I hardly used any Photoshop and created the ‘painterly’ effect mostly by using a single light source and soft lighting, which allowed my subject to disappear into the darkness, an effect found in many old masters paintings,” she says. “I found the best way to create ‘painterly’ fine art portraits was to look at paintings that inspire me and copy the mood, lighting and colours of those images.

“Later on, I started using a method called compositing in Photoshop, which combines several images into a single image. To use this technique successfully and create a convincing illusion, drawing and painting skills are essential to prevent mistakes in the digital manipulation of an image. I have mostly used this method when using animals in my images, as in Nautilus, which features my daughter Julia riding on an emu I photographed at Australia Zoo.

“Another technique that reinforces the painterliness of an image is applying a texture, meaning a high-resolution photograph of any texture such as paper, marble, etc on top of the image using Photoshop blending modes. I love using paper textures over my backgrounds, as it simplifies them and gives the illusion of a painting, a technique I also used in Nautilus.”

Represented by Lethbridge Gallery in Brisbane, Mrs Riley is the artist in focus at this year’s Immanuel Arts Festival and credits the festival with giving her confidence as a self-taught artist.

“My images reflect internal worlds rooted in the magic of childhood and personal dreams and visions, with narratives touching on themes of European heritage, solitude, the otherworldly, and awareness of our connection to the divine,” she says.

“I sold my first artwork at Immanuel, which was my artwork Lore. Apart from the confidence it gave me, it also taught me that commercial galleries aren’t the only avenue for artists to sell their work.

“Immanuel is a wonderful opportunity for both artists and art lovers to appreciate and purchase art. There are so many talented people who create art and might not be confident enough to approach a gallery or might not fit into a category considered fashionable by the art world at the moment, however, their art is extremely likeable and popular.

“At the same time, there are many people who would never step into an art gallery but fall in love with art they understand and are able to appreciate and afford. Immanuel’s sales record clearly shows that art by the people for the people is a successful concept that is worth supporting.”

Melissa Evans has been the convener of the festival since 2014 and volunteers 10 hours a week for six months leading up to the event, and 10 hours a day as it draws closer. She says hundreds of volunteers help make the event a success, and she loves the opportunity it gives both emerging and experienced artists, as well as students, to exhibit in the same space.

“We don’t put any distinction on whether they are a first-time artist or not,” she says. “The way we display the work is with similar-themed pieces together, like abstracts or landscapes. Because there are so many artists, it is a good space to hang their work if they’ve not been displayed before.

“A lot of people aren’t necessarily going to have their own show. At a gallery you have to have a number of pieces at a certain level. Here, you can hang a piece, put it up for sale, show it off and not feel so self-conscious, because there are hundreds of pieces there. It’s not as scary as going into a gallery and having to put together a display.”

Coolum artist Chris Postle exhibits at Montville Art Gallery, Moulton Gallery in Sydney and the Gallery Beneath in Mooloolaba, and has a home studio that is open to the public. He has been exhibiting at the Immanuel Arts Festival for eight years.

“My work is evolving all the time,” he says. “When I started entering Immanuel I was breaking into Impressionist styles, mostly theme-based from our beautiful diversity of natural flora and fauna surrounding us. When I was artist in focus a few years back, I showcased a cross section of waves and Impressionist flora, banksia and melaleuca trees.

“It’s a great chance to interact with your viewers, network amongst other artists and hopefully win a prize or sell a painting or two.

“We are quite lucky these days to have internet as a marketing tool, but with art, most people tend to be a bit more impulsive with their spending if they can see the product in the flesh.”

Mr Postle says he’s experienced plenty of highs and lows in his 27-year career and is finally starting to take some positive leaps.

“I was chosen by a design company to help fit out super yachts and have so far worked on supplying paintings for two 80-metre boats.

“I always enter competitions and have exhibitions, recently being invited to London to participate in the Parallax Art Fair which was held in old Chelsea Town Hall, which was an amazing experience.

“I was very fortunate in the Immanuel show on a couple of occasions to win best local artist, and I was also a people’s choice winner one year. I do work very hard at my profession and nothing comes easy. You just make sure you have some fun along the way.

“Any publicity or opportunities to place your work in front of an audience always helps your journey,” he adds. “A lot of the industry is about marketing, having a product that people are interested in and putting it out there. Immanuel Arts Festival has a large audience and being a local also makes it very beneficial to be part of.”

Kym Barrett is an award-winning artist from Chatsworth,10 kilometres north of Gympie. She exhibits with Tusk Gallery in Melbourne and Fish Lane Studios in Brisbane and credits the Immanuel Arts Festival with giving her exposure to the Sunshine Coast and helping build her career. She exhibited at Immanuel Arts Festival from 2006 to 2015 and won best painting in 2006 and 2010.

“I use drawing materials with mixed media, to create abstract paintings that aim to evoke aspects of the natural world imbued with a sense of depth and mystery … that there’s more there than a surface consolation,” she says. “My approach is organic and physical, ideally allowing each piece to evolve unpredictably, using a balance of intuition and intention. In our busy world, I am convinced that we need to reconnect with the ‘great rhythms and flows of nature’, as John Wolseley says, and find the still, quiet place within.

Ms Barrett was the artist in focus at the Immanuel Arts Festival in 2011.

“The community has the opportunity at Immanuel Arts to view, appreciate and purchase high-quality work at reasonable prices, often by artists early in their career.”

The Immanuel Arts Festival Gala Opening is on May 24 at 7pm. The exhibition runs from May 25 to 27 and is proudly supported by My Weekly Preview.

Boy wonder and his comic crusade
Lion: Sue Brierley reflects on life as a mother