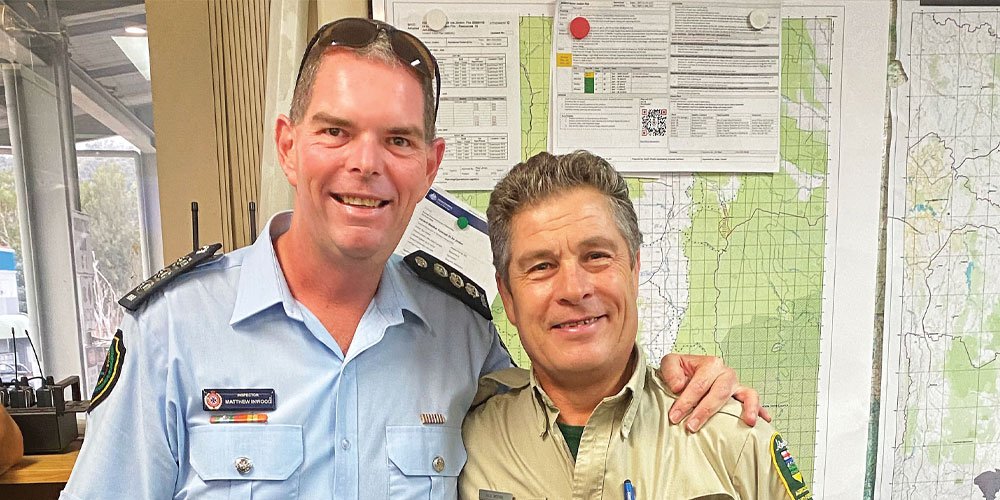 Inspector Matthew Inwood has recently returned home to Caloundra after being deployed to help fight the New South Wales bushfires. The newly appointed Sunshine Coast area director for Queensland Fire and Emergency Services took 18 Sunshine Coast volunteer firefighters to the Lake George area and was part of an incident management team. Now back on the Coast, he reflects on a busy few months after starting his new role in November, just as the Noosa fires were raging.

“It’s a little challenging to start a new position on the run, but equally good to get to know people quickly,” he says. “For me, it was wonderful to see how many wonderful volunteers we have on the Sunshine Coast, as well as career firefighters. It was wonderful to see people, under those operational circumstances, really showing their capacity and capabilities.

“From my perspective, it’s nice to see that level of commitment there up front. It gives you a quick look from an operational perspective of things you may or may not need to build on. It was wonderful for me to see how committed people on the Sunshine Coast are.”

Thankfully, rain had started to fall when his crew arrived at Lake George and the fires were beginning to be contained.

“We’ve had crews circling the fires – Queensland crews, Tasmanian crews and New Zealand crews. We had about 130 out-of-area personnel as well as crews from the New South Wales fire service. Their main task was patrolling the fire grounds. Most of the fires were at the stage of being contained due to more favourable weather conditions.

“The predominant focus was what we call mopping up and blacking out. Making sure the area is secure and no fire is likely to escape those firegrounds and threaten the community. While it’s often seen as a menial task, it’s often one of the more critical tasks. The other critical thing is giving the local people a rest. These people have been flat out for two to three weeks, with intense fire conditions.

“We all use the same incident management system, so we are able to integrate seamlessly no matter what part of the world we’re in. I did a tour to Canada in 2015 and fitted in. It’s really good to see the multinational countries come together and get out there to do the job as best they can with the common goal of restoring normality back to those communities. Whether nationally or internationally, we use the same tactics and protocols to achieve the common outcome of protecting the community.”

Mr Inwood began his firefighting career 29 years ago while still a teenager, attracted by the idea of selfless service.

“I was following my heart and moving into a career doing something I enjoyed,” he says. “I’d been in private enterprise prior to that. I enjoyed being able to do something for the community and having a rewarding career providing help and assistance to people in their time of need.

“It’s a very meaningful job. I feel quite lucky to be able to have such a great bunch of firefighters who give up their time selflessly. That in itself is a really wonderful thing.”

Mr Inwood says the support coming from the community in terms of donations for the rural fire services has been “absolutely fantastic”.

“There’s a level of government funding provided but the donations will assist the brigades to get some extra equipment. There are always things in any industry and any organisation that are nice to have, but sometimes you need additional funding to get those things that enable them to do their job that more easily.”

“If we continue to see a bit of moisture like we’re seeing, things are looking better but we can’t afford to be complacent. The ground moisture content is still quite low and it wouldn’t take much, a couple of hot days and things can turn very quickly.

“We’re in record drought conditions and people need to remain cognisant of that. It’s about the community being prepared. I have spent my career trying to get that across to the community and making sure they’re heeding the warnings. It helps us, the firefighters, if we’re having good access into the property, having gutters cleared, protection zones around your assets, making sure lawns are mowed. In rural areas it’s things like having backup pumps, fittings on water tanks and the like. All those things can assist us to get in and do our job.

“It has certainly been among the worst fire seasons. We have record high temperatures and combined with the record drought, it all add up to make a fire season more volatile.”

Continue Reading
You may also like...
Related Topics: bushfires

Turia Pitt responds to the bushfire crisis
Out and about: Local Artists Art Prize event
To Top