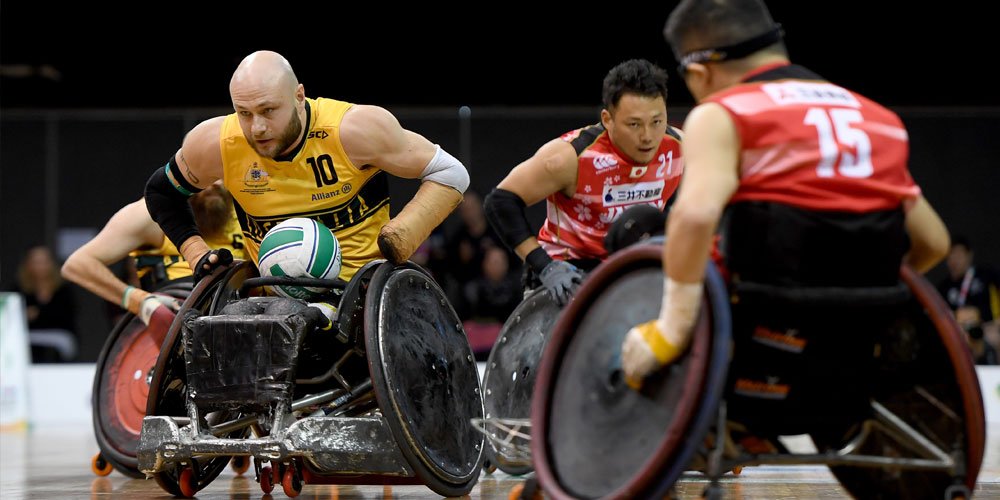 Inspirational Sunshine Coast athlete Chris Bond says there were a lot of ‘why me?’ moments after he suddenly became seriously ill and lost his legs.

However, a passion for sport and committed support helped him become one of Australia’s most amazing representatives.

The 35-year-old, from Baringa in Aura, is set to compete in Tokyo at his third Paralympics as a leading wheelchair
rugby player.

He is in Japan and the Steelers began their campaign on day one of the Games yesterday, Wednesday, August 25.

Mr Bond had barely heard of wheelchair rugby when he was a teenager. He was a gifted athlete, who had a particular passion for rugby league.

But his life was turned upside down as a 19-year-old. “Out of the blue I felt sick in my stomach, and I was rushed to hospital and the next thing you know I’m in the ICU coming out of an induced coma,” he says.

Mr Bond had a rare form of leukaemia and he developed a severe infection which started to take over his body.

Both of his legs were subsequently amputated, along with his left hand, and four fingers on his right hand.

“It was extremely tough,” he says.“I had sort of thought I was invincible and then I was suddenly completely dependent on others.

“I was sitting there, unable to feed myself or go to the toilet by myself.”

It was hard for him to comprehend what had happened and there was, understandably, some self-pity.

“It [the illness and operations] was all so out of the blue and I had done nothing wrong, so there were a lot of ‘why me?’ moments, particularly at the beginning.”

But he bounced back.

“Luckily, I had good family support around me to help me get through those dark days and I reached little goals, through my hospital journey, through my chemotherapy and with rehabilitation.”

“I started gaining some independence, strength and a little bit of my identity.

“I was a young, fit 19-year-old and then suddenly I was a skinny 40-kilogram guy in a wheelchair, and I didn’t want
to identify with that, so I started to get stronger, and I felt a bit more like myself.

“Instead of dwelling on what’s wrong, I had to try and just get my head space right and think ‘all right, what’s next?’”

He pursued a valuable outlet.

“There was something missing in my life and that was sport and I wanted to get back into it,” Mr Bond says.

“But I had no idea about disability sports.

“The guys at the rehab said: ‘if you want to get into sport, swimming’s probably the only thing you’d be able
to do with your disability’.

“I thought I’d give it a go and I did for about a year, but I really didn’t enjoy it. I had been more of a runner and a team sport kind of guy.”

A chance meeting with the Australian wheelchair rugby coach, Brad Dubberley, at a gym in Canberra where he lived at
the time provided Mr Bond with a great opportunity.

“He came over and said g’day and asked if I wanted to try the sport and I was like 100 per cent.

“The Aussie team had a camp in Canberra that year, so I rocked up as a guest and watched. I was in awe of what the guys were doing and then I jumped in and gave it a go.”

He immediately took a liking to it, and decided that was what he wanted to do.

“I dedicated all my time to it,” Mr Bond says.

“I did everything I could during the next 12 months to be able to play for my state and then luckily for my country
soon after.”

He’ll play his 200th game for the team at Tokyo.

“Ever since I got in he rugby chair, I haven’t looked back and have done everything I can to represent my country and I’ve grown my game to now have a leadership role.”

His passion for rugby league as a teenager has transferred to wheelchair rugby as an adult.

“I love the fast and full-contact nature of it,” he says.

“That’s what drags you in and you have the team camaraderie as well. And spectators love it too because it’s full contact.”

The Steelers have claimed victory at the past two Paralympics.

“But Japan beat us at the world championships in 2018, which was our last major event,” Mr Bond says. “So, it’s time to take it [top status] off them on their home soil and show them we’re the best in the world.”

Mr Bond plays a major role in the Australian team, essentially running the plays, along with Ryley Batt.

There are several players in the national squad, who have various disabilities and abilities after being involved in accidents or illness.

“There are a lot of tactics and wheelchair rugby is a mix of three of four different sports [like basketball, rugby
and gridiron], but it really comes well together,” Mr Bond says.

He adds that his rise as an elite athlete is a special journey his family can follow.

“When I go and represent my country, I’m doing it for Australia, but also my family, who have seen me in my dire straits,” he says.

“To be successful at the highest level and add value to the team is pretty cool to share with your family, who have been through the trenches with you.”

And Mr Bond is scoring goals in all aspects of his life.

He now lives at Baringa with his fiancee, two-time Paralympic wheelchair basketballer Bridie Kean, and their daughter Victoria.

He works full time as a fundraising manager for the Australian Sports Foundation and is on the board for Disability Sports Australia.

The Paralympics is being broadcast live on the Seven Network.

Schedule for Chris and the Steelers

Continue Reading
You may also like...
Related Topics: Paralympics

USC Spartans taking Olympics by storm
A story from the heart