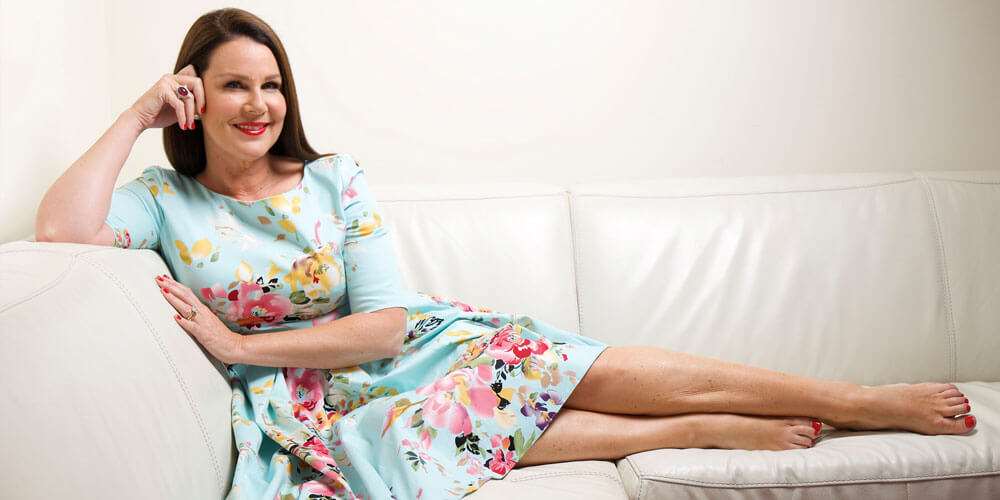 You would think one of the country’s most renowned comedians would go all-out for her 50th birthday, making it a star-studded affair with all the trimmings.

But the fact Julia Morris chose to spend the day with her “lovely husband” Dan Thomas and their daughters Ruby and Sophie, making a birthday cake in something of a Nailed It! challenge inspired by the Netflix show of the same name, just goes to show how down-to-earth she is.

Whether they nailed the big round blue cake – which featured a large marzipan unicorn that “was drunk on sugar” after taking a huge bite out of the side of the cake – is up for discussion.

“The girls were confident, but they are nine and 11, so they are much closer to the bench,” Ms Morris quips.

Speaking to My Weekly Preview in the lead-up to her acclaimed Lift and Separate Golden Jubilee Tour arriving on the Sunshine Coast, Ms Morris (who is also known as the Lady of the Manor of Gosforth – she has the paperwork to prove it) says she “could not be more delighted” to celebrate the milestone.

“I have had to do a bit of work on my mental health over the last 10 years and I am in a wonderful place now. Why arrive [at 50]carrying baggage? Arrive with happy arms,” she says.

From the outside, Ms Morris appears to have it all. Her successful career has spanned more than three decades and has seen her share the stage with comedy royalty including Richard Pryor, Jason Alexander, Whoopi Goldberg, Jerry Lewis, Dame Edna and the late Robin Williams.

She is a two-time Silver Logie nominee for her role on the five seasons of Nine Network’s House Husbands, is the co-host of Network Ten’s I’m A Celebrity… Get Me Out of Here! and has won Helpmann Awards for her comedy stage shows, all while raising a family.

But Ms Morris says the glamorous lifestyle we think she lives is “smoke and mirrors”.

“People say I’m living the dream, but I’m living a 24/7, 365 put-your-foot-on-the-throttle extravaganza. Because the second you slow down, it’s absolutely concurrent with a slide in success in the entertainment industry for sure,” she says.

“If you are Penélope Cruz and you get millions for your work, you can do without the wages coming in for a while. But ours is like any ordinary household and I need to keep working.

“I get the incredible luxury of being able to focus on my work because I’ve left one of my jobs at home with Dan. He has the job of mummy while I’m away and he is a very unusual man in that he is absolutely not only fantastic with the kids, but he is also fantastic in our home, so when I come home there is no big handover and a list of all the things I need to do.”

Maintaining friendships has been one of Ms Morris’ biggest challenges, with very little time left to connect with her gal pals on a regular basis.

“Everyone says something’s got to give and my friends are very kind with me and are very active in keeping our friendships alive. I, on the other hand, sometimes feel shameful in my contact, but I make sure that whenever I do get the time, I get together with my girls,” she says.

Ms Morris says this year’s season of I’m A Celebrity…, which she has co-hosted with Dr Chris Brown since 2015, was the most explosive by far and she was super proud to see fellow comedian Fiona O’Loughlin take home the crown of Queen of the Jungle.

“I was absolutely thrilled because it’s really hard for anyone to beat a sportsman in this country, let alone a couple of them. In a sheer numbers game, oftentimes the males are more popular than the girls, so her win was a triumph on so many levels.”

The long hours filming in the jungle suck out any desire to be “let off the leash and go out for a night” once each day wraps up.

“It’s so intense. It’s 14-hour days, six days a week, so I tend to steer clear of all grown-up details outside of filming, but I definitely get emotionally involved with what’s happening with the contestants because you are essentially in a bubble away from home,” she says.

Her next project is a re-hash of popular British dating show Blind Date. Ms Morris will host the Network Ten show, which will begin filming in July.

“It’s super exciting and it’s going to be hilarious. I’m a big fan of Cilla Black’s version of the show, which I watched religiously when I lived in the UK for eight years,” she says.

“I’m definitely going to be winding [the contestants] up. I will say that we are taking the leap of having all sorts of age groups and different types of couples and I am super proud of being part of a wild, new frontier.”

In the meantime, she will be delighting in some “lazy mummy touring” with a host of Thursday, Friday and Saturday night shows spread out over a few months throughout regional Australia.

Her Lift and Separate show sold out in capital cities around the country last year and Ms Morris says she has chosen her “all-time favourite” places to tour to this time around.

“The Sunshine Coast is part of a particularly delicious leg of the tour because I have a number of faves in a row,” she says.

“I’m not setting out to teach anybody how to live their lives, the show has many, many laughs and I’ve had a few complaints from women who’ve said that level of laughs hasn’t helped them when sitting in those plush seats.”