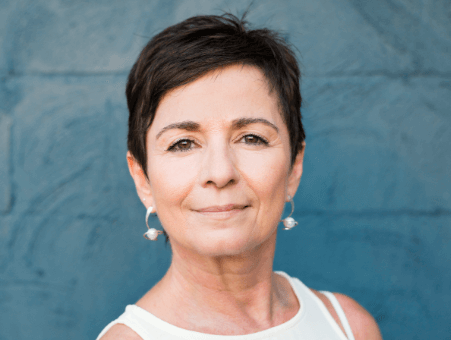 During 25 years living in Los Angeles, award-winning TV producer Livia Hanich worked with the likes of Aaron Spelling, Darren Star and Steven Spielberg, and now she’s bringing her knowledge and experience to a grassroots level through the Sunshine Coast Screen Collective.

Born and raised in Sydney, Hanich began her career in the mid-1980s working on the science show Beyond 2000 before moving to LA, where she landed a job producing the US version of the show, Beyond Tomorrow.

“I was 27 and I wanted to explore a bigger pond,” Hanich says.

She certainly got what she wanted.

Her career from there included an internship with Henry Winkler’s company Fair Dinkum Productions, which led to a job as a post producer on global hit shows Beverly Hills 90210 and Melrose Place.

“I thought, oh my God, I’m coming off a factual reality show that changes people’s lives and I’m going to work on a teenage drama series, but I had no clue Beverly Hills would be such a huge and successful show.

“I really enjoyed it; it was fresh material. From there I was asked to go onto Melrose Place and I stayed there for the next six years.”

As a post producer, Hanich is responsible for overseeing and managing the schedule and budget and working on the entire production from the editorial side through to finishing the project, colour correction, sound mixing, sound design, working with the actors for the dialogue replacement, the music, interacting with composers, and then delivering the finished product.

“It’s fabulous, when I fell into post production I really found my calling,” she says.

“I love it so much. It really speaks to a variety of different aspects of me – the creative, logistical part of me, schedules, budgets and at the same time having a hand in the creative aspects.”

After the fun of teen drama, Hanich enjoyed sinking her teeth back into factual programming with a marine biology show for Village Roadshow, followed by a series of documentaries and then the logistically challenging Temptation Island, a reality show where she was based in Honduras co-ordinating TV crews from five countries.

She then jumped back into dramatic long-form TV with a Barry Sonnenfeld (The Addams Family, Men in Black) comedy Notes from the Underbelly, followed by the critically acclaimed Pushing Daisies and sci-fi drama Terra Nova, produced by Steven Spielberg’s DreamWorks TV.

She also worked on the new version of the iconic science show Cosmos. For this she won a Producers Guild of America Award, a Peabody Award and was nominated for an Emmy.

From there she worked on the TV remake of 12 Monkeys, and it was during this time that she and husband Bill Missett, a screen editor, decided they didn’t want to raise their teenage sons, Jake and Gage, in LA.

When Hanich’s brother moved to Noosa from Sydney, it triggered a desire for a more relaxed, slower pace and they left the red carpets and glitzy Hollywood parties for sleepy Doonan, moving there in 2015.

With her remarkable career pedigree, Hanich quickly found work with Brisbane company Hoodlum Entertainment and is post-producing an ABC drama, Harrow, to be launched in February.

“It begins shooting in March next year and it would be a massive coup to be able to bring that up here,” she says.

“Obviously there are logistical challenges, but it would be a massive boon for the region.”

“Bill and I landed here and were drawn into conversations about developing more of a screen industry in the region,” Hanich says.

“In July this year we formed as a not-for-profit and named it the Sunshine Coast Screen Collective with the mission statement to nurture and develop and be an advocate for the local screen industry.

“It can cross so many different platforms; everything from online content, gaming content, through to traditional forms of webisodes, television and hopefully in time – because it has incredible locations – to see it as another region outside the Gold Coat for film entertainment.

“There’s a lot of creative talent here with unique voices and we want to identify resources to help tell those stories.

“They all come together in being a part of realising an end product.

“Bill has been in the industry as long as I have and is an experienced editor.

“We are feeling so excited because we’re finding ourselves in our group, forming this screen collective and what we can bring to the region.

“It has so much potential. It’s exciting to see the Sunshine Coast Council has a real drive to support and nurture innovation and creativity.

“I come very humble and excited about what experience Bill and I can bring to the table, how we can help inspire and motivate young voices and new voices.

“I’ve always enjoyed being part of seeing people realise their potential and dreams.”