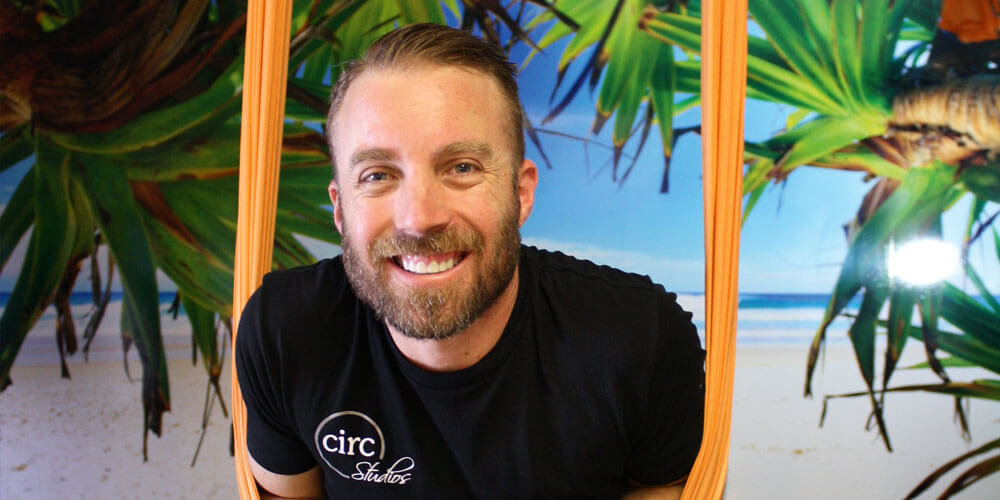 Darren Smith at his studio in Warana

Bundaberg was a tough place to grow up for a boy ballet dancer. Darren Smith began dancing at his mother’s dance studio at the age of five and kept at it despite being bullied, going on to become a professional dancer and acrobat working in major international musicals and finally, scoring his dream job with Cirque du Soleil.

The Mooloolaba father of two, who owns Warana’s Just Acrobatics and CircStudios, along with Coastal Cruises Mooloolaba, has come a long way since those days.

“Bundy was all fishos and farmers, so it was a tough crowd,” he says. “But I always stuck with it. I was really little when I was growing up and because I was so little, I was easy to pick on.

“The ballet component was the problem up there – as soon as you’re in ballet, you’d be instantly labelled.

“There was a bit of heckling, but it never really worried me. I had a strong, supportive family. On the weekends I’d go sailing with the old man and dance with my mum Dianne during the week.

“I did tap, dance, ballet and sports acrobatics. Dianne was known for her acrobatics training and trained teams to go overseas.”

In 1992, Mr Smith was six months into a Bachelor of Dance at Queensland University of Technology when he auditioned for Cats and was offered a contract immediately.

“Cats was like the pinnacle of the dance world at the time, so it was a big opportunity,” he says.

He never returned to university, landing job after job from that point on, beginning with the original Australian tour of Cats, followed by Singapore, Hong Kong and Seoul.

After three years in the Australian production, he went on to perform in the German and Belgian productions. From there he was offered a job in Miss Saigon in Holland, where he lived for two years before returning to Australia in 1998.

“I was ready to settle down and not be on tour all the time,” he says.

“But the Australian market was very limited and it was hard to get work for a couple of years. I worked in hospitality and it was a bit of a wake-up call.”

While in Holland, he’d auditioned for Cirque du Soleil and didn’t make it past the first audition, however a fascination for the groundbreaking new circus had been awakened.

“I remember when I went to see Cirque I thought it’s one of those shows where you’re going to see circus animals. It was Saltimbanco and I remember walking out and thinking, wow, this is insane. It was a whole new breed of circus.”

When he auditioned again a couple of years later and again failed to make it in, he was disheartened and decided to leave Sydney and create a new life for himself on the Sunshine Coast.

“I’d been working in bars and making coffee and doing whatever was available,” he says. “I had a dream I could start a business in the boating world.”

He started Cruiz Away River Tours, taking trips around the Mooloolah River National Park from The Wharf at Moolooaba and had settled into a new life when out of the blue, he got a call from Cirque du Soleil.

“They said we’ve had you on the books and we want you for a new show in Vegas,” he says.

“My brain had already switched off and I was just starting to get into the Sunshine Coast lifestyle. My first thought was, I can’t go because I’ve got a business, but my brother and mum were really supportive and said they could run the business without me.”

He found himself on a plane to Montreal to rehearse for Kà, Cirque du Soleil’s show at the MGM Grand Casino in Las Vegas, which he performed in from 2003 to 2009.

“It was one of the most extravagant productions, they spent $180 million,” he says.

“They had flying stages, it was crazy.

“The scale of the Cirque du Soleil headquarters in Montreal was mindblowing.

“If you can imagine the Caloundra Indoor Stadium – five of those lined up side by side full of circus stuff happening. It was pretty exciting to work there.

“I never saw myself as doing a death defying job on a daily basis, but I’d be hanging 110 or 120 feet in the air above cement.

“That was six days a week but sometimes you’d be in all week.”

After his long run in the show and at the age of 33, he felt his body wasn’t coping as well with the demands of the job and decided to return home with his wife, but rather than having a big nest egg behind them, they found themselves back on the Sunshine Coast, starting from scratch.

“We lost our house in the GFC,” he says. “We bought a house in 2005 and spent heaps of money on it and were going to make a profit and move back to Australia, but they foreclosed on the house.

But with the drive and determination that took him to great heights in his profession, Mr Smith has built a happy life here on the Coast with his wife and two young children, who both attend his acrobatics school.

Were you spotted at the Deadly 60 show?
Chores performance