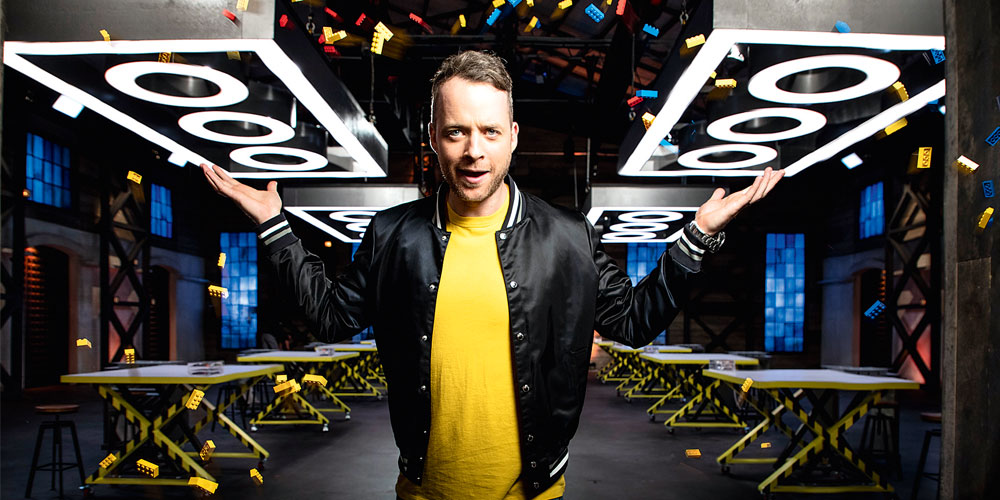 In the eyes of little Sonny Blake, it’s normal for any dad to be dressed up in a chicken suit at the radio station one day and featuring as a voice actor on an internationally-acclaimed Disney movie the next.

So even though his famous father Hamish Blake was beyond excited to tell him about his latest role, as the host of Channel Nine’s new show Lego Masters, the four-year-old wasn’t too impressed by the idea.

“So, he just came in and was like, ‘Yeah, great, it’s what I expected because that’s what you told me you were doing’. To him, it’s just one of the jobs available to parents and nothing I think is awesome will ever be awesome to him, that’s part of being a dad.”

Having built a career as one half of comedic duo Hamish and Andy, Mr Blake knows all too well the pressures that come with high expectations to keep audiences engaged, something he and Andy Lee have been able to nail for almost two decades across radio, television and podcasting.

So he was pleasantly surprised that Lego Masters, which will debut on April 28 and run for three weeks, was one of his most stress-free roles to date.

“It’s a hell of a gig. I can’t be eliminated, there is no time pressure on me and I don’t even have to do any judging, that is all done by Brickman (Ryan McNaught, the sole Lego certified professional in the southern hemisphere). I just get to hang out and have a great time chatting about Lego,” he says.

Mr Blake admits he still has to revert to the instruction booklet to build anything of substance out of Lego. But, there won’t be a single booklet in sight on this show as eight teams of two are put through their paces in a series of colourful challenges designed to put their masterful skills to the test – with design, creativity, ingenuity, engineering and construction techniques, plus storytelling ability, all under scrutiny.

Walking into the show’s brick storage room for the first time is a memory Mr Blake, a former child medieval and space-themed Lego enthusiast, will never forget.

“It stirs something in you that is in a category next to primal, the child in you can’t believe you’re in a room with this much Lego,” he says.

“Every adult has the same reaction. You think, it’s too much, I shouldn’t be here, I shouldn’t have access to this much Lego. It really is an experience for both the teams and the viewers that we can only share once because by the time the second season comes, it will be the expected thing.”

In the meantime, while families and Lego enthusiasts around the country revel in this new show, Mr Blake gets to live out eight-year-old Hamish’s dreams while “looking to pocket as much Lego as possible along the way without raising alarm”.

It is just one in a long string of career highlights. It was fate that brought Mr Blake and Mr Lee together in the year 2000 at the University of Melbourne, where Mr Blake had enrolled in a science/commerce double degree. He admits it wasn’t long before the “wheels fell off” his academic aspirations.

Deciding to pursue comedy, their careers skyrocketed to unparalleled success when they hosted the highest rating radio program in Australian history. Their national drive show reached around 2.5 million listeners each week and their Caravan of Courage tours saw them venture to the Sunshine Coast a couple of times over the years.

Together with radio and TV, they’ve also held comedy reign with their podcasts, having topped the iTunes charts as the number one in Australia.

They now cross over the three platforms regularly and Mr Blake says he feels extremely grateful that fun can now be one of his main criteria for whether or not he pursues an opportunity, while spending as much time as he can with Sonny, 18-month-old Rudy and wife Zoë Foster Blake.

“I have been lucky to be able to do so many different things, including ticking off my desire to impress my wife by acting in a Disney movie… even if it was just four lines… I’m pretty sure my role was critical to the success of the film,” he quips.

“But now I can pick things to do that seem like fun and will take the right amount of time that I have to spend on it in order to make it good and to make it worth doing. I am so extremely grateful to be in a position to be able to do that.”