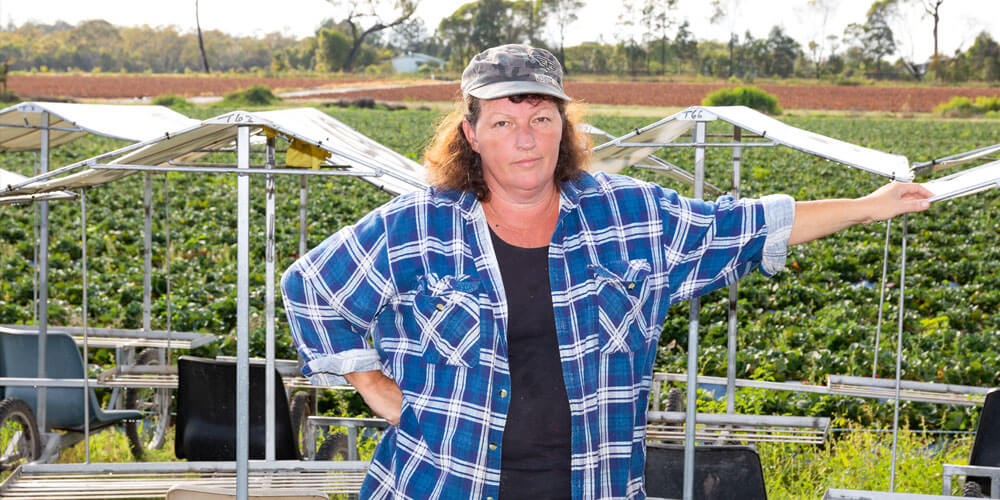 She had a million punnets in the ground that had to be sprayed out after the controversy, but she’s more upset at having to lay off 100 staff, and you can hear it in her voice. “I know every single one of my employees by name and I greet them every day,” she says.

“I like to have a good rapport with my staff and that builds a lot of happiness and respect – happy workers are really productive.

“We look after our staff, so it really hurt me to stop the season like that, because they should be putting a lot of money in their pockets about now.  This has hurt my staff, more than me personally and that upsets me a lot.”

Apart from losing her produce, she will now have to invest in metal detectors and new tamper-proof packaging. But she’s not giving up on strawberries.

“It’s my father’s farm, but he’s 73 now and doesn’t know anything about running a modern farming enterprise,” she says. “He’s a proud Maltese man and he doesn’t want to go on a pension; he doesn’t see that as the sum total of his life.

“I understand that, so here I am. I am his Centrelink. I’m not a young person either. I have come and started to manage this operation and it’s huge – 120 staff. That’s a big business.”

Mrs West’s family has been farming in the Sunshine Coast region since the 1960s, beginning with tobacco and moving into vegetables and small crops.

“We had the best upbringing ever growing up in the Glass House Mountains. We had lots of fun, lots of parties,” she says. “It was all farms back then, little family farms. I grew up with all the Italian and foreign farmers’ kids.

“We’d sit under the mango tree and have a few beers. We had a really great life, no hassles. Life was so easy and uncomplicated, and everything was cheap.”

The family began growing strawberries in the early 2000s and it has been a steep learning curve. “I applied my knowledge of science and organic farming methods to a large-scale commercial production system and the quality and yield is our reward for looking after the environment.

“We start planting mid-March and start picking by late April. It steadily builds to a crescendo by the time we hit July and August. Normally, we would pick a semi-trailer load of fruit every day – about 24 pallets.”

At the start of each season, Mrs West orders runners from Stanthorpe, which arrive in stages.

“I love planting. We have to put the sprinklers on and we have a lot of fun. We have a lot of Asian, Japanese and Korean workers, because we can’t get enough local workers, and I laugh because they have their shoes all lined up at the edge of the muddy field.

“Being a small European family, we work alongside our staff. We don’t sit in the house and give orders.

“We give the strawberries a heap of love and attention and lots of water and within about four weeks, they’ll start flowering. The leaves will die and make new leaves and new roots. We cut the old leaves off, so they don’t present any disease.

“We weed by hand because of our proximity to waterways and the ocean. I refuse to use sprays. It’s expensive, but I don’t like harming my environment. Healthy soil is a living thing – you can’t just nuke it with stuff. You have to love it.

“We start picking four to six weeks after we plant. When we pick, everyone has an individual barcode ID. They carry 10 trays on a trolley to the weighing station, they weigh them in and scan their ID and boom, that’s how they record their weights and that’s how we work out their pay scales.”

Mrs West says her fastest packers earn $70 to $80 an hour, but it takes a couple of seasons to achieve that speed. After being picked and weighed, the strawberries are stacked in a cage and fast-chilled before being shipped out to stores.

“We might start work at 6.30am and the packers might start at 10.30. I try not to work past 2pm in the field if I can avoid it. Some people work their workers from sun up to sundown.”

Mrs West, who earned a Bachelor of Agricultural Economics from the University of Queensland, says she’s a “hopeless” strawberry picker and prefers to work in administration.

“I always wanted to be a graphic artist,” she says. “How far off the track did that go? I also like accounting and business management and was studying for my certificate five in accounting when my Dad wanted me to come back to farming. I had to throw it out the window.”

Mrs West also owns a banana farm with her husband in Wamuran. “As banana farmers, we’re tiny little guys. We ripen our bananas and sell them at farmers markets at Kawana and Noosa. We love it, that’s our life.

“There are hundreds of customers we’ve known for years. They come out to the farm at Bells Creek during strawberry season because they miss me. They come out and give me a hug – they’re like my family.”

While farming is her life, she says it’s increasingly difficult. “The cost of compliance and regulation and everything we have to do is not paid back to us.

“Farming is no longer little family farms where we all got out there picking and packing. It’s now big business and the prices are too low and production costs too high. We do make a profit, but I don’t bother taking any of the money because we have to keep investing in new technologies and better facilities.

“Who wants to work 120 hours a week for no money and spend every school holiday doing your BAS?

“No way in the world would I want my children or grandchildren to do it,” she says. “We’re the last generation of farmers.”