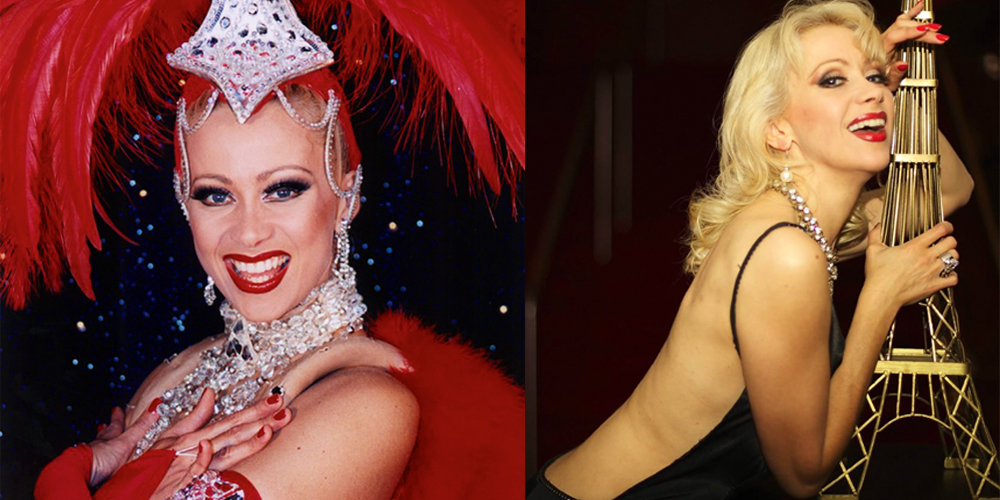 Marissa Burgess left Australia for Paris at the tender age of 17 with dreams of being a showgirl.

Trained in ballet, tap and jazz from the age of five, she’d done a short stint with a dance company in Tasmania before taking herself to Paris, where she became the longest-serving lead dancer at the Moulin Rouge, the world’s most famous cabaret show.

The Gold Coast performer arrived in Paris in 1986 and quickly landed a role at Moulin Rouge, doing 12 shows a week, decked out in feathers and sparkles, for 17 years.

“I was really confident,” she says. “I’d been there before and I knew how it worked.

“My sister is five years my senior and was there working in the Lido show, so she’d done it all before me.

“I was really not phased; I wasn’t one of those gushy teenagers saying, look at me, look where I am now. I was intent on working hard and making the most of what is a difficult lifestyle.”

She cites the language barrier, cultural barriers, the difficulties of living in a big city and the complexities of getting along with dancers from varying backgrounds as some of the challenges she faced, as well as a gruelling performance schedule.

But life as a dancer at the Moulin Rouge also had its perks, including meeting hundreds of celebrities, including Johnny Depp, Ella Fitzgerald, Ray Charles, Quincy Jones and Cate Blanchett.

“You work late nights and you can’t step off stage and go to bed. It takes hours to wind down.

“Fortunately, Paris is a buzzing place that celebrates artists. You’re welcome and a mini-celebrity anywhere you go.

“Restaurant owners almost empathise with our needs as artists, they get it. It’s a nice thing, you walk in and they go ‘oh, the dancers from the Moulin Rouge or the Lido, make sure they get a nice table, put them at ease’.

“I remember one time I was sitting at a table with my gorgeous crew and I looked around and there was another table of Crazy Horse girls who were just perfection, and another table of Lido girls.

“Each company has a different look. The Crazy Horse girls are smaller little vixens; they’re sensual and move like cats.

“The Lido table was like the land of the giants, six foot and above. They’re sitting over there in their languid way, looking nonchalant and elegant. Our table was the spunky, perky loud table. Then you’d have your magicians being all quirky in a dark corner.

Ms Burgess met her husband Ben Nicolodi, an Italian acrobat from a circus family who also worked at the Moulin Rouge, and the pair set up an internationally renowned production company, living lives of complete creative and professional freedom.

“We don’t have kids; never has been a priority and never will be,” Ms Burgess says.

“Our life is enough; it’s plenty. We have a thing called freedom that a lot of people don’t have. We’re very conscious of that and how it can be snatched away from you. If you’re not careful, you can find yourself in a position that doesn’t work for artists.”

Smart and business savvy, Ms Burgess knew her body couldn’t take the strain of full-time dancing forever and spent seven years training as a singer while she still had a regular income.

She now runs her own show, Cabaret du Paris, which tours Australia and New Zealand. As the lead singer and dancer, she’s in demand at casinos and corporate events.

Ms Burgess will be one of the highlights of the upcoming French Festival at Kings Beach and says crowds can look forward to a feisty and ‘zhushy’ show which will combine her showgirl act with singing French pop songs with band the Red Cherries.

Looking back at her career, she’s grateful her parents saw her talent and encouraged her to stick with her dance lessons from an early age.

“It was all very hard but I look back and go, yeah, this is everything I wanted to do. I accomplished it to a T and then some; I didn’t leave any stone unturned.

“I’m now nurturing the next generation of dancers, mentoring young ladies and guys, making sure they work well because it’s a job that needs to be done with reverence.

“Any time you go scantily clad on stage, you have to be aware of the culture behind it. You have to be sensitive and make sure what you’re portraying is understood by the audience and their minds don’t wander off into their own version of it.

“It’s a profession, a skill set and an artform. You have to be an elite athlete to do it for a start.

“When I do casting, I have a checklist of about 25 things – height, beauty, grace, danceability, personality, grooming, presentation, leg length, ability to work as a group, costuming, attitude on stage and in the team.

“It’s a privilege to have this job. People want to see lust for life, joie de vivre. They want a dream and that’s what we provide.”

The Cote du Soleil Sunshine Coast French Festival is on at Kings Beach amphitheatre on Saturday July 28 and Sunday July 29 and is proudly supported by My Weekly Preview.