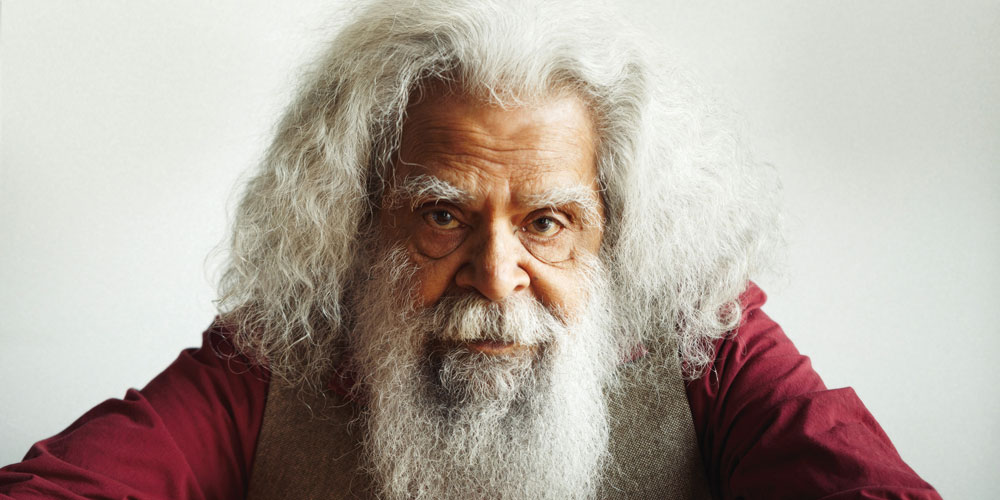 The most admired people in the world are those who have risen above seemingly insurmountable difficulties to find redemption, going on to share their wisdom with others in need of solace. Australian actor Jack Charles is one of those people.

A member of the Stolen Generations, he was snatched from his Bunurong mother at the age of just 10 months and raised in the Salvation Army Boys’ Home in Box Hill, Melbourne. The only Indigenous child there, he was sexually abused and grew up knowing only abuse and neglect, rather than love.

Deeply traumatised and damaged, he became an alcoholic and a heroin addict, a homeless man on the streets of Melbourne, thieving to support his drug habit. He went to jail 22 times and was convicted twice as many times for burglary and drug offences.

It wasn’t until he saw himself in the eye-opening 2006 documentary Bastardy, that he completely turned his life around.

“Through Bastardy I learnt the lesson of being upfront and honest with yourself,” he says. “I’ve put it in the past now, but I never forget it – my past miserable behaviours.”

Those “past miserable behaviours” – and their causes and cures – are the subject of his new no-holds-barred memoir, Born-again Blakfella, which he’ll discuss when he visits the Sunshine Coast. “This book has many stories of my life,” he says. “I’ve had some extraordinary experiences. I’ve had to council myself since the age of 14 and I’ve had to discover things for myself. I’ve led myself down the garden path, sometimes down the wrong track.

“I’ve always been a good person, but that last jail sentence in 2004, I had an epiphany. Aunty Lorraine Peeters came in with a program I undertook. It awoke within me a sense that I did have some power.”

When Mr Charles talks, he barely takes a breath, skipping through time to different eras in his life, as if he’s following a timeline of sadness and trauma, rather than chronology.

He recalls a day that was a major turning point in his life. He’d been living with a foster mother by the name of Mrs Murphy from the age of 14, while he completed an apprenticeship in glass bevelling. His fellow workers at the glass factory knew he had been questioning Mrs Murphy about his family. She told him repeatedly he was an orphan. One day, his fellow workers cajoled him into catching a tram to Fitzroy, where he was ushered into the Builders Arms Hotel by the local Indigenous community.

“Everyone raced up to introduce themselves. One lady said, ‘your mum, she’s livin’ up in Swan Hill, you should go up and see her’. I get home late that night to Mrs Murphy on the doorstep. She’s pretty pissed off with me. I say, ‘joy oh joy, I found mum’.

“I expected her to share my joy because we had been discussing it over the years. She said, ‘no, those people are lying to you, get to bed’. I got very angry. I raised my arm – I see the fright in her eyes. I was going to hit her. I put on my pyjamas and then I was called to the front door. Lickety-split, I was driven over to the Royal Park home for juvenile offenders. That woman called me disobedient and unruly. For the first time I was locked alone in a cell. I remember crying myself to sleep and then began a series of incarcerations.”

After completing his apprenticeship at the age of 19, he went to Swan Hill and found his mother, Blanche Charles. “It was very difficult to meet my mother. She had been alone there and seemed to be ostracised by the rest of the blackfella community,” he says. “I remember the policeman saying ‘Jack, you’re playing the prodigal son. It would be best if you take your mum a carton of Melbourne Bitter. Your mum likes to drink.’”

As sad as his stories are, when you have a yarn with Mr Charles, you end up laughing. He’s a real character and a born performer. Famously, he was involved in establishing Indigenous theatre in Australia, co-founding Nindethana at The Pram Factory in Melbourne in 1971. And now, having sorted himself out, he wants to use his platform to help change attitudes towards Indigenous Australians.

“All governments through the ages have flatly refused to place Aboriginal education onto our state school’s curriculum,” he says. “It’s too hard for them. We’re not ready yet to have this conversation, even today.

“Each state has its own unique history of invasion – not allowing Aboriginal people to have land, right back to the 1700s. The point is, my responsibility is to try and educate. We should have truth and reconciliation bled onto our state school’s curriculum.

“The governments aren’t ready – left wing, right wing, all the colours. None of them are ready. I get invited to private schools and jails and people see me as ridgy-didge, an elder statesperson. They like to hear what I gotta say. My job is to remind them Australia has a unique history.

“It’s only us in the arts – we’re the ones that have been bringing elements of history onto the stage. Lots of schoolkids are coming to see the performances, but that’s as far as it goes. I’d like to see the conversation taken further.”

Jack Charles: Born-again Blakfella is on at The Events Centre on August 24 as part of the Horizon Festival. Proudly supported by My Weekly Preview.
Visit theeventscentre.com.au for tickets.