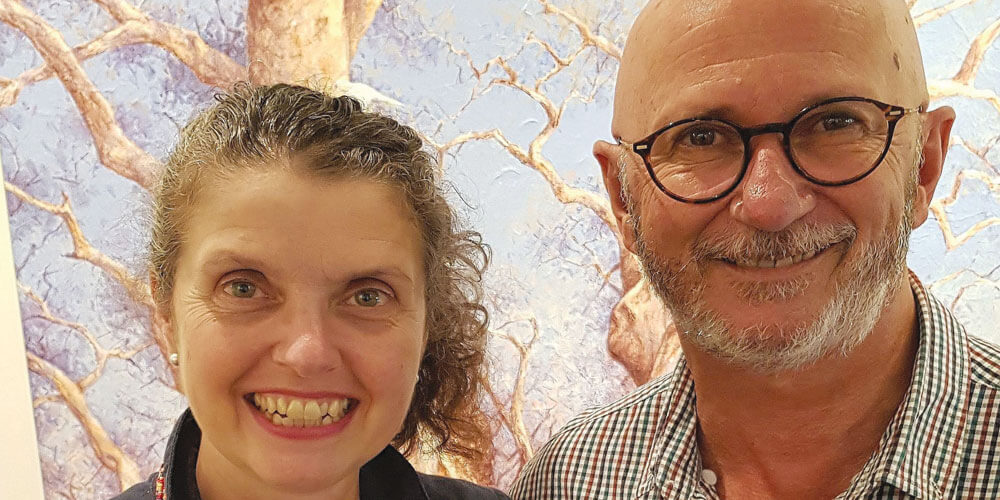 Jane Caraffi and Tony Gill with the painting Through the Gums, Condamine River by Tom McAulay

The Sunshine Coast is known not only for its beautiful beaches and stunning hinterland, but also its thriving art scene. That’s largely thanks to Jane Caraffi and Tony Gill, who have been key players  in promoting Sunshine Coast artists for the past 24 years.  In acknowledgement of their contribution, they won the creative award at this year’s Sunshine Coast Australia Day awards.

The Montville couple is best known for their gallery,  Art on Cairncross at Maleny, a stalwart on the art scene for the past 17 years. But they’re also behind the now-coveted Sunshine Coast Art Prize and the popular Art Gallery Trail, which began in printed form and is now a website directing art lovers to private and public galleries, artist’s studios and exhibitions.

Mr Gill and Ms Caraffi found art before they found each other at a tourism event in Montville in the 1990s. Mr Gill  had left hospitality to run an art gallery in Montville and Ms Gill, a nurse, was pursuing photography. They hit it off and opened Art on Cairncross soon after, a much-loved gallery that has been introducing the world to Sunshine Coast artists now for 17 years.

“The funny thing is, because we both came from other backgrounds, we’re always being asked, where did you do your degree?” Ms Caraffi says. “Neither of us has. We often joke and say nobody would employ us now, what else could we do? But I wouldn’t actually want to do anything else.”

Ms Caraffi grew up in London surrounded by art, her passion being stoked from a young age.

“My father was a mad keen hobby artist,” she says. “We lived in Wimbledon and I got exposed to the most incredible selection of art in central London. As children, we quite often got to go to his club and help hang exhibitions.”

She recalls the first painting that had an impact on her.

“I remember the first time I saw a work of Turner’s, being a little bit perplexed and realising the longer you looked, the more you saw. One of the reasons we love having children  in the gallery is they will tell you things you won’t have seen yourself. Particularly in that age bracket of about nine, they are very honest. They’re not worried about saying the  wrong thing. They’ll just tell you what they think, which  can be funny.

“One of the things missing in education is teaching children what’s outside the front door – the beauty around them. Once they can see the beauty that’s in art, then they can see life in a different perspective. It can’t all be about a screen. It’s about appreciating and if you can’t appreciate, you don’t have respect for things.”

Ms Caraffi and Mr Gill feel privileged to do the work  they do and have nurtured strong relationships with many artists over the years, seeing artists through family tragedies and illnesses.

“One of the really big strengths for us is that we have had a very loyal stable of artists,” she says. “A lot of our artists have been with us since the very early days. We realised very early on they are the people with the expertise about the art.

“We’ve learnt so much from our artists and continue to. It doesn’t stop, like anything in life. If you stop learning, you really stop.

“Tony’s been really involved with the tourism boards  all the way along, not just in the hinterland but also in Caloundra and with Visit Sunshine Coast in all its various incarnations. Things like seeing the need for a really good  art prize. He was instrumental in getting the Sunshine Coast Art Prize going. I was there when the first conversation happened. The then-mayor Don Aldous was at a school art exhibition and he said we need more things like this around the Coast. Tony said, ‘absolutely, we need a proper art prize’.”

Mr Gill also saw the need for the establishment of an art trail early on. “There’s always been a very vibrant art scene on the Sunshine Coast, particularly up in the hinterland since the ’60s and ’70s,” Ms Caraffi says.

“There’s an incredibly strong base of visual artists in this region, on top of the writers and performers. One of the things about visual art is it’s often been portrayed as a slightly elitist field in history. We are breaking down those barriers and promoting this idea that it’s for everybody. There’s still a long way to go, but it has been changing.

“It has been improving on the Coast but there’s still an enormous need to keep promoting the idea we do have some incredibly special people here and we do have a very strong professional art scene, and people are coming here for that.

“We have some fabulous beaches but we’re the only place in the world with the Glass House Mountains and we’re the only place that has access to the two with no distance at all between them. Then you add in the vibrance of the art and everything else that is going on. There’s an awful lot that people still need to learn about the region.”

Continue Reading
You may also like...
Related Topics: Art, Art on Cairncross