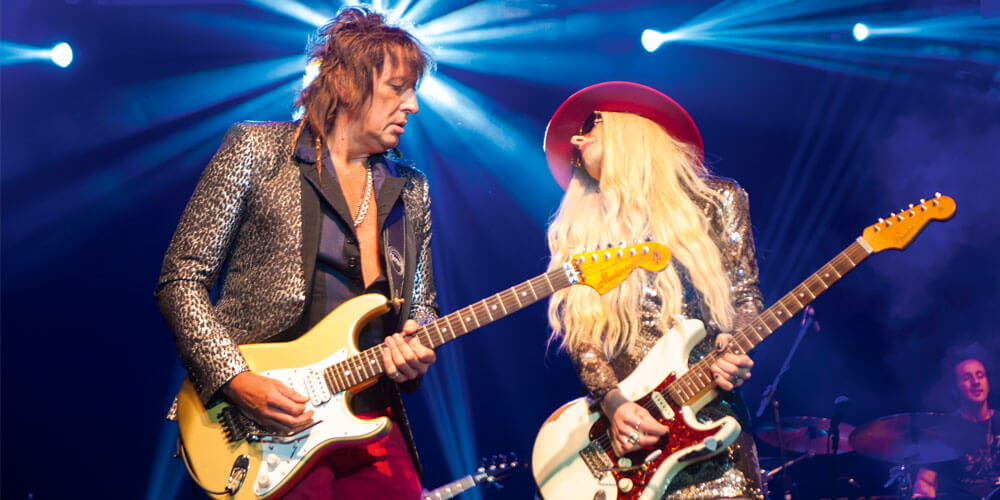 ‘Sincerity’ – it’s not a word that comes to mind when you think of a guitar-playing rock legend.

Yet, it’s a word that former Bon Jovi guitarist Richie Sambora does not take lightly and he has carried it through his 30-plus year career.

“Sincerity. That’s the biggest thing anyone has going from them,’’ he tells My Weekly Preview.

“Sincerity is about love – we are coming there to spread our sincerity and our love. That’s what we’re gonna do.”

He is talking about his upcoming tour of Australia’s east coast with fellow guitarist and partner Orianthi Panagaris.

A success in her own right, Orianthi made headlines around the world for her work with Michael Jackson in 2009 on his ill-fated This Is It comeback tour.

“It was an amazing experience working with him,” she reflects.

“He was a very kind and inspiring artist. He chose me from YouTube clips and reached out through MySpace.

“Rehearsing with him was very surreal. It was so sad that he passed, it felt like a crazy dream actually. Michael definitely pushed me to get out of my comfort zone while playing.”

The performer, who hails from Adelaide, has also shared the stage with the likes of Santana, Prince and ZZ Top, and she was the first female member of Alice Cooper’s band.

Now, Orianthi and Richie have joined forces under the name RSO to release the five-track EP, Rise.

It encompasses elements of rock, blues, pop, R&B and country – sounds they will belt out when they perform at The Shed at Downunder Drive on January 11.

It is the first time the couple has hit Australian soil since their performance at the 2016 NRL grand final.

“We had a wonderful time as usual, as we always do in Australia,” Sambora says of his last visit to the Sunshine Coast.

“I don’t believe I’ve ever had a bad time in Australia so there you go. And the old days, it’s all become a blur.”

So, what can fans expect from the show? And how much has changed since Richie’s Bon Jovi guitar-shredding days?

“It’s the same sincerity, and the same throw down. You do the best that you can do – that’s how it hasn’t changed.

“I mean, obviously, if you look back and go, I’ve got 30-odd years behind me of all this life experience and everything I’ve experienced in this business, that’s different.

“But basically it stays the same because every day you go out and you do your best.

There is no denying that this model has worked. Richie has sold in excess of 130 million albums worldwide, co-written more than 20 Top 40 hits and 11 Top 10 hits and played to 34 million people.

It is a feat that last week earned him, and his former Bon Jovi bandmates, the honour and announcement they will be inducted into the Rock and Roll Hall of Fame.

And, while long-time fans are excited by the news he will perform with Bon Jovi at the Rock Hall ceremony in April, for now Richie is completely focussed on his work with Orianthi.

“Between touring, coming out with a new record, and trying to build a great new thing and recording, and a little bit of family, and travel, there is a lot going on.

“There’s two-and-a-half full albums that we have recorded, so it’s just a matter of time before they put [the EPs] all together.

“We’ve defiantly explored [many of] the genres and hopefully owned them in a way they are sincere enough that people will get the spirit of our recordings.”

So, the goods are there, but is it difficult for Richie and Orianthi to live and work together?

“That’s a trick question isn’t it?’’ he laughs.

“It’s all positive. It’s all shared and we do sit at the kitchen table because that’s where the studio is and it’s always different.

“We spend a lot of time together but we are so comfortable around each other,” Orianthi adds.

“After close to four years, we know what works for both of us. The positives are being able to share experiences together.

“[I’m] so happy to share the new music with everyone. I’m super proud of our work on this. Working with Richie has been so great.

“We continue writing all the time together; it comes very naturally. He is an amazing lyricist and writer.”

Not bad for a guy who began his musical journey on a less celebrated instrument.

“The accordion was my first instrument and I still play it,’’ Richie says.

“I just bought a new one not too long ago, it’s fabulous. But I couldn’t get any dates playing accordion so I switched to guitar.”