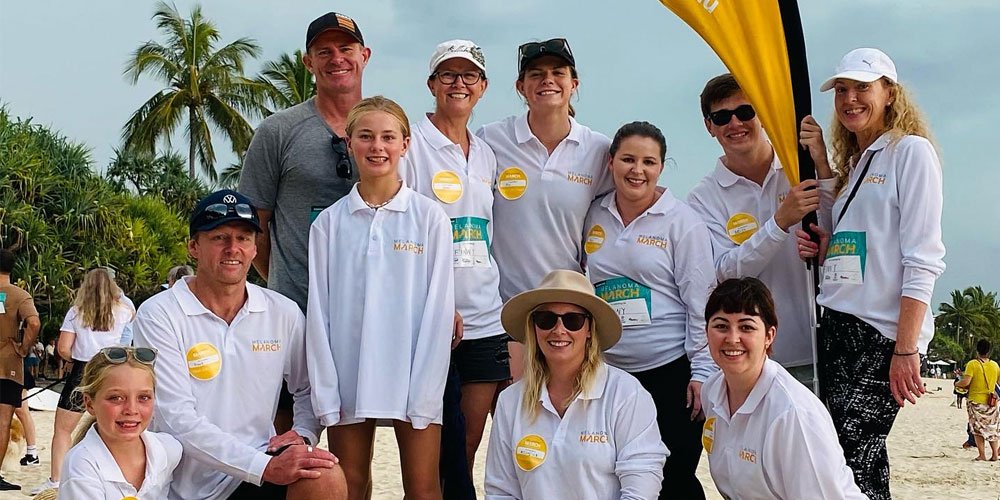 Big crowds turned up for the Sunshine Coast Melanoma March earlier this month.

We live in a country with the highest melanoma rates in the world. One Australian is diagnosed with the deadly form of skin cancer every 30 minutes and 1300 Aussies will die each year from it.

Melanoma is particularly dangerous because it develops in the skin’s pigment cells, known as melanocytes, and can spread via the blood and lymphatic system to organs like the lungs, liver and brain.

The good news is, if caught early, 90 per cent of melanomas can be cured by surgery and with new advances in treatment and technology, the five-year overall survival rate for advanced melanoma has increased from less than 10 per cent to greater than 50 per cent in the last decade.

According to the Melanoma Institute Australia (MIA), in 2011, melanoma was Australia’s seventh most deadly cancer. In 2021, melanoma was Australia’s eleventh most deadly cancer. Recent advances in treatment pioneered by MIA clinicians and researchers have tripled the life expectancy for advanced melanoma patients, proving the research is working. In fact, MIA’s ultimate goal is zero deaths from melanoma by the end of the decade.

It is a goal MIA CEO Matthew Browne says is well within reach, thanks to major annual fundraising campaigns such as Melanoma March, which brings together melanoma patients, their families and communities to raise awareness and funds for research.

“The event started 11 years ago in Manly as a simple march to walk in unison as a community to raise awareness and ultimately fundraise for a national research project that would benefit all of us,” Mr Browne says. “It built from there to the point where this year we have 17 marches across Australia and prior to COVID we had 24. All of the money raised goes to MIA for research.

“We are delighted we are able to return to physical events this year and we will build it back up again over the next few years. We have had a big response, which suggests people are very supportive of the work MIA does. They realise research is ultimately where we need to be to solve this disease.”

This year, Melanoma March is aiming to raise $1 million for a world-first clinical trial of a Personalised Immunotherapy Platform, which could transform cancer treatment across the globe and ultimately save many thousands of lives.

Currently, 50 per cent of advanced melanoma patients don’t respond to or develop resistance to the immunotherapy treatment. The clinical trial is to test a Personalised Immunotherapy Platform designed to ensure these patients get effective treatment the first time, based on their own genetics and tumour biology.

“Advanced melanomas that spread throughout the body would have been a death sentence 10 years ago. Patients might have been given six months to live and a small percentage survived a year. These days, 50 per cent of people with advanced melanoma are disease free. It all starts with clinical trials and we are at the forefront of that. Ultimately these treatments such as immunotherapy are eventually approved and broadly accessible to the general public.”

“In that report it estimated 18,000 people will die within five years of diagnosis by 2030 if we don’t do anything further. Our goal is to reduce that number substantially,” Mr Browne says.

To find out more about Melanoma March or how you can help raise awareness visit melanomamarch.org.au

Sunshine Coast resident Raphael McGowan knows all too well the devastation of losing a loved one to melanoma. His sister Tess was just 30 years old, newly married and five months pregnant with her first child when she was diagnosed with melanoma in 2011. Sadly, just 12 months later she passed away, leaving behind her husband and daughter Mabel.

In her memory, Mr McGowan started a fundraising page for the Melanoma Institute Australia to learn more about the insidious disease and share his newfound knowledge with others. This led him to develop bakslap, a device designed to help apply sunscreen and lotion to the tricky-to-reach places on our bodies.

“I wanted to breath some new light into it in a positive way,” Mr McGowan says. “A good way to do that was to come up with a talking point. Backslap was by far the simplest. It’s more about the packaging and the messaging around it. It’s the core of why I created it.”

Raphael has raised more than $80,000 for melanoma research over the years, hosting cycling events and fundraisers, and he is responsible for bringing the Melanoma March to the Sunshine Coast.

“I helped out when I was living in Sydney and working with the MIA. It just made sense that when I moved back to the Sunny Coast, I would start the walk here because you really do need someone to drive it,” he says.

This year, the Sunshine Coast March took place at Noosa earlier this month, and despite the rain, the crowds turned out to show their support.

“A big part of raising awareness about melanoma is involving community to understand the high rates we have here on the Sunshine Coast. When you have an event such as Melanoma March, people will say things like, ‘oh I’ve been impacted by melanoma’ or ‘I’ve never been for a skin check’. It’s about creating a conversation,” Mr McGowan says.

“The first year we had the march, a guy said to me, ‘I went and got my first skin check because of the march.’ There are probably lots more we are not even aware of.”

“Melanoma is highly preventable. It’s about being aware at an early age and getting your skin checked every 12 months,” he says. “Be cautious when you are outside, especially in Queensland where the UV level is always above three all year around, particularly between those danger times of 10am and 2pm.

“If you are going for a surf, wear a rashie or a T-shirt. Simple precautions can save your life. We really want to avoid the worst-case scenario, which is losing a loved one.”

A story of survival

One of five siblings, Chris Wilson grew up in southeast Queensland during the ’80s and spent his youth enjoying the great outdoors. Whether he was playing sport, fishing or surfing, he did so without a care in the world. Not surprisingly, skin cancer was the last thing on his mind.

“I was a typical Aussie kid who would ride his bike around the neighbourhood during the summer months without a shirt or hat on,” Mr Wilson says. “Every school holiday we would spend hours at the beach surfing every day with maybe just a bit of zinc on our nose and lips.

“Even though we were being told to slip, slop, slap back then, being 21 and bulletproof, we really didn’t take much notice. There was a certain bravado among young men and women,” he says.

It wasn’t until Mr Wilson’s father was diagnosed at the age of 50 with a significant level-four melanoma that he first discovered how serious this form of skin cancer was, and more importantly, that it now put him in the high-risk category of developing a melanoma himself.

“It started with Dad, then my sister, then my other sister, and in my late twenties I had my first melanoma removed from my shoulder,” he says.

Between his father and three of his four siblings, they have had more than 50 melanomas removed so far.

Through regular skin checks every 12 months, Mr Wilson has had several skin cancers and melanomas detected and removed. These would otherwise have taken his life. In fact, one very nearly did.

“I was 39 years old at the time when my wife noticed a very small black mark at the top of my head,” he says. “I wasn’t really over-panicked about it. I was going on a fishing trip and said I would get it checked when I got back.”

A few weeks later Mr Wilson was diagnosed with a nodular melanoma, a very aggressive melanoma that grows straight down into the dermis.

“I was in surgery within a week and had about 38 stitches in my head,” he says. “I felt so lucky, another couple of months and it would have been a different story.”

But just 12 months later he found a lump in his neck and was told the melanoma had metastasized.

“The lump grew from the size of a peanut to a grape within a month,” he says. “I saw my GP and he wrote me a referral to have a biopsy. Of course, life gets busy and I put the referral on my desk and forgot about it.”

It wasn’t until he saw his skin specialist a few weeks later that he discovered the potential seriousness of the lump.

The melanoma from his head had moved to his lymphatic system, requiring a major operation to remove the lymph nodes in his neck. “That was melanoma number two or three and I am up to 11 now. Regular checks are what’s keeping me alive.

“The scary thing is there are no symptoms. That’s why I would urge everyone to keep an eye out for family and friends. If you see a mole that looks a bit odd, particularly in places they can’t see such as the top of the head or back, let them know; tell them to get checked.”

These days he is passionate about spreading the message that just because you stay out of the sun doesn’t mean you are not high risk.

“If you have it in your family, you can get melanoma where the sun doesn’t shine,” he says. “My mum has seen more sun than I ever have, and she has never had a melanoma. If someone in your family has had melanoma, you should be getting regular check-ups.”