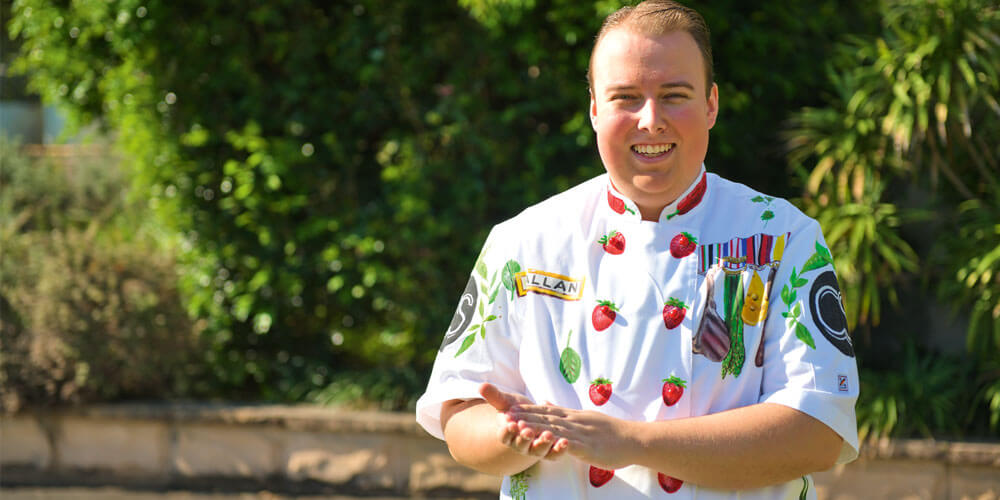 What’s not to love about a perfectly executed macaron? How about one with an entirely new flavour combination that will blow your mind?

That’s what Masterchef 2017 contestant Callan Smith promises to deliver when he conducts a cooking workshop at the Sunshine Coast French Festival on July 28.

The Sydneysider spent a week in the kitchen creating the perfect recipe for extra virgin olive oil macarons and he says they are easier to make than you might think.

“Macarons are undeniably French and I will break down the veil to show you that it’s not hard to do them at home yourself.

“Olive oil is something you put on salads, but it has an endless range of capabilities.

“I love turning things on their heads and as far as I’m aware, I have never seen any olive oil macarons. It may not make much sense, but it has all the characteristics to transform the ganache filling on the inside into something spectacular,’’ he says.

Experimentation in the kitchen has always been a passion for Mr Smith, who was in high school when he applied for Masterchef and just 18 years old while filming the season.

His final dish, Sushi for Dessert, which was created in an elimination cook-off in Japan, was described by the judges as “bonkers but brilliant at the same time”.

“It’s a learning process and out of every failure comes success. The first dish I ever created was a birthday cake for my grandfather when I was eight. I woke up at 5am and went to the kitchen by myself and while I knew in my mind what goes into a cake, I had no idea of quantities, so I ended up with a one-centimetre brick Milo cake and that was his birthday cake.

Mr Smith says Masterchef has opened all sorts of doors for him in the food industry and he is thriving in his niche of combining food and theatre for unforgettable dishes and dining experiences in his pop-up shops and catering business.

“Everything I do links back to theatre and eventually I want to open up a theatre restaurant that’s completely turned on its head,” he says. “I am in the middle of writing a musical that will revolve around food and that will be the perfect combination for me.

“For me, the role of theatre is not just to entertain, but to evoke a message and that’s what I always try to do with food as well.”

While Mr Smith admits French cuisine is not something he often creates, he uses many of the techniques developed in France to execute his creations.

He encourages all home cooks to give new things a try, because many of the cooking techniques are “not as hard as they seem”.

Sunshine Coast French Festival director Lynette Croft has secured a number of past Masterchef contestants to conduct cooking demonstrations, which are included in the $10 festival entry price.

The festival also offers Francophiles the opportunity to join specialty fromage, wine and champagne masterclasses with experts in each field for an additional fee.

To find out more, visit sunshinecoastfrenchfestival.com.au.

Continue Reading
You may also like...
Related Topics: Masterchef