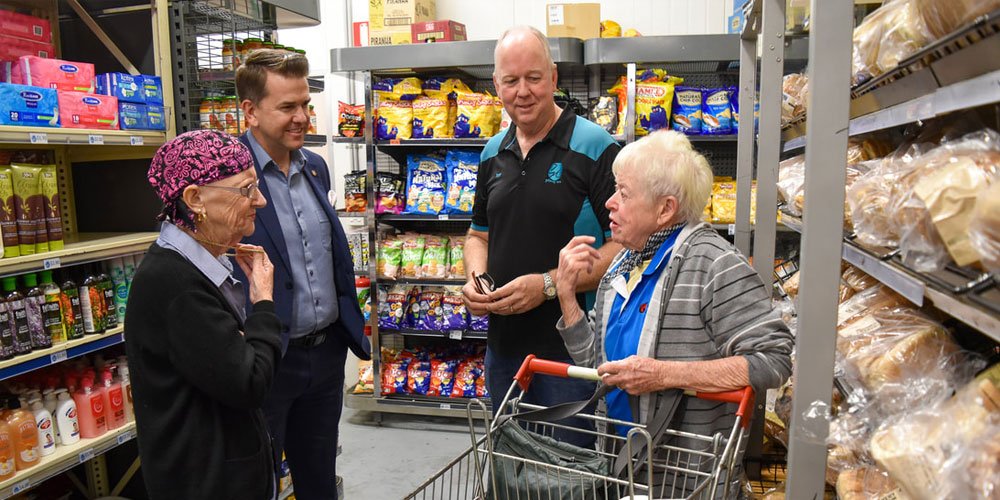 Just three years after being recognised as Citizen of the Year in the 2019 Sunshine Coast Australia Day Awards, Caloundra resident Debra Knight has yet again been recognised for her selfless support of community members in need through her work at Gateway Care.

After more than 17 years providing support to thousands of families, Ms Knight was one of nine Sunshine Coast residents recognised in the recent Australia Day 2022 Honours list, receiving a Medal of the Order of Australia (OAM) for her service to community through charitable organisations.

“I feel so humbled and so honoured,” Ms Knight says. “I am always behind the scenes and I just do what I do. To think that someone has nominated me for this award is so heartwarming and I plan to keep up the work for a long time yet.”

Gateway Care is a community hub that has been running for almost two decades. Working with families and community groups to strengthen and support others, it offers a range of services including food rescue, low-cost groceries and a cafe where people can go for a low-cost meal, a coffee or a chat.

Ms Knight has led a team of volunteers who have worked tirelessly to keep the low-cost grocery store not only operational for the past 17 years, but has transformed it into a place for people to gather, connect and stave off loneliness by talking with others who are ready and willing to listen.

Since taking over the leadership position in 2009, Ms Knight has grown the Gateway Care program to more than 13000 families on its database, with at least 1400-plus families being supported with low-cost groceries each week.

“Anyone with a Centrelink or Pensioners card, or anyone doing it tough, is more than welcome to come into the centre at Caloundra and we will help them with food. No one will walk out of Gateway without food in their trolley,” Ms Knight says. “What people can save at Gateway, they can use to take their children on an outing or pay a bill.”

Working with other charity organisations including SecondBite and Bidfood, as well as food donated by Coles, Woolworths and Aldi, Ms Knight says Gateway Care rescues one million tonnes of food each year.

“We source our bread and fruit and vegies from Coles, Woolies and Aldi and we source fresh fruit and vegetables from SecondBite. We also receive food from Lighthouse, and Bidfood are a big supporter of Gateway,” Ms Knight says.
“I am so grateful to each and every one of them.”

Not surprisingly, Ms Knight says since the onset of COVID-19, the demand for low-cost food has risen by 50 per cent, putting extra pressure on charities.

“It’s essential to double what we do to feed more families,” she says. “Sunshine Coast Council has very kindly donated a block of land at Currimundi for us to open a second store, but we need to raise $4 million to build the new facility.”

Local businesses and individuals can help by donating to Gateway Care’s Random Act of Community Kindness (RACK) initiative that allows people to purchase vouchers families can use toward much-needed groceries.

“A business might come in and donate $300; that goes to RACK and we can then distribute 10 $30 food vouchers to those who need them most,” Ms Knight says.

Describing her experience with Gateway as “a calling”, Ms Knight says what began as a one-day-a-week volunteer role almost two decades ago quickly grew into a full-time position at the helm of the organisation, a role she relishes in.

“I had just finished another job and I was looking for something different,” she says. “Something was missing in my life. I saw the advertisement looking for volunteers for Gateway, so I went and had a look and here I am 17 years later.

“It was exactly what I was looking for, which is helping people. Getting food on to tables and into the tummies of people doing it tough is the biggest reward.”

No stranger to doing it tough herself, Ms Knight says as a former single mum, she has always had empathy and compassion for those who need a hand.

“I know how people feel when they haven’t got a lot,” she says. “Hand up not hand out, that is what we are all about.”

In more recent times, Ms Knight has faced her own serious health battles, having been diagnosed with pancreatic cancer two years ago. However, despite undergoing several operations and many rounds of chemotherapy, incredibly, she continued her work at Gateway Care.

“I still worked from my hospital bed; that was great therapy for me,” she says. “When I had my chemo, if I felt well, I would go to work, no good sitting at home. That’s how I cope with things.

“You must have a positive mind. The day I was diagnosed, I said to my husband and daughter ‘I have too much work to do on this earth to go anywhere’.”