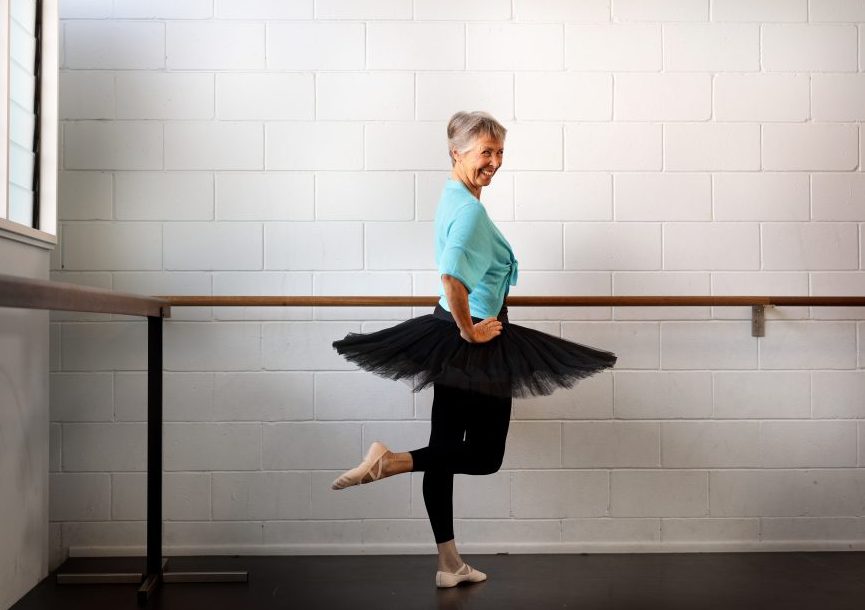 How do you see yourself in your seventies, eighties or nineties?

Could you picture yourself doing pliés at the barre clad in lycra? How about skydiving at 15,000 feet? Or maybe spending 10 hours a week on the green chasing an elusive hole-in-one?

It’s all possible and as Seniors Week approaches from August 19 to 27, it’s time to celebrate the region’s over 55s, who are continuing to take life on in full throttle.

Just over one-third of the Sunshine Coast population is made up of seniors aged 55 and over, so it wasn’t hard to track down seniors who are stunning the community with their drive, determination, and passion for what they do – in fact, it was hard to pick just a few to feature.

But before we get into their individual stories, let us share a few words of wisdom from University of the Sunshine Coast lecturer in psychology, Dr Prudence Millear.

Dr Millear says the key to living a happy, healthy, and fulfilling life in your golden years lies in one simple thing – having a positive attitude.

“There’s quite a bit of research to show that people who have a positive self-perception of ageing live on average seven-and-a-half years longer than others who don’t,” she says.

“The more you do it, the easier it is to do. It’s a virtuous circle, if you think about it that way. It is, of course, harder if you are unwell, but it still matters that you see life as still worth doing.

“One of the best things you can do is to be grateful for what you have. You may not be as fit as you used to be, but if you’ve woken up to a glorious winter’s day and the sun is shining, that is something to be grateful for, as are the people you have around you.

“It is all about an attitude, it’s all about the way you see the world. If you think it’s hard and horrible, that’s what you get back.”

And while some in society may be quick to tell you that you are ‘too old’ to do something, Millear says seniors can easily choose not to hear this and ensure they are doing all they can to keep their bodies strong, their minds active, and stay socially connected.

“Don’t listen to them, listen to your inner child, have fun with life. Life’s too short to spend it with dull people, so go and find some interesting ones.”

Although Jeanette Thomas spent her teens and early twenties working as a professional dancer for the Borovansky Ballet (a precursor to the Australian Ballet) and then in musical theatre, her husband and three children had never seen her dance until she joined Lyn Fitzsimon’s Adult Dance Circle classes at the age of 73 and rekindled her passion for dance.

Jeanette studied under Phyllis Danaher, the founder of Ballet Theatre of Queensland, and was performing for the Borovanksy up until it closed. It was then that she found musical theatre and spent 10 years performing in Australia in productions as varied as My Fair Lady, Hello Dolly, and How to Succeed in Business Without Really Trying.

“I just went from musical to musical and then a colleague and myself decided to work on a cruise ship doing cabaret, but we didn’t come prepared with the right documentation and landed in England without a plan,” Jeanette says.

“Within a year, I’d met David and fell head over heels in love. Life then took a very different turn and I continued work as a secretary before becoming a housewife.”

The couple moved to the Sunshine Coast in 2006 and Jeanette discovered the Senior Swans ballet class 18 months ago.

Despite having a double hip replacement 10 years ago, she overcame reservations her body “wouldn’t be able to do what it used to,” and hasn’t looked back.

“After being a performer, you never get that real high that you experience when you are a dancer in being able to express yourself in that way,” Jeanette says.

“Even though the body doesn’t react as you’d love it to now – I’ll never get my turnout back and pointe is out of the question – you still get an awful lot out of your soul with the music and the movement.

Jeanette says there is a real social element to her classes, allowing her to connect with people aged in their thirties through to their seventies. They come from a range of backgrounds, with many doing ballet as young children and others who are picking up the art form for the very first time in the Senior Swans class.

“My husband and I walked and I used to go to the gym a bit just to keep alive and moving, but it doesn’t inspire you much,” she says.

“With dance, you not only get the movement, it also improves your balance, agility and general health. I just feel so good when I’m dancing. It just steps inside you, that’s the thing I think, you realise how much you’ve missed it.”

Determined to take her passion as far as she can, Jeanette is again taking the Royal Academy of Dancing exams through the studio.

“It brings back the memories and it’s quite nice to re-enter that discipline again,” she says.

“I would say to anyone that they should give it a go. It can feel daunting, but once I set foot in the studio, I felt completely at home and Lyn has this way of teaching that allows people of all dancing ability to have a great time and learn new skills.”

You would be forgiven for thinking it is slightly nuts to jump out of a perfectly good plane at the age of 70, but to do it twice more at the ages of 85 and 86 takes a special kind of crazy.

But passionate youth mentor Bob Sherwell would do just about anything to help troubled Sunshine Coast kids to have a better future. And even when it meant skydiving to raise money for programs to support at-risk young people, it was a challenge he embraced willingly.

The Buderim resident first tried skydiving when he was 70 years old.

“My wife was overseas and I thought I’d give it a whirl,” he says.

“I enjoyed the adrenaline rush and when I turned 86 last year, I thought I’d do it again. Fran was not terribly enthusiastic about that, so we agreed that if I was going to do something stupid, I should make some money out of it.”

Bob jumped at 15,000 feet, alongside granddaughter Ashleah Taylor to raise vital funds for the Potential Project for Al Taylor for Kids (ATK).

Allan Taylor, who spearheaded the school chaplaincy movement on the Coast and was a passionate advocate for showing troubled kids their true potential, was Bob’s son-in-law.

He and wife Kari were killed in a car crash in 2009 and the foundation was set up to continue his tireless work. Bob has been one of its biggest supporters.

His skydive in June last year raised $8000 for the program, which is run by John Murphy with the assistance of eight regular volunteers who go into schools around the Coast and work with kids at risk who might be self-harming, disengaging from their education, or living in various abusive situations at home.

They are assisted over a period of eight weeks through school-based programs to unlock their potential and can also attend an annual camp for up to 70 young people to enjoy fun activities and learn about their value as individuals to set them on the right path in life.

Bob jumped again in June this year as part of a new Freefall for the Future scheme, where anyone can earn a skydive, if they raise $1500 for ATK.

“You’d think you get used to it, but even on my third jump, you are up there and the wind is whistling past you while your legs hang out the door and you think, ‘I’m an idiot, why am I doing this?’.”

So far, eight people have taken the leap through the initiative, and the self-funded charity has raised $12,000 through this year’s Freefall for the Future, which is enough to run the program in six schools.

Although Bob says his skydiving days are now behind him, he will continue to mentor young people and share his life experience to prevent them from making avoidable mistakes.

“Older people should mentor younger people and help them to learn, we’ve been around a lot longer than they have,” he says.

“The more of this that happens in our community lifestyle, the better life will be for everybody concerned.”

Every Tuesday and Thursday, Mary Hadden drives herself from her home at Immanuel Gardens in Buderim to the Maroochy River Golf Club in Bli Bli and spends up to five hours on the green playing 18 holes.

It sounds like the life of many a retiree on the Coast, but what makes Mary different is her age. She is 96 years old.

Mary is the club’s oldest member and has been frequenting the new course and the former Horton Park course since she moved to the Coast with her late husband Don in 1982.

Golf has been a passion of Mary’s life for 54 years and started on a bit of a whim.

“I just had a feeling that I would like to play golf and I mentioned it to my husband one day and the next day, he arrived with a set of golf clubs for me. That was Don,” she says fondly.

“It gets you in. It’s a real challenge and you meet so many nice people. My husband used to say that golfers are really special types of people,” she says.

At Horton Park, Mary held just about every committee position at different times over the years, from president to treasurer, handicap manager to veterans delegate – she has done it all.

On top of that, she was the club’s florist, creating nine different arrangements throughout the clubhouse each week.

Although she hasn’t won any competition badges since the Maroochy River course opened two years ago, Mary is still playing with a handicap of 33 and gives the younger players a run for their money while always being impeccably dressed.

“I’m no good at social anything, I’ve got to be playing for something, that’s the point,” she quips.

“I get around on the cart nowadays, I was walking the course until I was 85, but I have no illnesses, no arthritis, not anything and people don’t believe me when I tell them how old I am.

“I will play for as long as I can, who knows when something might give out? I’ll just keep going as long as I can. You’re never too old to play, so just get out there and do it.”