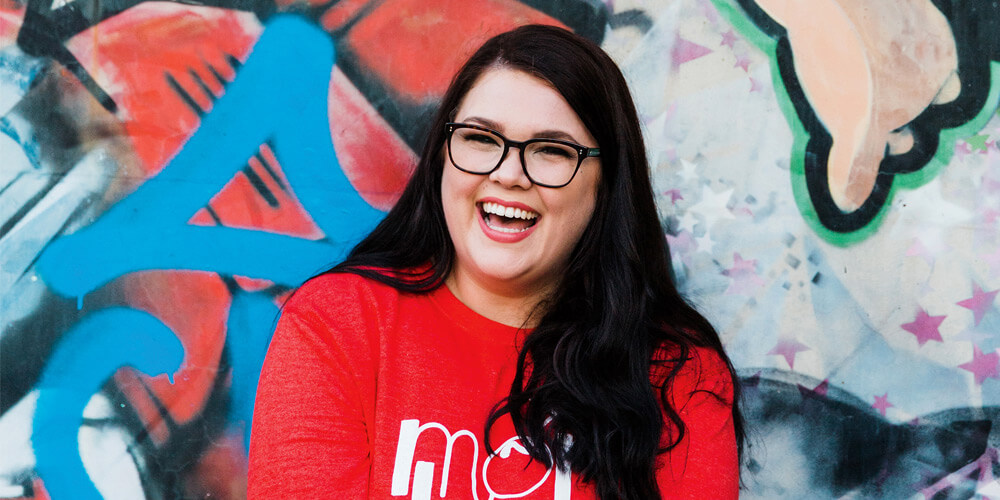 Jessica Townsend’s high school  English teacher always knew there  was something special about her.

Charmaine Rye, who taught her at Kawana State High School, says she was an “English teacher’s dream”.

“I introduced the class to the American poet Robert Frost and I remember Jess coming to me after class and saying how much she loved his words and imagery,” says Ms Rye.

“Her writing piece in response to that task was just amazing. She was able to analyse literature at a level far beyond her years. I used to say she was a 30-year-old trapped in a teenager’s body.

“She was always very eloquent and had  a unique turn of phrase. She was a natural talent, but she was humble about her talents.

“I tried to make her see she was very talented and gifted with writing.”

Now living in Melbourne, Ms Rye watched with tears of pride as her former student addressed the crowd at a book signing for Nevermoor: The Trials of Morrigan Crow, which is being hailed as the biggest thing in Australian publishing in more than a decade.

It debuted at number eight on Nielsen BookScan’s Australian bestsellers chart, making it the biggest debut children’s book in the Australian market since records began.

Eight major publishing houses fought for the English-language rights, with the Hachette Book Group signing off on a three-book deal for the US, Britain and Australia for a six-figure sum.

After a bidding war at the Frankfurt Book Fair last year, the foreign rights were snapped up by publishers in 27 countries.

Simultaneously, the film rights were being hotly pursued, with 20th Century Fox signing on to make the book into what will no doubt be a blockbuster.

With the second book finished and seven more already plotted in her head, the 32-year-old Sunshine Coast local is being called the next J.K. Rowling, an accolade she finds flattering but disconcerting.

“As a Harry Potter fan I’ve been wondering if something is going to show up that would make me feel the way I felt when I read Harry Potter,” Ms Townsend says.

“I think the comparisons are coming from a place of sweet optimism but we’re all deluding ourselves – there is no next Harry Potter.

“This is its own thing. But I’m very much influenced by Harry Potter, I don’t shy away from that. I did grow up with those books.”

Ms Rye doesn’t hesitate to place her in the upper echelons of the publishing world, alongside J.K. Rowling: “I texted my friend after I read it and said, you’ve got to read this book, it’s going to be our childrens’ generation’s Harry Potter.

“She painted it so beautifully with her language and I’m not exaggerating. I think it’s phenomenal and I’m so proud of her.”

Nevermoor: The Trials of Morrigan Crow is a children’s fantasy novel that tells the story of Morrigan Crow, a flawed and unappreciated child born on the unlucky day of Eventide who is fated to die at midnight on her 11th birthday.

When a mysterious stranger called Jupiter North shows up and whisks her away to a magical city called Nevermoor, she finds herself competing in four dangerous trials against hundreds of other children each boasting an extraordinary talent. However, Morrigan sees herself as talentless.

Ms Townsend says she wasn’t trying to moralise as she wrote the book; she just wanted to write a really good, fun story that would entertain her and make her laugh, but it does contain positive messages for young readers.

“Obviously when you’re writing, themes do emerge,” she says. “All of my values are there on the page.

“Morrigan is competing against other children with talents and she doesn’t have a talent.

“In the end, Morrigan figures out talent was never the most important thing. The trials she goes through are testing for more important qualities.

“Basically, the whole point of it is if you’re not honest, brave and tenacious, it really doesn’t matter how talented you are.”

Aimed at nine to 12-year-olds, the book is receiving stellar reviews across the globe and children and their parents are queueing up from Sydney to San Francisco to have their books signed on her promotional tour.

“I had this really sweet nine-year-old girl show up with her mum to the Children’s Festival of Moving Stories [in Sydney] and she had read the book five times in the week it came out.

“It’s really exciting. It has been a crazy whirlwind of a time, but I’m happy.”

Raised in the Caloundra suburb of Aroona, Ms Townsend was one of those kids who always had her head stuck in a book.

Caloundra Library published her first story in its weekly newsletter when she was seven and she still remembers the thrill.

“I loved growing up on the Sunshine Coast, it’s such a gorgeous place to raise a family,” she says.

“When I was much younger I was in the Nippers at Dicky Beach. You’d laugh now because I’m the pastiest person, but I loved that when I was little.

“I feel like growing up on the Sunshine Coast, it still has this laidback attitude, which I really appreciate in my adulthood. It’s the most chilled, laidback place in the world.”

Now living between her family home in Aroona and the UK, she hasn’t decided whether to buy a house and live permanently on the Coast or live an itinerant lifestyle, but she likes the idea of living six months in the UK and six months at home with her mum Tina, who raised her and her four older siblings as a single parent.

“I don’t know anyone who could have raised us and not lost their sanity. She’s 100 per cent proud and couldn’t be happier for me.”

While close to all her siblings, it was her sister Sally, two years her senior, who introduced her to reading.

“Sally taught me to read when I was four,” she says. “I was always stealing her books.

“My first gateway drug was The Baby-Sitters Club and I love Alina Marchetta – Looking for Alibrandi was a formative book for me as a teenager.

“I love John Marsden – I grew up reading the Tomorrow When the War Began series.

“The seeds [of Nevermoor] were planted throughout my childhood with everything I read and watched and loved.”

It’s there she met Charmaine Rye, who she acknowledges in the book as one of her most influential teachers.

“She was my favourite teacher,” says Ms Townsend. “She was so encouraging to me as a budding teenage writer.

“Her feedback on my assignments was like the treasure of my childhood.

“She’d write really sweet, encourage notes on my writing assignments and she made me feel like a writer so many years before I ever wrote for a living.”

After school, Ms Townsend worked at Australia Zoo in the gift shop before Terri Irwin noticed her talents and promoted her to editor of Crikey! Magazine.

She then moved to London to work as a copywriter and it was there she began to work seriously on the book after years of plotting.

“I remember where I was when I came up with Morrigan Crow,” she says. “I was 18 or 19 and at a music conference and I was bored with the keynote speaker.

“I was sorting out a story about a girl who was going to visit her aunt, who was quite eccentric and audacious, peculiar and magical.

“Morrigan came to me as a grown-up character and I dialled it back and imagined what had happened to her as a child to make her so brave and peculiar.

“I was plotting out ideas when I went to London. Nevermoor is a fictional London, a magical London.

“I feel like I did a lot of the plotting of that world during the first two years that I lived there. I took my time, let it gestate, developed layers.”

Ms Townsend started seriously writing the book in 2011 and sent it off to 11 literary agents in 2015. Her first response was a rejection, but it didn’t take long for the floodgates to open.

“I was confident I had written the best book I could write,” she says.

“I’m a bit of a perfectionist and I hate using that word because it sounds a bit smug.

“Perfection doesn’t exist, perfection is kind of crippling in a way. That’s why I held onto it so long.

“Within a few days I had an offer of representation and within a month I had four offers.

“I was checking my emails every five minutes but I was pretty Zen; I firmly believed things happen in the right time and for the right reason.

“When I did choose my agent from the four, I went purely from gut instinct.

“I genuinely hadn’t considered the movie thing. I hit a feeling of shock and awe and I haven’t really bounced back from that yet.

“It probably sounds a bit disingenuous – having a movie made about your book is every writer’s dream, but I was genuinely a bit terrified.

“Everything was happening so quickly. I spoke to the people from Fox and I was thinking, someone is trying to snatch my baby away from me. It was this weird animal instinct.”

When asked whether she sees herself on the red carpet at the Academy Awards some time in the future, she laughs: “I’m an introvert, I would probably stay home and watch it on TV.”

As Ms Townsend thinks back over the 10 years she spent working on the book, she is coming to terms with the responsibility of having legions of fans around the world waiting for the next instalment.

“The books are slated for release every 12 months. This could be the next 15 to 20 years of my life – I’m not sure I’ve thought this through,” she jokes.

“But really, it’s my fondest hope. I think I would have been slightly insane to think it would have ended up as big and crazy as it has.

“I honestly never doubted I would at some stage have a book published, but the way it has blown up is far and beyond anything I could have imagined.”