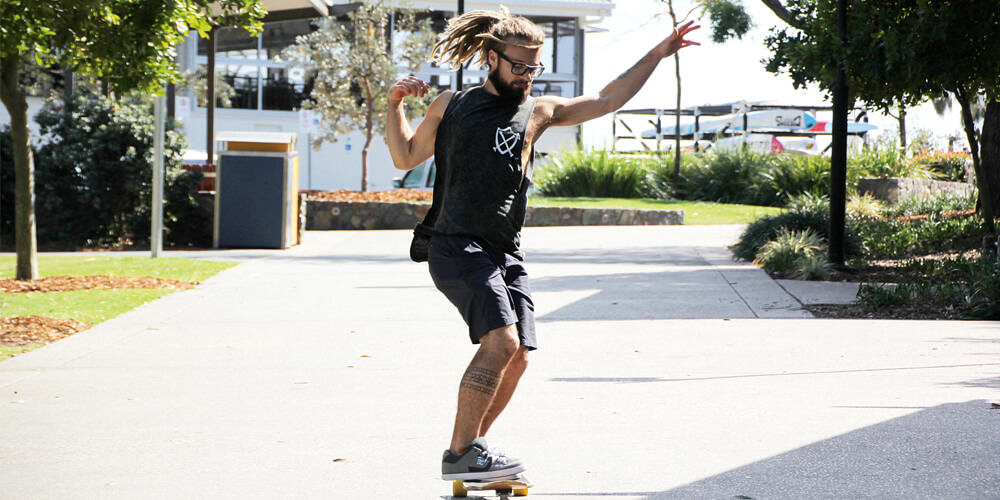 The hairy longboarder stands before a mountainous backdrop at sunset, somewhere in the Californian desert. He surveys the road ahead, puts his earbuds in and takes off, cruising along as he busts some awesome dance moves to a breezy electronic dance track.

The song is Would You Ever by US music producer Skrillex with songwriter and vocalist Jason ‘Poo Bear’ Boyd.

Since its release on July 26, the video has clocked up more than 12 million views on YouTube, turning Mooloolaba’s Milan Somerville into an overnight sensation.

Skrillex and Poo Bear appear briefly at the end of the clip, but the spotlight is squarely on Somerville, with his sheer exuberance and unique dance moves.

The joyful and carefree energy he exudes in the video is infectious and has undoubtedly contributed to the track’s success.

When Skrillex saw Somerville’s YouTube channel, where he goes by the name Sepakuma – The Hairy Longboarder, he immediately wanted to use him in a video.

Somerville was flown to the US on June 25, put up in the gleaming towers of the Westin Bonaventure in downtown LA, and did around eight hours filming over five days near the Joshua Tree National Park.

“I had a blast, it was heaps of fun. I only got to meet him briefly; he was really nice,” he says.

“He gave some direction, though I was given a lot of freedom in what I wanted to do.”

Somerville returned to Australia on July 5 and in the space of two months, has gone from a relatively unknown cleaner and trolley collector at Coles at Sunshine Plaza, to somewhat of a local celebrity who’s now on the hunt for a manager.

“Yesterday I was going to work and some lady was like, you’re that longboarder guy, can I get a photo with you?” he laughs.

“I was like, sure, why not? A lot of the time people will say they saw my videos or saw me on the news and they say I love what you’re doing mate, keep doing it, keep it up.

“I’m like, thank you so much. I get a really positive response. It makes me feel really good.”

Somerville’s girlfriend Manda loves all the attention her man is getting and when they meet people, she’s the first to ask them if they’ve seen his videos.

Manda is the reason Somerville moved to the Sunshine Coast a year ago.

Born in South Australia, he grew up moving between Queensland and New South Wales almost on a yearly basis with his free-spirited mum Lili and four older brothers, completing high school on the Gold Coast.

“Mum just liked to move a lot,” he says.

“As a kid I wasn’t the biggest fan because you get to the school, make friends and have to go to another school.

“It’s not the easiest but as an adult now, it certainly makes you adaptable. You’re able to associate with lots of different people.

“People at school thought I was a bit crazy, but not in a bad way.

“I was the kind of kid who would climb onto roofs or just do random stuff. My mum tells me I was one of those kids who was super chilled and did what I was told.

“Mum was very lenient, she didn’t have too many rules. She’s the best mum ever – I love her so much.”

Emotionally open and genuine, Somerville talks with equal affection about Manda, who works at a local dental clinic.

“One of the best days of my life was when I met my girlfriend because she’s the woman I love,” he says.

“I met her at a small festival in April last year. I had been dancing for a while and I was just chilling out behind the DJ decks and she just popped up and was dressed as a green fairy and had all this vibrant energy and I was like, oh my god, look at this beautiful woman.

“We went to the dancefloor and had a dance, hugged each other and kissed and I thought, oh my god, this is it.

“We’ve been in love ever since. We just chill out together, watch movies, go for walks, go to waterfalls.”

The couple has discussed marriage and Manda likes to point out rings she likes, but for now, they’re happy with the way things are.

Somerville is enjoying his newfound fame and is planning to make a new video for his sponsor, Loaded Boards.

He’s also gearing up for his 25th birthday on September 17, which he’ll be celebrating doing what he loves most – dancing at a bush doof.

“I was at a festival one New Year’s Eve and I danced so much, I danced for 20 hours within the first 36 hours of being there.

“That was the point where I came to the realisation that dancing was what I was meant to do with my life.

‘Dancing is where my true passion is and I’ve been trying to pursue that ever since.”

Caloundra barista on a coffee crusade
Can you help get this project off the ground?