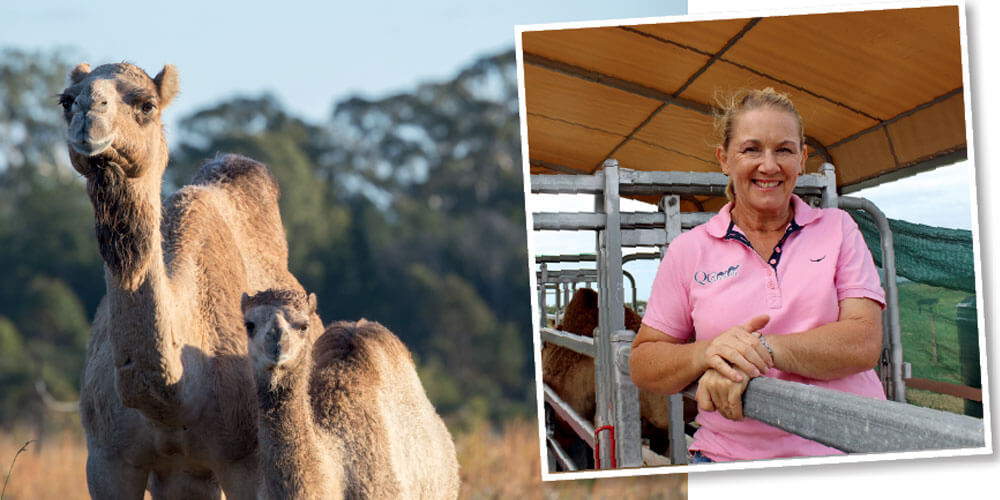 Lauren Brisbane makes no secret about how much she loves camels. As the owner of local company QCamel, she owns 115 camels and says the key to creating the company’s award-winning camel milk products is love and kindness.

“We follow Bedouin traditions on pasture management,” Mrs Brisbane says. “They’re herd managed and they’re not locked up. We produce a great-quality product and that’s a testament to them being happy. If they’re a stressed and unhappy animal, you don’t produce a good product.”

Mrs Brisbane takes pride in not sending any male camels to the abattoir, instead rehoming them and training them for land management and as companion animals.

“Some are trained as ride camels but only by a specific operator who looks after the camels the same way we do. We train our boys to be companion animals, so people can use them for land management, to eat weeds and co-graze with cattle.”

Mrs Brisbane wasn’t always a dairy farmer. She spent her twenties in London as the general manager of a streetwear company, which had four stores in the heart of the city.

“This was in the ’80s and ’90s and I had a lot of fun. I lived in London the way you should live in London, driving a BMW, living in my own little flat and going out to restaurants and nightclubs, nicking off to Europe for a weekend, as you do.”

After returning to Australia, she married and had three children. A big life change arrived when her husband, a mining engineer, moved the family to Emerald and Moranbah in Central Queensland, a move that would lead to her current passion for camels.

“I didn’t wake up one day and think, camel milk, that’s a good idea,” she says.

“We arrived in Central Queensland in the drought in the ’90s and I watched a lot of people go under. Every other week there would be a funeral.  “People who were generational farmers were either shooting themselves or hanging themselves.

“It was nothing they did wrong. It wasn’t bad management – it was because there was a drought for such a long time and they had lost everything. The banks were knocking on the door. I looked at cattle and thought, the imperial life from England doesn’t work in our country. I thought, there’s got to be a better animal than this.”

Mrs Brisbane conducted a self-funded two-year study in which she wrote about the development of the camel industry in Queensland, which she published in 2009.

“The government was proposing a mandate to shoot the wild population of camels in Australia – they shot 120,000 camels and left them to rot in the desert. It was a $30 million project, the largest funded environmental project in Australian history.

“There were problems with wild camels, walking through fences and drinking out of all the waterholes. I thought, we just need to have another focus to manage them.

“When I wrote the study, one of the things my husband and I discussed was if we were going to go into the camel industry, dairy would be our focus.

“Financially it made sense – it’s a health product and there was a market for it.”

Camel milk has a different molecular structure to cow’s milk and is closest in composition to human milk. It contains less lactose, three times more iron and 10 times more vitamin C than cow’s milk, as well as having antibacterial and probiotic qualities. It does not contain the whey proteins that cause dairy allergies.

“One of the things we recognised is that Australian camels are the only disease-free camels in the world. It also appealed to us ethically. We like the way you manage camels when you milk them.

“I certainly don’t have any opinion at all on how other people manage dairy animals; it’s not my business. But I’m a bit of a sook and with camels, you don’t remove the babies from the mothers. We like that. Ethically, that sits well with us.”

While Mrs Brisbane is thrilled with the reception her products are receiving, the journey has not been without its challenges.

Compared with cow’s milk, it’s expensive. You can’t milk a mother without her calf, which means it takes twice as much animal husbandry to produce each litre of milk.  Then there’s the issue of Australian tastes.

“Australians are really parochial,” she says.

“They’re also distrustful of people saying ‘it’s a health product’. But people who drink our milk love it and they always come back. It makes them feel so much better. I think we’re on the right track and we’re certainly gaining a reputation for what we’re doing.”

She’s says when the airport expansion is finished, it will open even more international markets. And after having spent 12 years in the outback, she knows she’s found home here on the Coast.

“I like space,” she says. “I didn’t want to live on a little tiny block in Brisbane. I’m interested in agribusiness and we have beautiful food on the Sunshine Coast.

“When you live in mining areas or western rural areas, all the food is trucked in. A lot of food is kept in cold storage for months before you get it and it’s really poor quality.

“The Sunshine Coast has amazing food. We’re not far from the beach, we live near the mountains, we can go bushwalking and the people are relaxed, so the Sunshine Coast is the perfect lifestyle for us.”

What’s in your backyard?
Launch of the 2018 Sunshine Coast Open House