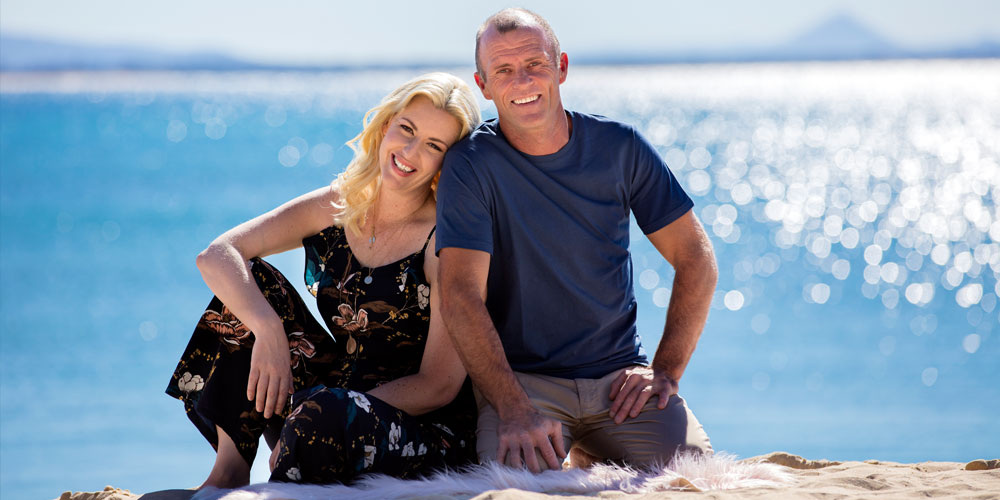 Buderim residents Norm Hogan and Jess Eva were half-joking when they first spoke about applying to appear on Channel Nine’s renovation show The Block in 2017.

At the time, Ms Eva was looking for “something to keep [her] mind busy” while on maternity leave from her job as a Sea FM breakfast show host with her second child Matilda, so she decided they should jump in and “give it a crack”.

While they didn’t make the cut in 2017, the couple will be on your television screens when The Block 2018 season launches later this week.

Mr Hogan, who is a builder by trade, admits that being on TV was “never my dream”. “I was sh***** myself; we arrived down in Melbourne and it was extremely daunting,” he tells My Weekly Preview.

“I wasn’t sure how I was going to go with cameras in my face and for the first two days, I was trying to be so careful with what I shared and what I said all the time, but by the third or fourth day, I forgot about them and didn’t worry anymore. I didn’t care; I was back to myself and I was happy.”

With sleepless nights and tight deadlines a constant pressure on the couple, Mr Hogan says what he would normally do on site in six or seven days had to be done in just three days on The Block to allow time for painting, decorating and styling.

“I didn’t realise how important the styling and decoration aspect is,” he says. “You could have the best structural design or layout in a room, but at the end of the day, if it doesn’t look great, you won’t be scored well.

A builder of 25 years, Mr Hogan asked Ms Eva to help him build a deck at their home as a means of practising before they began filming The Block. But it wasn’t long before he had to fire his assistant.

“She started off okay, but then she lost concentration and couldn’t listen, so she got fired,” he says.

“I have helped out on jobs with Norm before,” Ms Eva says. “When it comes to power tools, every time I touch one, my partner pounces on me… and not in a sexual way. So I’m good enough to lob the wood, but not good enough to use a drill.

“I gave it a crack [on the show], but whether it was received in a positive way, you’ll have to watch and see.”

Mr Hogan and Ms Eva have been together for six years and have two children, and because renovating their own home has been relegated to the bucket list, The Block was a great opportunity to have a go.

“Other people might think we had an advantage with Norm being a builder, but styling and design was so important. The vision is so important… and we didn’t have any,” Ms Eva says.

“Norm is a builder but I’ve never styled anything before, so you could have picked me up and plonked me on my ass and I would have been more comfortable than what I was in that environment.

“You are 100 per cent doing everything on your own with one small feedback session and then you get judged. So there was a bit of ‘I don’t think I can do this’.”

Ms Eva says they “looked like bogans” taking photos with the chauffeur who came to greet them at the airport and generally had a lot of fun with the other contestants despite the high-pressure environment.

“I would buy her a pie every day and we’d have a chat and she never really said much, but one day she put her hand on her left breast and told me my mother had cancer there and told me, ‘don’t worry, she will be fine’. Mum was [later] given the all-clear while we were filming The Block,” she says.

“Management gave me permission to give out microwave meals to the people living on the street nearby. I wanted to make sure we were respecting the people there, even if they weren’t former residents of the building. It also helped us to keep everything in perspective. Someone might have lost everything in their life, and suddenly it doesn’t matter if your bath is not the biggest. It’s not the biggest thing in the world to be worried about.”

Support our locals when The Block premieres on Sunday, August 5 at 7pm on Channel Nine.