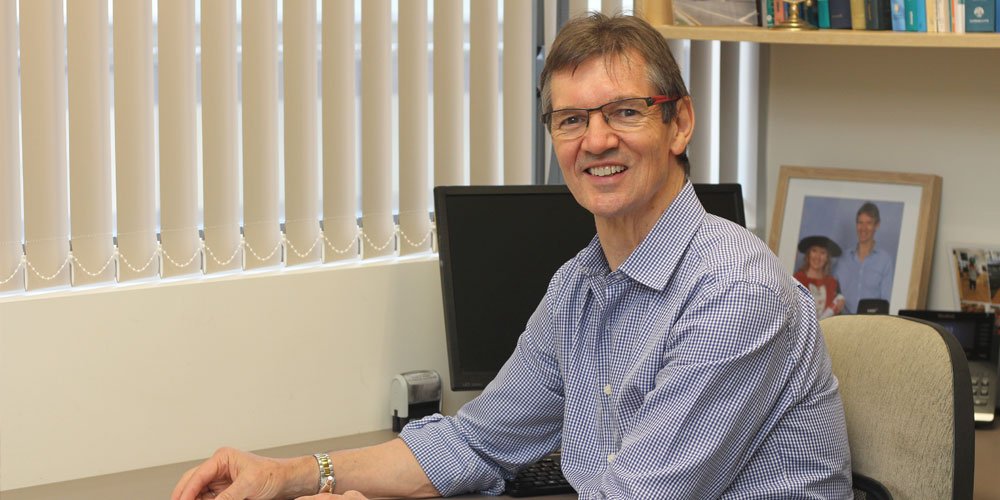 Dr James Moir is not the kind of man to throw away an unfinished patchwork quilt. His late wife Julie had been sewing a quilt when she passed away suddenly in 2008 and Dr Moir, who has delivered 5000 babies across four continents in his career as an obstetrician and gynaecologist, recently sat down at a sewing machine to finish it off himself.

It may not be what you’d expect of an esteemed doctor, but Dr Moir is a remarkable man. After 47 years practising medicine, he retired on February 11.

“My wife had a sewing machine that had broken down and I was thinking of getting a new one for doing simple jobs around the house, like hemming curtains. My daughter found out which model I had been looking at and ordered one. When I was looking through my wife’s things for a spare bit of cloth to practise on, I found this one old piece of cloth.

“I unfolded it and in there was a patchwork quilt she was three-quarters of the way through finishing. Some of the panels were still tacked down with safety pins onto the backing fabric, so I finished it off with my elementary skills.

“I can do the very basic things,” he says. “I got a bit of advice from various friends and followed the instruction book and off I went. I finished tacking down the various squares and the patterns and shapes inside those and tidied up the edges and put a nice, neat hem in and now we have a family heirloom started by my wife 15 years ago and finished by me this week.”

Along with sewing, Dr Moir plays flute with Buderim Concert Band, of which he is president, and has started piano lessons again for the first time in 50 years at the age of 70. Having learnt piano as a child, he found a local teacher to help him stretch his capabilities.

Growing up in a small village in rural Scotland, Dr Moir’s long and distinguished career began when he finished medical school in Aberdeen in 1975. His medical career took him around the world from Scotland to England, Canada, Papua New Guinea, New Zealand, Tanzania and various parts of Australia, before settling to practise on the Sunshine Coast in 1993.

After following in his father’s footsteps to become a doctor, Dr Moir felt compelled to  use his medical training to help those in the developing world and early in his career he spent time working as a medical and scientific research officer in Papua New Guinea.

“Following seven incredible years in Papua New Guinea, I knew there was a need for women’s health support which is what inspired me to pursue further studies in obstetrics and gynaecology,” he says.

Here on the Coast, Dr Moir began offering early fertility treatments in 1996 and was responsible for the IVF treatment that led to the famous Clegg triplets being born in 1999.

“They came into the office last week and I got a picture with the triplets again and their mum Christine, more than 20 years later. It was really good. I like to bump into people on the Coast I’ve helped.

“It’s a very rewarding part of the job to help couples or women get pregnant that are having problems and then they see the baby for the first time on a scan at six or seven weeks after a positive result. Through most of my career, I’ve been able to follow them through the pregnancy and deliver them myself at the end of the pregnancy.”

Another highlight of Dr Moir’s career has been visiting Tanzania with helicopter pilot Jan Becker of Becker Helicopters, a midwife who has established an NGO, Midwife Vision, to help train midwives in early baby resuscitation in Tanzania.

While Dr Moir has enjoyed a rewarding career, his greatest joy has been seeing his four children grow into wonderful adults after losing their mother.

“It’s one of the greatest rewards in my life to see my kids grow up into happy and healthy well-adjusted people who still enjoy each other’s company,” he says. “It’s been nice watching them grow up.”

And while he’ll miss his work, he feels it’s the right time to close that chapter of his life. “It’s a bit like being at a musical concert where you’re doing a performance and you want to leave with the audience wanting more,” he says. “In some ways, I think I’ve done a lot, but there are still things I might have developed an interest in if I’d had more opportunity. I’m happy I’ve done my time and I can now pull back … and enjoy some of my own interests and family.”