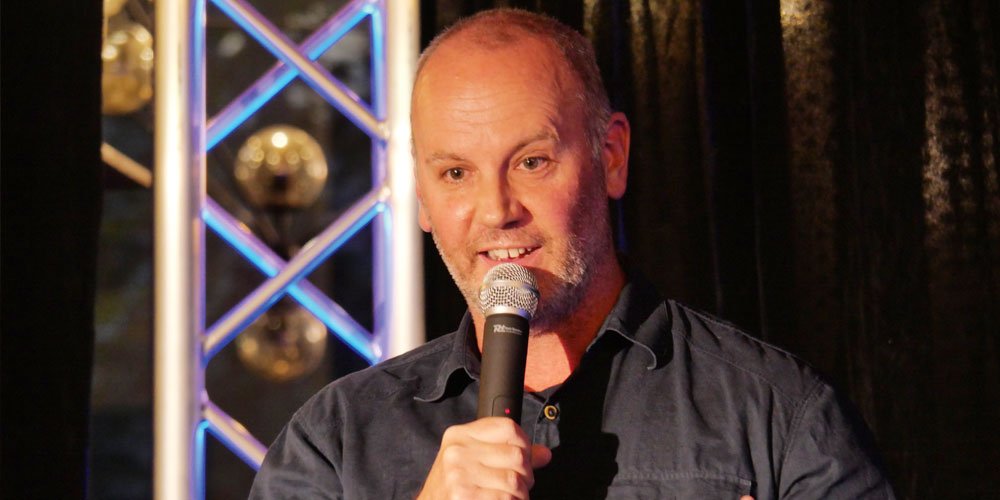 It’s not often you come across a man who has mastered both osteopathy and comedy, but then again, Christian Lutz doesn’t do things by the book.

The 47-year-old single dad is preparing to close the doors to his Bli Bli osteopath business later this month in order to take his comedy show around Australia.

Not only will it provide his children, Archie, 11, and Tori, eight, with the experience of a lifetime, but Mr Lutz says he wants to show his children how important it is to follow your dreams.

Mr Lutz has been drawn to comedy since he was a young boy. He has fond memories of trips to the Hotel Esplanade in Melbourne with his father where they’d watch comedians, who are now household names, as they were starting out.

“It always amazed me how good you feel leaving those shows, but at that stage I never thought it would be something I’d do as a profession,” he says.

“Not that everything is a laugh, but sometimes it really is the best medicine, as the pun goes, to diffuse physically or emotionally painful situations with my patients. To give people something positive and lighter to focus on, even if it is just for a couple minutes.”

Around 10 years ago while living in Perth, Mr Lutz was gifted a comedy course for his birthday. He revelled in the weekend of workshopping ideas and creating a five-minute set. But it came undone when the organiser forgot to confirm his booking for the intended performance room.

“What was supposed to be an intimate gig in front of supportive family and friends willing to pretend you are funny, turned into a 200-plus crowd of very drunk hooligans enjoying a Sunday arvo session at a nearby Irish pub,” he says.

“My voice was wavering and I looked like a penguin up there because I kept my arms tucked in so I didn’t show the sweat stains in my armpits.”

That debut gave him such a buzz, he signed up to the Australian National Comedy Competition, RAW Comedy, for up and coming comedians in 2013. The bold move paid off, with Mr Lutz making it to the WA state final, which was performed at the State Theatre in front of 2500 people.

“From then on I was hooked and started working on my craft and doing as many gigs as I could.”

The way he captures family life and relationships in a relatable yet side-splitting way through observational humour and storytelling has seen Mr Lutz recently return from sold-out shows at the Melbourne International Comedy Festival.But it wasn’t always that way.

The first time he appeared at the renowned festival, only two people turned up.

“I initially thought I’d just refund them the tickets and spare myself the embarrassment of performing. But the couple explained they had driven four hours from country Victoria into the city and had randomly chosen to come to my comedy show. Feeling bad I decided to perform anyway and it was the greatest lesson I’ve had in comedy. I learnt that you never know what people are going through and that it’s my job as a comedian to bring that energy to my performance regardless of the size of the crowd, or where you are performing,” he says.

“After the show, which luckily they loved, they told me they had not been out for 12 months since their son had passed from a motorcycle accident. They told me how grateful they were to have a laugh again. It was like the show had played a small part in their healing.”

Mr Lutz will be the star performer at a comedy fundraiser on June 5 for Sunshine Coast based charity No More Fake Smiles, which provides advocacy and therapies for children who have been sexually abused.

Mr Lutz has performed at all of the charity’s major fundraisers since he met co-founders Annie Jones and Tracey Morris several years ago.

“Although the cause is a serious one, the night is focussed on positivity and looking forward, bringing great food, great entertainment, and great company to make it a fun night and forget whatever troubles are going on,” he says.

Tickets to the comedy fundraiser are still available via nomorefakesmiles.com.au. For details about the comedy tour, head to christianlutzcomedy.com.

Continue Reading
You may also like...
Related Topics: Charity, Comedy