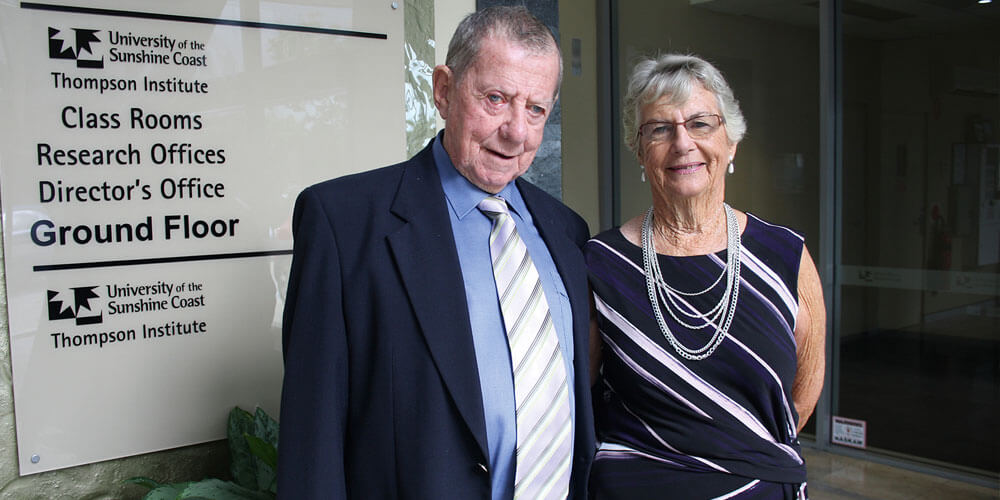 If you’ve got money, you should use it to help others. That’s the view of Maroochydore philanthropist Roy Thompson, who on Australia Day was appointed a Companion of the Order of Australia (AC) for eminent service to the community.

That’s only one notch below a knight, but this straight-talking man is not one for pomp and ceremony, saying he and his wife don’t go out much and don’t live a luxurious life.

“I was just saying to my dear wife Nola, I’ll have to call you a lady,” he jokes.

The Thompsons shy away from attention – you won’t see them swanning around the social circuit – despite their standing as two of the Sunshine Coast’s biggest philanthropists.

“We’re not social people,” Mrs Thompson says. “I’m very pleased and very proud of him, and I’m glad of the recognition, but it wasn’t ever expected.

“He’s always been very ambitious and really wanted to make it to the top. We got there, so what do we do with the money?

“We could have bought a big yacht and gone sailing around the world. We’ve had our overseas trips and now we’re just happy to sit here and look at the water.”

“We’ve been to a lot of places in the world, from Russia to Alaska,” Mr Thompson says. “I’ve owned quite a few nice things but she’s a different person – she’s very down to earth.”

Mr Thompson has always been a hard worker, starting as a builder and moving into real estate development – and he’s still at it.

“I have a reasonably big subdivision on Bribie Island that will be finished in the next fortnight or three weeks,” he says.

“Then I’ve got to think about what I’m going to do. I don’t need the money, so why work if I can retire and enjoy it a little bit?”

While they don’t live in a mansion, the multimillionaires do enjoy a 10th floor apartment in Duporth Avenue’s Riva building, which affords them panoramic views of the ocean.

At the ages of 87 and 81 respectively, Mr and Mrs Thompson reckon it’s time to slow down. They’ve raised eight children and have 16 grandchildren and 11 great-grandchildren and with six of their children still living on the Sunshine Coast, they are content with where their lives have taken them.

Mr Thompson was born in Colac and moved around regional Victoria with his family before settling in Melbourne, where he lived till he was 40. He describes his childhood as “incredibly happy” and says his parents were lovely people and average Aussie battlers who were never in the position to give away money.

“They couldn’t even give away the other sock because they didn’t have it,” he says. “They were poor. My father was the manager of a gas works and mum stayed at home.”

Mr Thompson met Nola at the Heidelberg Town Hall, one of the biggest dances in Melbourne at the time, and they hit it off immediately.

“She is a beautiful woman and we’ve been married for 61 years,” he says.

In 1970, the Thompsons moved to Redcliffe, where they raised their family. They struggled financially – Mrs Thompson stayed at home with their eight children while Mr Thompson worked.

“When I was young I had up to three jobs,” he says. “It didn’t matter what it was, as long as it paid. Nola deserves a medal for raising eight children.”

One day, Mr Thompson took a drive up north and when he drove over the hill at Buderim and saw Maroochydore below, he vowed he would live there within six months.

In 1972 he built Chifley’s Hotel in Alexandra Headland, which became the place to be for live music on the Sunshine Coast.

He sold it to Stewarts Hotels Group in 1978, moving on to buy the Mooloolaba Hotel, followed by countless more Sunshine Coast developments over the years, which cemented his fortune.

“Common sense says I can’t take it with me, so I may as well give it away. I gave my children their fair share first – I wanted to see what they would do with it and they have done exceptionally well.”

The Thompsons have been generous supporters of several Sunshine Coast organisations and they were named the Queensland Higher Education philanthropists of 2017 for their support of the University of the Sunshine Coast – to date, they’ve donated $15 million and it’s not ending there.

“I thought, I made the money here, I should spend it here,” Mr Thompson says.

“When I looked at it logically, the university was the only thing I could put money into up here. Education is a big thing for the Coast and for kids in general.”

The Thompsons’ first donations to USC in 2011 and 2012 went to 150 study support bursaries, which provide regular payments to students experiencing financial pressures to enable them to complete their degrees.

They also offered to donate half the funding for a multi-level carpark at USC with funds raised going to student scholarships and bursaries. This project has already supported 69 students and is expected to provide more than $29 million to more than 1000 students over the next 50 years.

The Thompsons love receiving letters from students who have benefitted from their generosity.

“One particular kid was kicked out of home when he was 14 or 15 and now he’s a solicitor and doing really well,” Mr Thompson says.

They also donated a $7 million building that now houses the Sunshine Coast Mind & Neuroscience Thompson Institute, a facility at the forefront of mental health research. Their most recent donation went towards purchasing an MRI machine.

The Thompsons say they’ve taken great pleasure in being able to give to the Sunshine Coast community and encourage others who are able, to give.

“It’s a fantastic feeling,” Mr Thompson says. “It would be lovely to see more people give.

“There are a lot of people that have a lot more money than they need and I think it’s up to them to start giving – let’s face it, they can’t take it with them.”