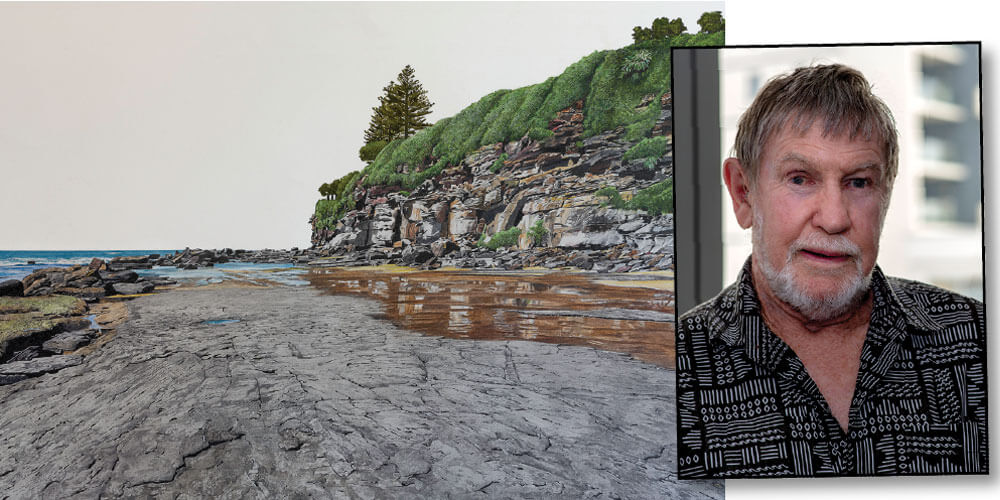 Phil Rolton’s stunning photorealistic landscapes and seascapes have brought him into the spotlight in recent years, but the 80-year-old Sunshine Coast artist has been a stalwart of the local art scene for decades, working as a founding member of the committee that got the Caloundra Regional Gallery off the ground.

Born in Sydney, he studied fine art in Sydney and Melbourne. Drawn to art from an early age, his first job was in printing, working for Woman’s Day and Women’s Weekly magazines, back before everything went digital.

“Art wasn’t a thing you did then,” he says. “It was just a hobby. That’s why I got my job in printing. I was in the process side of printing, making the films and retouching the colours before they finish up on the cylinders. There was only yellow, red, blue and black.

“It was very meticulous and technical, using brushes to get the right balance.”

Mr Rolton settled with his wife Robyn and their two children in Caloundra in 1972 and he became a nurseryman for Caloundra City Council for 23 years while actively working to establish the local art scene.

After many years in Caloundra, Mr and Mrs Rolton felt like a change. Three years ago they moved to Noosa, where Mr Rolton has exhibited and won a number of people’s choice awards in local prizes.

Conveniently, Mrs Rolton is a photographer who is able to capture any landscape that takes his fancy, which he then uses to create his unique artworks.

Mr Rolton has won a number of awards, including the 2017 open award at Gympie’s Rush Art Competition for his depiction of Double Island Point, which was purchased by Gympie City Council.

He was a finalist in the Sunshine Coast Art Prize in 2014 and has been a finalist every year in the Local Artists – Local Content Art Prize, an exhibition that has been running at the Caloundra Regional Gallery for five years.

“The depth of talent is amazing,” says Mr Rolton. “It just keeps getting better every year. It attracts a large diversity of artists.”

Mr Rolton missed out on a major prize this year but he’s still in the running for the people’s choice award, which will be announced after the exhibition closes on December 9.

After years of working with oil paints and acrylics, Mr Rolton feels he’s found the perfect medium – watercolour and paper – and his entry for this year’s prize, a painting of Moffat Beach, is a fine example.

“I gave oils away early, I didn’t like them, they don’t dry quick enough,” he says.

“The last five years I’ve been doing photorealism with watercolour and paper. It’s a bit harder, when you put your paint down you can’t fiddle around and take it off again. I like the direct light – it’s got a light in it that’s nice to work with. It takes a bit of practice. I don’t know if I’ll be doing it for the rest of my life but I’m happy doing it for now.”

A boost for local artists

The fifth annual Local Artists – Local Content Art Prize exhibition opened at the Caloundra Regional Gallery on October 17 with Buderim artist Jan Strudwick announced as the $5000 Best of Show winner for her mixed-media work Standoff at Maleny. The exhibition gives local artists an opportunity to showcase their work and share in $13,500 of prizes across six categories. Arts portfolio councillor Rick Baberowski says, “A wander through the exhibition is a great opportunity to see the variety of high-quality art being created right here on the Sunshine Coast and, if you’re quick enough, an opportunity to purchase one of the finalist works for yourself.” The exhibition will run until December 9.