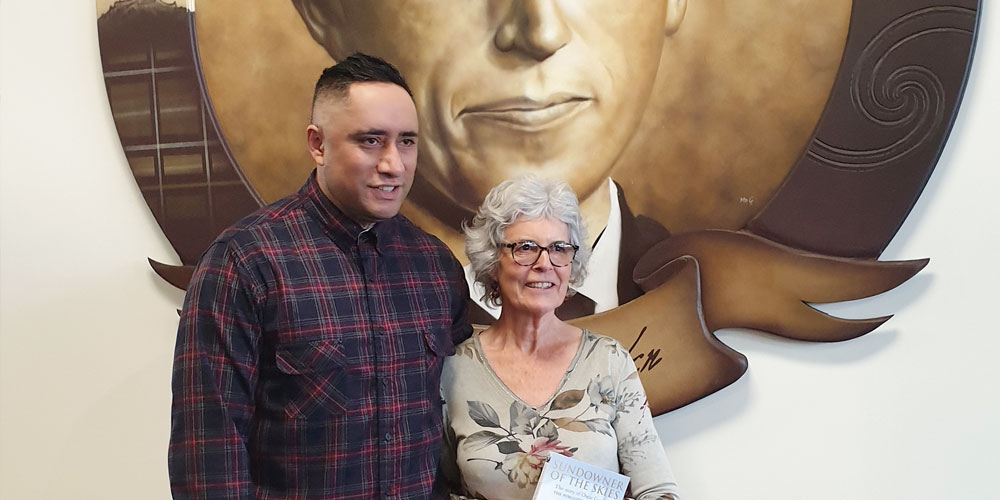 Maleny author Mary Garden says the moment a mural of her father was unveiled at a New Zealand airport late last month was one of the most emotional experiences of her life.

Ms Garden recently published a biography of her father, the late Oscar Garden, who completed an extraordinary 18-day flight from England to Australia in a second-hand plane in 1930 with only 39 hours of flying experience.

At just 27 years of age, Oscar Garden was the youngest and most inexperienced pilot to attempt the flight. He did so sitting in an open cockpit with no navigation aids other than a compass and hand-drawn maps.

His feat was as newsworthy as those of Charles Kingsford Smith, Bert Hinkler and Amy Johnson, yet while those aviators went into the history books, Mr Garden’s legacy was lost. That was until Ms Garden decided to set the records straight.

Titled Sundowner of the Skies – The story of Oscar Garden The Forgotten Aviator, the book tells the story not only of Mr Garden’s daring flight, but also Ms Garden’s unique insight into the kind of man her father was.

As a father and a husband, he was cold and unloving, a strange, solitary man who, after a distinguished flying career, retired to grow tomatoes in Tauranga, New Zealand.

After receiving a copy of the book, a friend of the family made contact with renowned Maori artist Graeme Hoete, known as Mr G, as she felt he’d be the perfect person to paint a mural of Oscar.

As luck would have it, Mr G had previously been approached by Tauranga Airport in New Zealand to create a mural and had trouble thinking of a subject to paint. But when he read the book and learned the story of Ms Garden’s father, he knew he had his subject.

Local dignitaries including the mayor of Tauranga were present for the unveiling of the mural.

“I was in tears,” Ms Garden tells My Weekly Preview. “They did a Maori blessing and a song and the mayor got up to do a speech and was talking in Maori too.

“Maoris were very much a part of my childhood. At school we learnt Maori songs, I hung out with Maoris at the beach and my father had a lot of affection for Maoris.”

He didn’t, however, have a lot of affection for his children. But despite this, Ms Garden was driven to bring her father’s story to the world and right a perceived wrong.

“I’m really proud of what he did and I feel a huge compassion for how damaged he was, and that he didn’t know how to heal it,” she says.

“My childhood was really cold and he was really cruel and I didn’t feel like I had a home, but I don’t have any anger about how my father treated me.

“I did have some resentment towards my father when I started the book, but then I realised he was a product of his traumatic childhood. He was absolutely frozen emotionally.

“But even though I was ambiguous, I always felt this sense of injustice, that he deserved to be honoured and acknowledged and he hadn’t been.

“He was up there with Kingsford-Smith and Jean Batten and he’d been forgotten.

“In his last few years he was so bitter he’d been forgotten and wished he hadn’t cut himself off. That’s what moved me to write the book and I thought, if Oscar is watching the unveiling of his mural, he’d be so chuffed.” 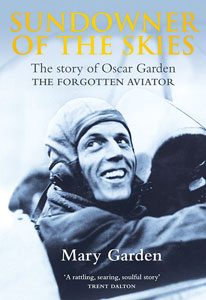 Sundowner of the Skies – The Story of Oscar Garden The Forgotten Aviator is published by New Holland Publishers. Visit marygarden.com.au to find out more or to buy the book.

The real deal
Reaching out