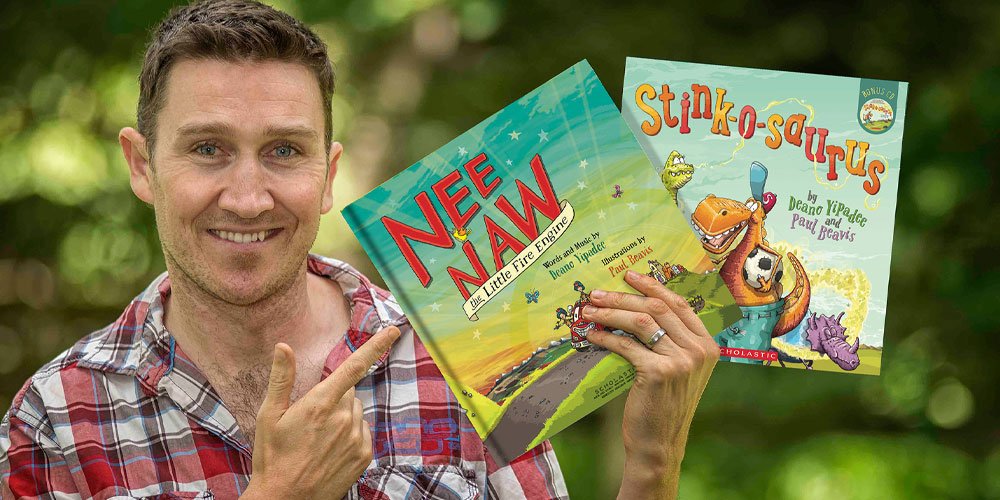 Author Deano Yipadee will take part in the literary festival

So, who has the temerity to call themselves by the quizzical name of Deano Yipadee and claim to give you tips on writing a ‘Best Smeller’? Who would laugh with a fellow with the somewhat ordinary name of Chris Collin, about the very extraordinary topic of The Things You Can Do With Blue Whale Poo?

The answer is, some very successful and popular authors who have let go of conventional perspectives and embraced the wild and imaginative. The creative folk who dive deep into their minds to find adventures, fantasy and fun and form into children’s and young adult literature. It’s the stuff that young people or, in fact, any age group (who have not released their inner child) find thoroughly entertaining.

This week is a special week for all those people, because despite the limitations of COVID, the literary festival Voices on the Coast is going ahead and, similar to many other events, is being served up via an online stage by Immanuel Lutheran College in Buderim and the University of the Sunshine Coast.

It’s now 25 years since the award-winning festival began its program of bringing together some of Australia’s finest established and emerging young adult writers and performers for young people to engage in workshops, book talks, storytelling, poetry and drama. More than 240 individual presenters and 18 groups have participated since the festival’s inception with half of them Queensland born or based and the other half from interstate.

Kelly Dunham co-ordinates Immanuel Lutheran College’s Innovation Hub (this is what we older readers formerly called the school library) and has undertaken the role of  Voices on the Coast co-ordinator since 2009. She says the aim of the festival is to inspire young people to enjoy the world of reading, writing, drawing and performing through their experiences each year. A special part of her role is author selection.

“It’s quite a task,” she says. “Choosing authors is a juggling act.”

A major goal of the selection process is to be as inclusive as possible.

“We choose authors for young and older children, male and female, the voracious and reluctant reader,” she says.

She believes much of the festival’s success lies in its program format that allows children direct engagement with the authors. This year’s online event will also include Q&A’s with students and other interactive events.

Additionally, she enthusiastically notes that in terms of books sales for children and young adults, Australia is leading the world.

“It’s booming,” she says. “It used to be said that when electronic books came out no one would want to read print. However, the choice goes for print.”

Her personal reward for contributing to the festival’s creation is simple.

“What always gets me thrilled is to see the children’s faces when they engage with authors.”

However, the practical results are more far-reaching. According to some parents, this is what it takes to ignite an interest in reading: “I’ve heard parents say their children didn’t really like reading, but after attending Voices on the Coast, they’ve found a favourite author and they’re reading their books.

“It’s heartening to see how many students are engaging with reading and the festival,” Ms Dunham says with a smile.

Of course, in 2021 COVID is not the only competition for the printed word. Social media, games and phones are hot competitors in the daily schedule.

However, in her daily life, Ms Dunham sees many dedicated young book readers.

This week, Year 12 Immanuel Lutheran College student Abbey Williams, who has attended the festival since Year four, is enjoying her final opportunity of attending workshops and author lectures as a student. Though it won’t be the same this year, Abbey says over the years, she has particularly enjoyed the interaction with other school students who have attended the festival.

She has also enjoyed meeting her favourite author Lynette Noni and finds a connection with the writing styles of young adult authors.

“I like the way they draw their inspiration from real world experiences,” she says.

Abbey is looking at furthering her education in health science fields, but as she says, “You always need writing.”

Blake Darlison is another Immanuel Year 12 student who has a long history with the festival.

“I have been attending since Year six,” Blake says. “I’ve been a visitor’s guide and volunteered with the introduction of authors.”

Although sport plays a major part in his life, Blake still finds the time to read and usually borrows books from the library.

“Morris Gleitzman is my favourite and I like Peter Carnavas.

“And I’ve just read the Cherub series [by Robert Muchamore].

The Immanuel Lutheran College Innovation Hub is home to thousands of learning resources including various platforms and books, including online portals, journals and databases.

Yet as Ms Dunham says, “Literature and reading is the basis of everything – no matter what platform or source. And reading is never boring.”

Voices on the Coast offers a unique cultural experience to regional youth and the festival has become a much-anticipated event for students from years four to 12 (aged nine to 18 years) along the Sunshine Coast and from the adjacent inland areas.

This hilarious high-energy session looks at the ins and outs of writing chart-topping stories. Covering idea generation right through to promoting and getting people engaged with the book.

Award-winning Chris Collin’s exciting new book isThe Things You Can Do With Blue Whale Poo. This ridiculously funny (and particularly stinky) rhyming book celebrates a little-known fact – the importance of blue whales, in particular, their poop! Chris considers his role is to bring fun (and funkiness!) to the world through his books and highly engaging presentations, designed to encourage readers of all ages to read for the joy of reading.

Sunshine Coast young adult book author Lynette Noni (pictured) is part of Voices on the Coast line-up. She has participated a few times before and not only does she love talking about her award-winning books at the festival, but as a past student of Mountain Creek State High School, she also gets a kick out of meeting students from her old school.

It’s certainly encouraging for students to see the award-winning career path Ms Noni has carved through the creation of her novels, especially since she is currently Australia’s number one YA fiction seller and many of the students at the festivals have read her novels. Having a face-to-face meeting with her has a special relevance for students.“You’re really human,” is one of the responses students have greeted her with.

In her early years, Ms Noni says becoming a YA author was never a career goal. “I studied journalism, academic writing and human behaviour at university,” she says.

Moreover, she wasn’t a particularly obsessed reader, rather it was the desire to “write the book that I wanted to read” that underpinned the start
of her writing. Her five-book series The Medoran Chronicles commenced in 2015 and set the tone for her fantasy adventures past and future. The success of these books has meant an ongoing demand for further novels and to satisfy her young readers, Ms Noni has become a prolific writer. This year, fans will be pleased to know she has not one, but two books being released. The Prison Healer is coming out in April in Australia and The Gilded Cage is expected to be out in October.