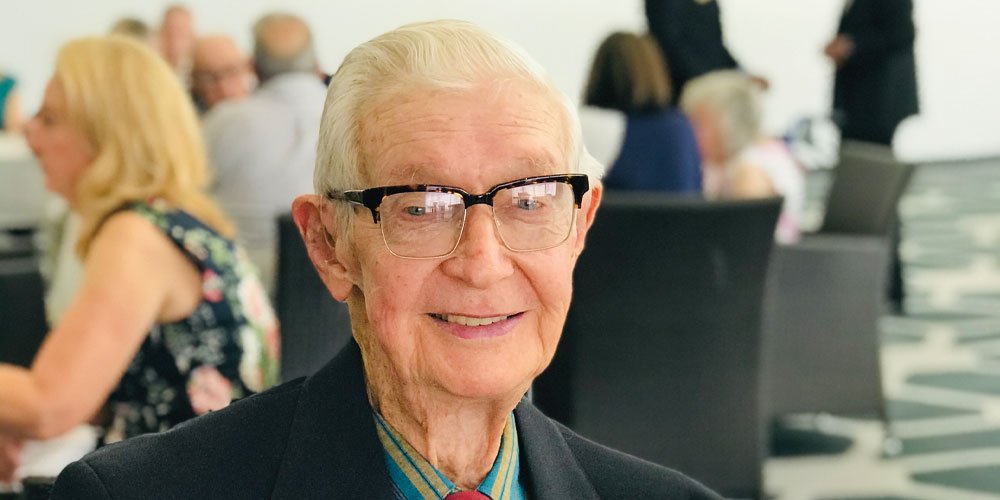 Like many young Australian men, Neville Chadwick was only 18 when he enlisted in the RAAF on June 22, 1942 to “do his bit” for the war effort. His father had served in artillery in WWI and Mr Chadwick was determined to serve his country too, taking on the role of an Air Force radar mechanic.

“I joined up straight after school in 1942 and by the time I finished training it was the end of ’43 or the beginning of ’44. We did the initial training in Maryborough, being taught the marching and all that sort of thing.

“Then I was sent to the tech [technical college] in Sydney where they trained you and you decided what you wanted to do. I decided I wanted to be an electrician and got sent down to Melbourne tech. From there I went to Sydney and was trained as a wireless assistant and when I finished that, I was posted to Cootamundra to the Air Observer’s School. They were training on Avro Ansons.”

Mr Chadwick was posted to the 13th Squadron and sent to Kiriwina in the Trobriand Islands of Papua New Guinea.

“What I had to look after was what they call IFF – identification friend or foe. When the plane was flying around, we could tell from the ground radar whether it
was a friendly plane or an enemy plane.

“When I got to the squadron, all the sets were unserviceable. To fix them up, we used to take them out, open them up and stick them out in the sun. With all the moisture up there, it used to play havoc with them, but sticking them in the sun dried them out and at the time, that repaired it.”

It was the first time Mr Chadwick had left Australia and he says it took some time to get used to living with older men.

“We were doing ground support for General Krueger and I’ll always remember, the planes had a cover around the engine that faced forwards and they used to come back from patrol with bits of coconut palms caught up in them. One pilot came back with a dead monkey stuck on it – that’s how low they were flying.”

Mr Chadwick was involved in a number of air raids and says there were a few times he feared for his life.

“When I was on the island of Noemfoor, we were camped right on the edge of the air strip. On my first night there, I went to bed on my stretcher and there was an air raid warning. I was with an old person who had been in for quite a while. I said, ‘Where do we go to get into the trench, just in case?’ He said, ‘Go back to sleep.’ He went back to sleep and I sort of just lay there, wondering. But nothing happened. It wasn’t too bright, because a few bombs were dropped there.

“From Noemfoor, we went to Morotai, up near the Philippines. That was a big island with three air bases there and all types of aircraft, mainly American. We had air raids there too.

“The day after all our aircraft arrived, the Japs [sic] had come across and bombed the air strip and we didn’t have any serviceable aircraft. It was mostly superficial damage that had to be fixed up. From there, the squadron was split up – half went to the Philippines and the other half went to Tarakan, on the east coast of Borneo.

“We were under Australian control there and that was the biggest letdown of anything. We’d been under American control for months and were issued with packs containing chewing gum, shaving creams, lots of little things you needed.

“Under the Australians we got nothing. The Americans, as soon as they landed in a place and got it more or less cleared, they would do things like put on outdoor movies. We never had anything like that on Tarakan. I was there until just before the Japanese capitulated.”

Now 97 and living in Buderim with his wife, Mr Chadwick says he doesn’t think about the war much anymore, but will occasionally go through a few old photos.

“It was an experience and we were lucky we were never in any serious action,” he says. “All we had to do was put up with the occasional air raid, which was nearly always at night. They weren’t too accurate with their bombing, fortunately.”

Mr Chadwick played bowls for many years but age has forced him to give it up, so he spends most of his time at home, reading. “I used to do quite a bit on the computer, but all these newfangled things are getting a bit beyond me. Each time I turn the computer on, it’s updated to something new and I can’t follow it.

“We don’t have mobile phones or iPads or any of that. I’m not happy with the way everything is going. Some of the banks have closed their branches on Buderim. You can complain, but it doesn’t do any good.”

Mr Chadwick has lived on the Sunshine Coast for 40 years and always participates in the Buderim Anzac Day street march, which this year will be held at Buderim’s state school. He finds it too difficult to walk the distance, so he takes part on his scooter.

“The Friends of Buderim put on a morning tea for everyone at the school and you can get yourself a cup of coffee and a bit to eat, talk to some people that perhaps you haven’t seen for a while.”

While he’s a member of Maroochy RSL, Mr Chadwick doesn’t attend any events for veterans, as he doesn’t have transport and would have to pay for a taxi. When asked if he’s proud of his military service, he responds with a humble, “I suppose so”.

Still, he believes Anzac Day remains an important event on the Australian calendar and one he’ll continue to participate in as long as he is able.

“The bulk of the people watching the march are the younger ones,” he says. “All the kids are there. It’s always well crowded.”

Continue Reading
You may also like...
Related Topics: WWII

James Reyne & Boom Crash Opera at NightQuarter
Hitting it off