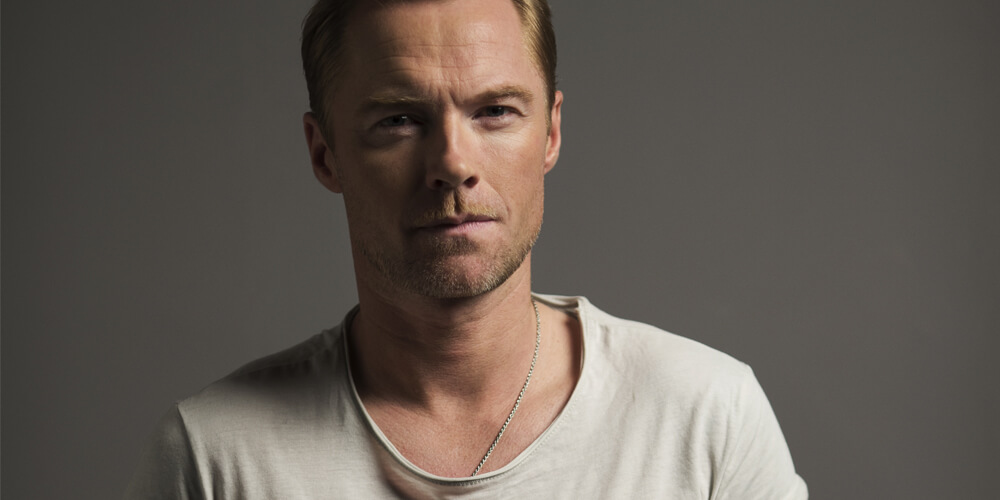 Life is a rollercoaster for Ronan Keating, who is gearing up to be one of the headliners for the Caloundra Music Festival this month.

But the Irish musician, who shot to fame in 1994 as the lead singer of Boyzone, says he wouldn’t change a thing.

The 40-year-old has sold more than 25 million records worldwide as a member of Boyzone, and a further 20 million as a solo artist since 1999.

He continues to tour around the world, has an established film and television career, is about to embark on a career in British radio, and just welcomed son Cooper into the world with new wife Storm.

“He’s brilliant. He’s a little legend and is sleeping really well. He’s full of smiles. Just brilliant,” Keating gushes when he speaks to My Weekly Preview while on route to a London studio.

“His brothers and sisters absolutely love him and Storm’s been wonderful.”

Keating tied the knot with Storm Uechtritz, a Queenslander born in Childers, in August 2015.

The couple met on the set of The X Factor, where Keating featured as a judge for five seasons and Uechtritz was one of the show’s producers.

Keating was the winning mentor on the show twice, with Altiyan Childs in his inaugural year in 2010, and in 2014 with Marlisa Punzalan.

Keating then moved on to become a coach on The Voice in 2016 and says while he doesn’t “miss the shows overly,” he enjoyed “six fantastic years” in the roles.

“What I miss is being in Australia. The culture, the way of life, the people, and the places.

“I would live there in the morning if it wasn’t so far away from my kids, who live in Ireland.

“Hands down, I’d live there in the morning and Storm agrees with that totally,” he says.

With his new mother-in-law living on the Sunshine Coast, Keating says they have enjoyed a couple of family holidays in the region with Jack, Missy and Ali, his children with former wife Yvonne Connolly.

“We just rented a house on the beach and it was just incredible,” he says.

“We’ve been a couple of times now and we will get some great time again in Australia soon.

“There’s going to be a big family get-together and I’ll be able to sing a few tunes.”

Keating is talking about his appearance at the 2017 Caloundra Music Festival, where he is set to headline on the Soul Stage on October 1.

“I’m very excited about [the set]. I’ll be bringing out the hits from the past 25 years. Everything from When You Say Nothing At All and Life is a Rollercoaster.

“There’ll be something new and something old and I’ll have my band with me.

“Summer festivals, for me, are a high point of the year and I’m looking forward to playing on the Sunshine Coast.”

A regular on the European summer festival circuit, Keating recently played in Norway, Zurich, Munich and Berlin, and has also been in rehearsals with his former Boyzone bandmates with a reunion tour of the UK on the cards for later this year.

Keating made his musical debut with the band in 1994 alongside Keith Duffy, Michael Graham, Shane Lynch, and Stephen Gately. Gately passed away in October 2009, but the remaining foursome continues the legacy.

They are set to release a Boyzone album later this year, followed by a tour kicking off in 2018.

“It’s like nothing’s changed with the boys,” Keating says.

“It’s like catching up with an old school friend; you just slip back into that world, that sense of humour, that bubble. It’s a great feeling.”

While juggling Boyzone rehearsals with spending time at home with his newborn son, Keating is also preparing to become a new Magic Radio weekday breakfast show co-host, a gig he says makes him “slightly nervous”.

“The repetition of being in the same place for a long time, for five days a week, is nothing like anything I have ever done in my career.

“I am always moving around constantly. But being home every afternoon to see my newborn fella will be wonderful,” he says.

“There will be a couple of trips for different gigs on the weekends, but Monday to Friday will be quite calm for me, which is a whole new feeling and I’m quite excited about that.”

When asked if he’ll be giving the new Boyzone tracks a spin or two while in the hot seat, Keating replies with an emphatic “hell yeah!”.

“Radio’s a very strong, powerful medium. It’s probably the strongest in the UK because people aren’t watching TV anymore. They are all on Netflix or other streaming services,” he says.

“For me, obviously radio has been the strongest medium throughout my career. It’s a strong position to be in as a musician.

“I love songs, I love music, and I love playing songs for people. When I have guests around, I am always trying to introduce them to new songs so it’s a passion of mine.”

Keating has dabbled in films and television shows, most recently starring in the Jersey-based film Another Mother’s Son, and the fourth season of Australian drama Love Child.

While he is already working on another secret film project, Keating says his heart will always be in music, which he describes as his “heart and soul”.

“I love to sit down every evening and play the guitar and write songs. Film and television interest me greatly, but they are not the be all and end all.

“I am passionate about music and will pursue that constantly.”