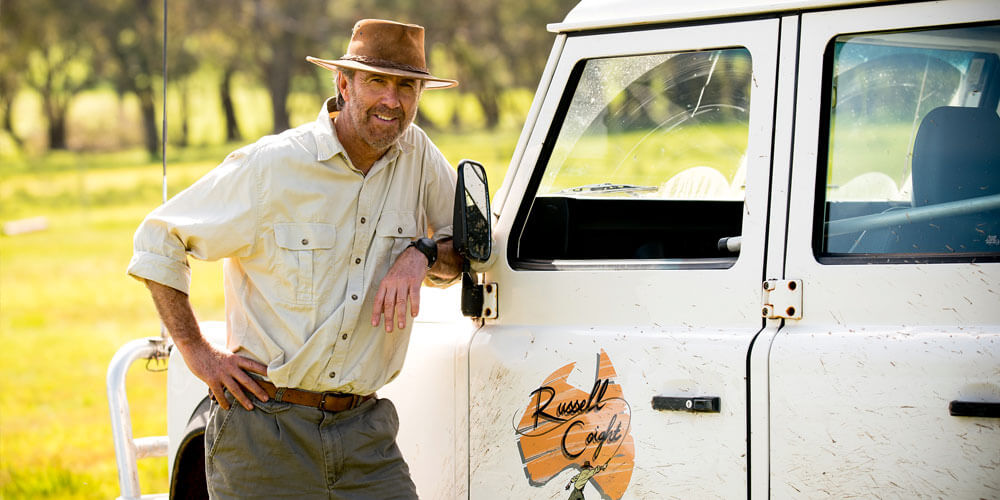 It has been close to two decades since an Australian bush legend hit our television screens.

Long before the charm of Bear Grylls or the swagger of Steve Backshall, intrepid traveller Russell Coight was showing us how it was done.

Sporting khaki shorts, one-of-a-kind dance moves and a challenged sense of direction, he became a household name off the back of his television hit, All Aussie Adventures. Sadly, the series came to a screeching halt after a court order prohibited Russell from coming within 500 metres of any marsupial – or so we’re told.

But now, he is back – bigger, better and funnier than ever for a seven-episode season three.

What have you been up to since we last saw you on our television screens?
My wildlife park in Darwin keeps me pretty busy, especially now that the RSPCA have lifted their ban. Although our crocodile petting zoo is not going quite well – we’re having a few teething problems. I’ve also been busy working on other ideas for a new television series. Inspired by the ‘slow TV’ movement, I strapped a camera to the bull bar of my 4WD and crossed the Nullarbor. Seventeen hours and 123 separate road-kills captured in full high definition. Still waiting to hear back from SBS.

Tell us about the new show. What can we expect?
The new show will take me all over Australia (apart from certain national parks that I am legally prohibited from coming within 200 kilometres of). As with the earlier series, viewers will get to see everything: from the time I head bush and set up camp to the moment when I am air-lifted to safety by the Royal Flying Doctors.

I hear that this season will have a strong focus on cooking. Do you have any cooking tips for our readers?
You’ve done your research! This new series will feature more camp cooking, with some pretty special recipes – wait until you see my croquembouche damper. We’ll also be having a mystery box. Each week viewers have to guess what marsupial I’m cooking with. As for tips, here’s one I recently learned. When the recipe says “a tablespoon of oil” it apparently doesn’t mean engine oil.

Will we be seeing some of your legendary dance moves?
I like to think I can still bust a few moves. I know for a fact I can also bust a few tendons, so we might have to pull back a little. But yes – I’ll be getting down on the red dirt floor.

You have a terrific bush fashion sense. Where do you get your fashion inspiration from, and where do you shop for those shorts?
I have pretty simple tastes in clothes. Khaki shirt and shorts, canvas underwear. All my gear comes from an exclusive French label. I think it’s called Disposale Aussi – or something like that.

Is it true that a petition to get your show back on the air garnered 4000 signatures? What do you think this says about your popularity? Perhaps we’ll see you up for the next Australian election?
To be honest, I have been overwhelmed with the support I have received. Not a day goes by that someone doesn’t come up to me in the street, wanting an autograph or a selfie or to deliver a summons. But would I consider a stint in politics? Probably not again. My brief time as a candidate for the Hunters, Fishers, Four Wheel Drivers and Boot Scooters Party was more than enough. I’m still dealing with accusations of travel expense rorts.

Have you ever had the opportunity to visit the Sunshine Coast, and when?
Not too long ago I was visiting Noosa National Park and I was lucky enough to discover an extremely rare species of ground parrot. Scientists didn’t even know this creature existed until I drove over one. It’s now named after me. Coightus Extinctus.

Where is your favourite place in Australia and why?
Anywhere that I can get away from it all. No people, no fences, no WiFi. Thanks to the NBN that last one is getting easier to find.

Sunshine Coast residents are known to enjoy the odd spot of camping. What are your three top tips to get through a bush weekend?
If you want camping tips can I suggest you pick up a copy of my best-selling guidebook, Coight’s Camping Compendium. You’ll find hundreds of handy hints for heading bush. It’s also edible (in an emergency situation) and – if nature calls – the last 20 pages are printed on soft double-ply paper.

How much water does a human need to survive in the desert?
There’s a very simple formula. It’s y = x(n³-q) where y is the number of litres, x represents the outside temperature, n is your body mass index and q is the type of water (sparkling or still). Of course, in the northern hemisphere it’s the other way round. Does that help?

The Sunshine Coast is known for its beaches, its summer, shopping and style. What are your survival tips for local residents navigating these ‘treacherous’ city conditions?
You’ll definitely need a 4WD if you plan on tackling Hastings Street, Noosa during school holidays. As for getting a reservation at any decent Coast restaurant I would be taking a full survival kit (emergency rations, flares, first aid kit).

What inspirational piece of advice would you like to pass on to your fans?
I’m often reminded of the words my father, Russell Coight Senior, said just before he died. “Are you sure the safety catch is on?” I’ve never forgotten it.

Please tell us when season three will be airing.
Channel Ten told me “very soon”. Mind you, that’s what they said about a decision on my proposal for a bush endurance series, Outback Ninja, and I’m still waiting to hear back.

Will there be a season four, five, six? (We hope so!)
Let’s see how the fans feel about this series shall we? Wouldn’t want to get ahead of myself. Last time that happened I was run over by my own 4WD.