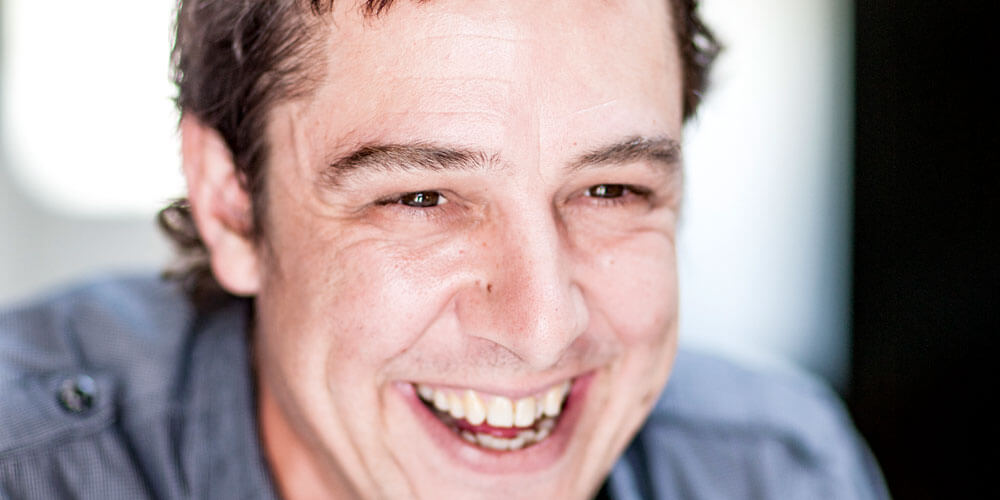 There are a few select people who leave an imprint in your mind, a resounding message in your heart that becomes a valuable life lesson.

And, when that person is Samuel Johnson, it’s pretty special. His brutal, raw honesty lingers long after you say goodbye and it becomes apparent that there is far more to this man than a talent that, in 2017, secured him a Gold Logie.

The actor, who has won hearts around the nation for his work on The Secret Life of Us and for his portrayal as music icon Molly Meldrum, has retired from his career to focus on a vital medical campaign,which could change the face of cancer research, in the name of his sister Connie who lost her battle with breast cancer in September 2017.

Mr Johnson is working alongside researchers, private enterprise and the public to establish Australia’s first metastatic tissue bank, or as he likes to call it, “Connie’s unsellable legacy”.

“It requires getting live tissue cells. Basically it means as soon as you die, you’re zipped up and sped away to get samples taken. It’s a warm bodies program, which is impossible to sell in Australia,’’ he tells My Weekly Preview.

“Connie was the first sample in our tissue bank. The more samples we get, the more we place ourselves at the front of the metastatic research.

“The organ donation rates (in Australia) are about 30 per cent. Typically what we do with our bodies is very sensitive. I’m looking to break that down completely this year. I’m just working out how to do that.

“We need to approach this nationally and have this difficult conversation about what we do with ourselves.

“This will help Australia become a world leader in otherwise dark research. It’s an under-explored area. It’s very exciting. This presents a real chance for us as a country to move to the front of the pack in a particular discipline.”

Mr Johnson’s personality will undoubtedly aid him on this journey.

He is gritty, emotive and a straight shooter, perhaps a trait developed from a life plagued by personal tragedy and former substance abuse. He is also smart, incredibly passionate and is not afraid to call it how he sees it.

He’s a self-confessed sexist: “women are by far the most superior gender”.

And, in a refreshing approach, he is also unafraid to speak of grief, something he knows plenty about. Through the years, three key women in Mr Johnson’s world committed suicide, including his mother.

“I think we’ve got a weird approach in this country. A culture of denial,’’ he says of grief.

“There is such a focus on youth and vitality and then we’re quietly wheeled on into the nursing homes.

“Look, for me, I don’t see death as the end. You know, I carry all of my lost loved ones with me. It’s my honour to try and uphold those best features. I don’t’ know who I am, I’ve based myself on my loved ones.

“I see being able to see people off as a privilege. Selfishly, I feel lucky it wasn’t me that time. Life is a little bit like a reality TV show, any moment you can get evicted.”

Ms Johnson’s cancer journey and death changed Mr Johnson’s life in more ways than one. Following her terminal diagnosis, he beat his reliance on alcohol, jumped on a unicycle and rode around the country to raise money and remind every young mum about the importance of being breast aware.

Under the Love Your Sister banner – a charity set up by the siblings – Mr Johnson is hoping to raise $10 million for cancer research. The figure currently sits at more than $7 million.

“Well my sister had a fundraising triumph last year before she died,’’ he laughs.

“She managed to get Aussies to part with 50 million 5 cent coins [for the Big Heart project]. No pressure. Without Connie and without being able to come off the back of the Gold Logie, it’s tough to replicate it.”

But, he’s giving it a go with the Big Balls project in the works.

“We’re going to break the world record for the most amount of balls in a ball pit.

“There’s an existing world record – one million. We are doing it in a love heart just like Connie’s Big Heart project. But when you turn that love heart upside down it’s also a ball sack… we’re doing it to promote men’s cancers. Love Your Sister loves all cancers.”

If there is one thing Ms Johnson’s death has taught her brother it’s to live life in the moment.

“It gave me this lust for life and a thrust to save every little particle through her savage loss,’’ he says.

“I have gained indefinitely. I honestly feel like there was fake life before Connie got sick, real life after, and the price of her death was the lesson.

“The tears. I’d done the rivers of tears well in advance. Science gave me long enough to deal with it before.

“I can be bouncing along having a great old day and something will trigger me, something Connie would have loved. I go to call her and I have that moment, that beautiful moment of grief where the treasure comes back.

“We’ve got to stop trying to control our feelings. You don’t control grief, grief controls you. If you go with it, it can be a glorious experience.

“I’ve had a lot of juicy dramatic deaths in my life. I’m as passionate about the notion of death as I am about cancer. Connie’s unsellable legacy is exciting for me because cancer and death I’m completely unafraid to talk about.

“Look, we know the conversations happen privately. Privately we think a lot about death. Why’s it a bad thing to talk about?

“If selling Connie’s unsellable legacy means I have to bust down doors, [I will].”

Mr Johnson has faith that the message will be taken up by the Australian public.

“I’ve met over 100 thousand patients… it’s never safe to generalise but they are a f*cking plucky bunch.

“It’s seen as the impossible sell and I don’t accept that. It’s a warm bodies program, make no mistake about it.

“There are a thousand euphemisms that could make it more pleasant. I’m not going to sugarcoat it. I’m putting it on the table… cancer kills families. Let’s not dance around it.”

In addition with getting the public on board, Mr Johnson needs to find the right team to roll out the program.

“Obviously I’m talking to the best, but unfortunately I can’t download Connie’s medical and scientific brain and insert it into my brain, which is tough. I’m doggy paddling around the research community and I’m on an accelerated study tour and I’m being mentored by some great game changers like Andrew Denton.

“Obviously he’s the benchmark when it comes to effective change.

“At the end of the day I can afford to fund this program initially, but I’m going to need help.

“The public has done their part. I’ll let them know when it comes time to talk to any terminal loved ones. The Australian public has already seed funded this thing.

“There is nothing more from the public we need other than compassion and their ear. I’m not really actively going for the wallet, I want the ear.”

And while he may not be a woman, he reckons he relates pretty well to the fairer sex. Laughing, he admits there is some awkwardness to be a man speaking at an event promoting women’s equality.

“I’ve got a vagina metaphorically. I’m definitely one of the girls. I’m that guy heading out with the girls while the blokes hang out showering together after playing sport,’’ he says lightly.

“I’m always busy around International Women’s Day so I must be doing something right. At the end of the day, I’m fully informed by women. I’ve only had one male role model.

“My theatre company ran with the only Australian female director policy. I don’t understand why we are not valuing our women more.

“I don’t’ want to use this word but I can’t help it, I’ll probably piss off a bunch of  feminists, but women are sacred. For me they are where it’s at.

“The last six years, I’ve spent all my time with mums all around the country, standing there as one of the mums even though I’m a bloke with no kids.

“It’s the women who have informed my success. All my agents are women. I’m sexist. I’ve just got to accept that.”

Until now, Mr Johnson has not spoken on the record in regards to the most recent gender equality issues or about the Me Too movement, which aims to demonstrate the widespread prevalence of sexual assault and harassment in the workplace.

However, he is set to talk more on the issue in coming months.

For now he says he is more concerned with the issue than the “blame game”.

“The women I’ve been speaking to are saying that we are all responsible for this, it’s a culture created by two genders.

For more on International Women’s Day events on the Sunshine Coast, turn to our cover story on page 10.