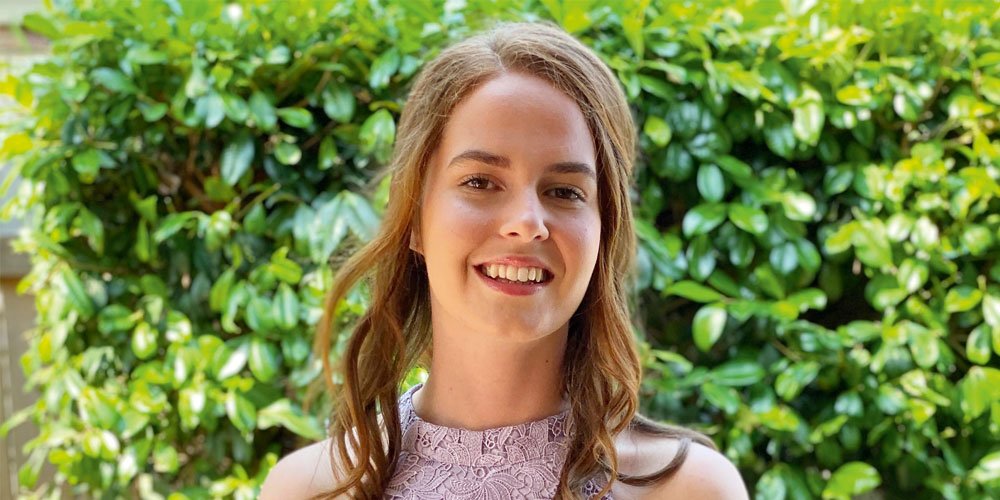 What is Cerebral Palsy?

Cerebral palsy is the result of a combination of events either before, during or after birth that can lead to an injury in a baby’s brain. There is no single cause. For most babies, the cause remains unknown. Researchers now know that only a small percentage of cases of cerebral palsy are due to complications at birth (e.g. asphyxia or lack of oxygen). Today, it is accepted that cerebral palsy usually arises from a series of causal pathways, i.e. a sequence of events that when combined can cause injury to the developing brain. One in 700 Australian babies is diagnosed with cerebral palsy.  World Cerebral Palsy Day is October 6.

Georgie Hawkins is 18 years old, bright, beautiful and full of empathy born out of her own experience.

After making a premature arrival into the world at Royal Brisbane and Women’s Hospital, it was another six weeks before the tiny baby went home with her parents.

Her mother Kath Hawkins was originally admitted to Selangor Private Hospital in Nambour after her waters broke. She stayed there for a week and was told if she made it to 34 weeks she could have the baby there. She went into labour a week later and had to be rushed to Brisbane with lights and sirens.

Mrs Hawkins said she was supported right from the start.  Because of Georgie’s premature birth, medical staff were thorough with their examinations and quick off the mark with conducting tests. Georgie flourished until it was time to sit up and use her muscles –  after investigation, they were told she had cerebral palsy.

Georgie, a talented singer and guitarist, is now studying audio production. She says she came to choose her musical career after trying a few alternatives, including sports,  gymnastics and ballet.

“I gave it all a hot crack,” Georgie says with a smile in her voice.

“But I had to realise that this wasn’t really for me – physically it was too much to handle.”

Georgie has been given a diagnosis of spastic diplegia, which affects both her legs.

She says that over the years, as a result of two surgeries and ongoing therapy, she now displays little sign of disability.

But as a child she wore what she calls  her ‘splints’ – (AFOs or ankle-foot orthosis) that helped her walk. Yes, she says, kids did see her as different. But since her CP was mild, she was able to go between two groups – the kids at her school with special needs and a trained teacher and the others. Looking back, it was the perfect way to go. 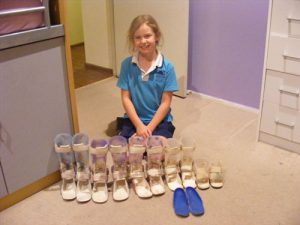 “For instance, if I was carrying books and they were too heavy, the teacher would naturally give me a hand. It was a good way of getting help without asking for too much.”

But during her early teenage years, she relates feeling very self-conscious over her body image.

“I kept comparing myself to others  – but now I know I can’t do those things.”

Georgie is keen to talk up the assistance, love and support that has been given her all through her health journey. Due to ongoing treatment, she has developed a special bond with Queensland Children’s Hospital staff.

“I remember when I was younger and I had botox treatment and had to wear a plaster cast for a week to stretch my calf muscle. The cast was rubbing a spot behind my knee and was getting painful. Mum rang the hospital and asked if we could call on anyone local to make some adjustments to stop the rubbing. One of the hospital staff who I’d known for a long time specially drove up the coast to my house with his tools and fixed it for me.”

These days, Georgie’s treatments are limited to doing her own daily stretches to stay supple and keep her muscles from stiffening up. She feels good and is looking forward to a strong and healthy future.

Finally, with conviction Georgie says: “I wouldn’t change anything; the whole experience has made me who I am.

“I think I have more empathy than other people when it comes to disabilities.”

And Georgie does her bit to promote understanding of disabilities.

“People ask me how they should act around people with disabilities,” she says.

“I explain to them you don’t have to change – they’re the same, they’re just a little different.” 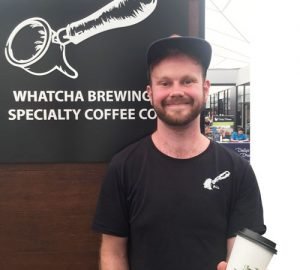 During his 26 years, this young entrepreneur has experienced plenty of negativity. The attitude has  occurred randomly and regularly in his social groups, school and jobs. Not that there is anything blatantly different about Mr Hedges. But there is a little difference and once kids at school found that difference, it made him vulnerable.

“You know what kids can be like,” he says. “They find your vulnerable place and go for it – people can be cruel.”

The owner of  Whatcha Brewing Specialty Coffee Co at the Big Top lives with epilepsy, mild cerebral palsy (CP) and mild autism. His epilepsy is controlled by medication and the type of CP he has, Dandy-walker syndrome, affects his right side.

For the interview, Mr Hedges and I are sitting at a side table beside his cafe. He gets up early for his business and he’s tired after a busy day. Nevertheless, he’s cheerful and switched on.

“So, when were you diagnosed?” I ask him Suddenly, I see his brown eyes water up. Without fanfare, but with deep emotion, Mr Hedges explains he was diagnosed at birth. Medical staff told his parents he would never walk or talk and that he would be forever wheelchair bound.

Then he gains his power, looks directly at me and says: “They said I wouldn’t live past 18… and here I am.” Mr Hedges says from that moment onwards, he was instilled with a mission – to prove doctors wrong.

His mother took time out from work to get him to a great team of brilliant and positive-thinking allied health professionals.

“The physios, the chiros – all those people supported me on this journey,” he says.

While he had all those people helping his body, at about 10 years of age, he decided to probe deeper into his inner self.

“I’ve learned you’ve got to love yourself,” he says. “I used to try and please everyone all the time and it just got too hard – it doesn’t work. So, since I left high school, I’ve been learning to be myself.”

Mr Hedges has spent a lot of time unable to find work and is now seeking partnerships with organisations that focus on improving the lives of people who live with disabilities.

“But I don’t like the word disability,” he says. “I prefer to use the word challenge.”

Mr Hedges is an ambassador for Epilepsy Queensland and donates 30 cents out of every doughnut he sells to the charity. He also hosts three fundraising events annually and works with EPIC employment to provide work experience for students. The cafe really is a culmination of his dreams, albeit quite unexpected.

Mr Hedges had moved from Brisbane to the Sunshine Coast to study exercise physiology at USC (he has just begun his second year).

A good mate found out the cafe was available and let him know that with all his hospitality experience it was about time he did his own thing, instead of working  for others.

He went into the cafe at a time when a lot of people were getting out, during COVID. In fact, his own parents couldn’t see how it would work during such a difficult time and advised against it.

But Mr Hedges decided to go for it, and he did so without telling his parents. The cafe opened in August and despite the odds, business is doing well and he’s even been featured on television.

Besides running his business and studying, his calendar includes partnering with Epilepsy Queensland to shoot a 10-video series tackling issues such as sexuality, drive and motivation. Further into the future the goal is to combine his coffee-making skills and exercise physiology to create a space that combines a cafe and a gym.

But right now, he’s on the job and  it’s back to work as the customers line up for a cup of his very fine coffee. 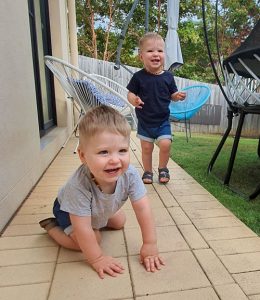 Carter with his twin Vincent

When identical twins Carter and Vincent Earney were born in 2019, their parents Morgan and Daniel were blessed with two big, bouncy babes. It was only at around 13 months old that mum Morgan, noticed that Carter wasn’t meeting the same milestones as Vincent.

“He wasn’t sitting up, nor crawling at all – like his brother, Mrs Earney says.

When she shared her concerns with the family GP, she was told not to worry, that Carter would catch up and that every child gets along at
their own pace.

Fortunately, a mother’s intuition prevailed and Morgan and Daniel went off to a specialist paediatrician. Within a week, the diagnosis of cerebral palsy was given, but interestingly that wasn’t the terminology put to them.

“We were told he had high tone,” Mrs Earney says.

And really that just prompted more questions than answers. In a short time, it was revealed that high tone referred to stiff muscles. Take that a step further and you are talking about cerebral palsy. Carter’s condition is called Spastic Diplegia – affecting his left side.

Because CP is to do with muscles and the part of the brain that controls the muscles, it’s doubtful that you will pick up on the condition in a baby. But early intervention can make a real difference.

Carter began treatment with physiotherapist Paula Beall four months ago. In quick time, he began crawling and on receipt of his walker he began taking his first steps.

Mrs Earney’s experience has led her to understand how important it is to follow your gut feelings and move ahead on them. Carter’s future is bright, but he will continue to have ongoing treatment to ensure he lives his best life.

Mrs Earney adds: “I don’t know what the treatment will be, but it’s putting us on the right track.”

The bright side
Boxes of sunshine