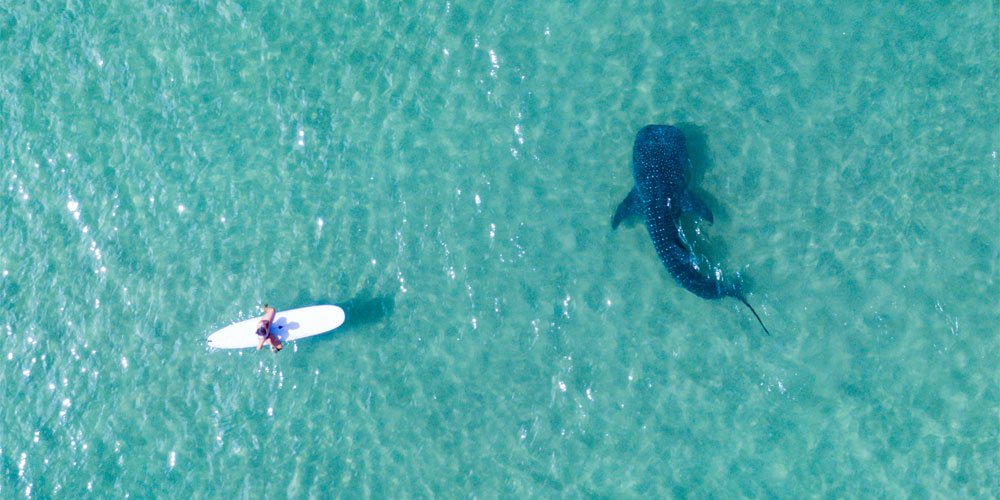 Its spots were clearly visible in the crystalline Noosa waters, a rare sight for this part of the world. Long-time locals said they’d never seen one at Noosa. On January 27, a whale shark was seen swimming around surfers at Noosa and My Weekly Preview contributor Tracy Naughton captured stunning aerial photos and video that were sent around the world.

A surf photographer with an Instagram following of more than 25,000, she often heads down to the beach after dropping her daughter off at school. The Mount Coolum photographer happened to be in the right place at the right time with the right equipment to capture the images, which gained worldwide media attention.

“I turned up to the point in Noosa National Park – surfers calls it Nationals – and headed down to the beach with my gear and my drone. I managed to get a good half an hour’s worth of photos and footage of the whale shark. I was kind of worried as I didn’t want to get too close. I kept my drone 30 metres above it – I didn’t want to stress it out.

“I didn’t really know what I had until later that day. I put it on the Noosa community Facebook page and it blew up. I started getting enquiries from media. I knew it was worth something because it was the only professional drone up at the time.”

“It was totally rare and I was just lucky to be in the right place at the right time,” Mrs Naughton says. “I prepare for that by taking my gear with me wherever I go. It was pretty special I think.”

When the whale shark became stuck on rocks, a group of surfers and beachgoers jumped into the water to free it. Sadly, it was found washed up at Double Island Point two weeks later, with marine scientists speculating it may have been sick.

“Someone who was at Double Island Point messaged me on Instagram,” Mrs Naughton says. “They sent me the photo of it at DI and I was so sad. It’s nature, but it’s just not the outcome you hope for. I was so happy it had been freed at Noosa. I thought it was going to go and live a happy life in the deep waters, but obviously it had ended up there for a reason. I didn’t want to be the one to share the news, so I asked the girl who messaged me to share it.”

As saddened as she was to learn the fate of the whale shark, Mrs Naughton is heartened that she may have been the last person to photograph it alive, a beautiful memory of a spectacular creature. It’s a career highlight she can add to a growing list.

While she loved photography as a child, it was art Mrs Naughton first chose to pursue. Once she discovered the power of the camera, she was hooked. She uses a Canon 5D in an AquaTech housing in combination with a drone to capture the luminous beauty of our coastline.

“When I first started, I just photographed coastal culture,” she says. “I would do landscapes and sunrises. Then I wanted to start incorporating people, and the natural thing on the Sunshine Coast is to photograph surfers. They just make such a beautiful aesthetic.”

Mrs Naughton found her niche when she began to focus on female surfers.

“I like using feminine colours and I focus on the female form because I think it’s pretty beautiful,” she says. “Not that there’s anything wrong with the male form. I’m always looking at beautiful light and I like my photos to have a light airiness.”

When Mrs Naughton began photographing the Noosa Festival of Surfing in 2015, her work began to be noticed by magazines and brands. In 2018 she launched the She to Sea art show as part of the festival. It is a way to further celebrate women and surfing through a variety of artistic mediums.

With a strong signature style, she’s now working for the likes of the Novotel Sunshine Coast Resort, Freedom Furniture, Billabong and Roxy.

“Last year I supplied 64 framed fine art prints to the Novotel,” she says. “ When the pandemic first hit, I thought people weren’t going to want to buy artwork, but I couldn’t have been more wrong.”

Mrs Naughton’s prints are now in demand around the world and she is on a never-ending learning curve in a quest to perfect her art.

“I still have so much to learn with photography. I’d like to be able to paint full time, but it’s so much harder to be a full-time artist as opposed to earning a living as a photographer. There is so much possibility with where you can go with it.”

See Tracy Naughton’s She to Sea exhibition at Noosa Festival of Surfing, May 15 to 23. To see her photos, visit Instagram@letmesea.