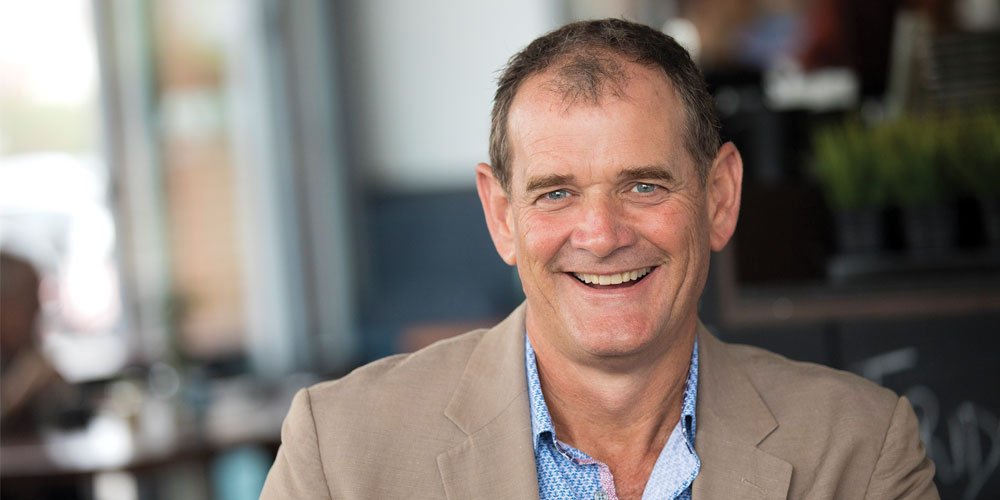 In 2015, Maroochydore businessman Darrell Edwards was holidaying in Spain when he lost his glasses. He couldn’t read his phone without them, which meant he couldn’t use Google Maps to get around, he couldn’t send text messages or make phone calls. An idea came to him like a bolt from the blue: why not design a prescription screen protector that eliminates the need to put your glasses on every time you look at your phone?

Five years and many hours of research and development later, he is on the verge of launching a world-first product that will eliminate the need to reach for your reading glasses every time you use your phone (which for most people is more than 150 times a day).

“I thought to myself, if I’m looking at a glass screen, why can’t I have it made to meet my prescription?”

His product, ForgetSPECS, is a prescription screen protector that uses nanotechnology to create a film that brings your screen into focus.

The local business community will recognise Mr Edwards as the former CEO of the Regional Development Australia, Sunshine Coast. What they won’t know is that during the two years he held this role, he was spending his evenings and weekends developing the product in the hope it will remove the frustration millions of people experience with putting their glasses on every time they need to look at their phone.

“I’ve wanted to get rid of my glasses since I was about 25,” he says. “My script is +2. I hate carrying my glasses around with me. I hate wearing them. With the reliance on mobile phones these days, people are even more reliant on their glasses. I thought it was just me that was frustrated with wearing glasses, but everyone I talk to says they want to be able to read their device without glasses anywhere, anytime.”

Mr Edwards spent a few years researching the idea and in 2018, decided to devote himself to it full time. “I set out on a global search for a manufacture who could make our prototypes,” he says. “That led me to Japan, Singapore, China, Germany and finally the USA, where my current manufacturer is, as well as my current mould manufacturer. I’ve spent over 12 months working with them to develop a prototype. There have been a few blows along the way, but that just makes me more determined to find a solution.

“I’ve had so many no’s and knock-backs, people saying it can’t be done. When you start stumping up large amounts of your hard-earned capital and your family’s capital, you really start to question, will it work? Is it worthwhile? Are the risks worth it? Am I just being pig-headed and can’t
see the forest for the trees? You’re constantly second-guessing yourself and that’s where persistence and resilience comes into it to keep fighting for what you believe in.”

Originally a Wide Bay boy who spent many years working for ANZ, Mr Edwards has lived on the Sunshine Coast most of his adult life. He has two adult sons and lives in Maroochydore with his wife of nearly 33 years, Margo.

“She motivates me,” he says. “She is the reality check. She is always challenging my thinking and she brings out the best in me. I’ve always been innovative in coming up with different ways of doing things; even when I worked in banking, I was trying to challenge the norm. When I took eight months off in 2015 and went to Spain, I started looking into business opportunities – this one and quite a few other ideas. I decided this would be the one I would focus on.”

Mr Edwards gets up each morning and has a beach walk before heading to the Innovation Centre at the University of the Sunshine Coast, where he enjoys being surrounded by a startup culture of entrepreneurial, like-minded people.

“You often get an exchange of ideas and we support each other,” he says. “It’s a different mentality to normal business, particularly if you’re trying to launch a startup.”

Mr Edwards says ForgetSPECS will release one screen protector per phone model and it will cover a range of scripts from zero to +3.5.

“We’re focusing on Apple and Samsung devices at first,” he says. “The best feedback we’ve received is from a guy who’s got a +3.5 prescription. When I gave him my phone, he said he could read it. I said, ‘Now, take off your glasses’. He couldn’t believe his eyes – he could still read it. He was just blown away.

“I’ve spoken to people who are in the screen protector business and they’ve never heard of anything like this before. They can’t wait to get their hands on it. If there was another product out there like this, I would have bought it in 2015.

“This is a world-first product. The technology we’re using is nanotechnology. We work with lenses that are measured in the size of microns, which is one-thousandth of a millimetre – so small we can’t even see it with a light microscope. Each screen protector contains millions of tiny nanotechnology lenses. Trying to get the light refraction right, as well as embedding it into the lenses, has been difficult. I guess that’s why nobody’s done it in the past. But through hard work and persistence, we’ve created a world-first product.”

You can register your interest in ForgetSPECS and pre-order when the product becomes available at forgetspecs.com. Follow and share the story at facebook.com/forgetspecs.

A hard act to follow
Out and about: Your Mates Beer & Yoga