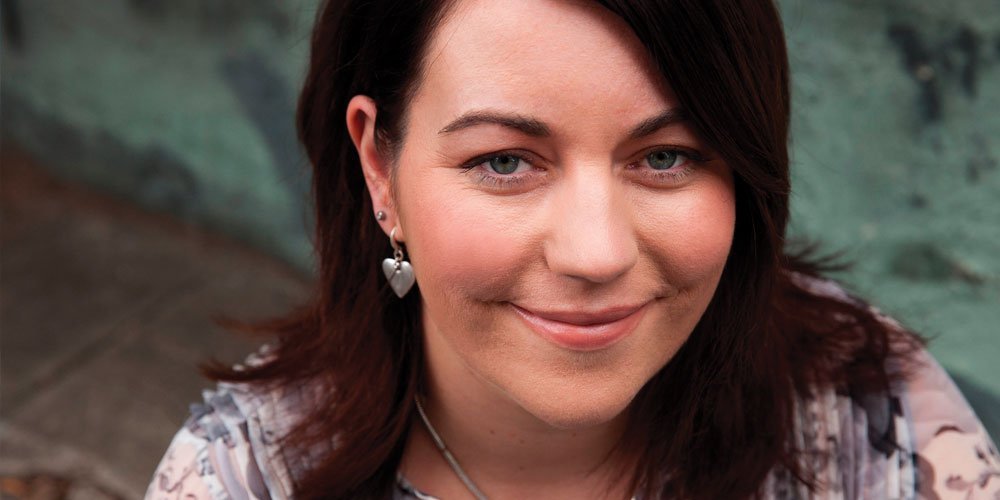 Rachael Johns’ husband jokes that she tells lies for a living, and as one of Australia’s most successful authors, it’s not far from the truth.

“All I do is sit around and make stories up; it’s not that important,” she says. “I’ve got friends who are midwives, teachers, mental health workers – those jobs seem to be more important to me. But then I get an email from a reader who says ‘your book drew me out of a depression’ or ‘brought me out of a dark time’. It’s emails like those when you realise fiction, film, music – they mean a lot to people and help people through dark times.”

Ms Johns didn’t always dream of becoming a writer. She fell into it almost by accident, then discovered she liked it. After a devastating breakup at the age of 17, she began writing, and while she says her work was cringe-worthy at first, she found it therapeutic. “I never dreamt of being a writer and I wasn’t a big reader,” she says. “I wasn’t interested in the books they make you read in high school. I did reasonably well in English, but it wasn’t a huge passion of mine. I always wanted to be a primary school teacher. Then a vet. Then I wanted to read the news for Channel Seven. Then I wanted to be a nutritionist. The closest I would’ve come to writing was doing six months of journalism at uni.”

When she began to write at 17, she wasn’t sure if she had talent but she knew she enjoyed it. What began as a hobby became something she felt driven to make her vocation.

“It took a long time,” she says. “I was writing for about 15 years before I finally got published. I targeted Mills and Boon for a few years. I did a writing degree at uni. They wanted you to write literary fiction and that wasn’t me. I wanted to write Bridget Jones’s Diary-type books.”

The turning point in her career came when she connected with the Romance Writers of Australia organisation.

“I met my publisher at a romance writers conference,” she says. “I had submitted to every publisher in Australia and had been rejected. Harlequin took my first book Jilted on and since then, so many other Australian publishers have approached me and started publishing a lot of other romance.”

She is visiting the Sunshine Coast for the first time on November 8 to talk about her latest offering, Just One Wish.

“I’m a jigsaw writer so the inspiration for this book came from different places and I put it all together to create one book. The main theme that started off this book was, what does it mean to be a woman, especially in this era where we can supposedly have it all? I wanted to explore the issue of whether we can have it all or if it’s making us more stressed.

“There’s a few other fun things in there too – there’s the desire to go to Mars, there’s an Elvis Presley cruise. My books explore darker issues but in a light way.”

When she first started out and her children were small, she’d write at night and on weekends. Now they’re all in school, she writes full-time, aiming for 2000 words a day.

“I’m not what we call a plotter or outliner,” she says. “I do think a lot about character before the book starts. For this book there are three main characters. I wrote lots of notes about their backstory and I did a lot of pre-thinking. I like to know the end if I can but I don’t always. I don’t focus on structure consciously, but it’s in my head so it comes naturally now.

“In the fiction world we say you’re either a plotter or a pantser [someone who flies by the seat of their pants]. Everyone is on the spectrum somewhere and I’m definitely in the middle. I just sit down and hope it works.”

Ms Johns says it’s a myth that once you’re published, you’re a successful author and your fears subside as you watch the dollars roll in. “I still suffer hugely from self-doubt,” she says. “It’s crippling and it slows you down. It’s easy to think everyone else’s books are better. I have to remind myself, when I’m writing my first draft, I’m comparing it to somebody else’s award-winning bestselling novel, which has been through a number of drafts.”

Ms Johns says she answers all correspondence from fans and loves meeting readers. She’s looking forward to meeting Sunshine Coast fans and will be in conversation with Sunshine Coast personality and author Mary-Lou Stephens.

The talk will be held at Buderim Tavern function room at 10am on November 8. For more information visit library.sunshinecoast.qld.gov.au/Whats-On/Author-Events/Meet-Rachael-Johns.