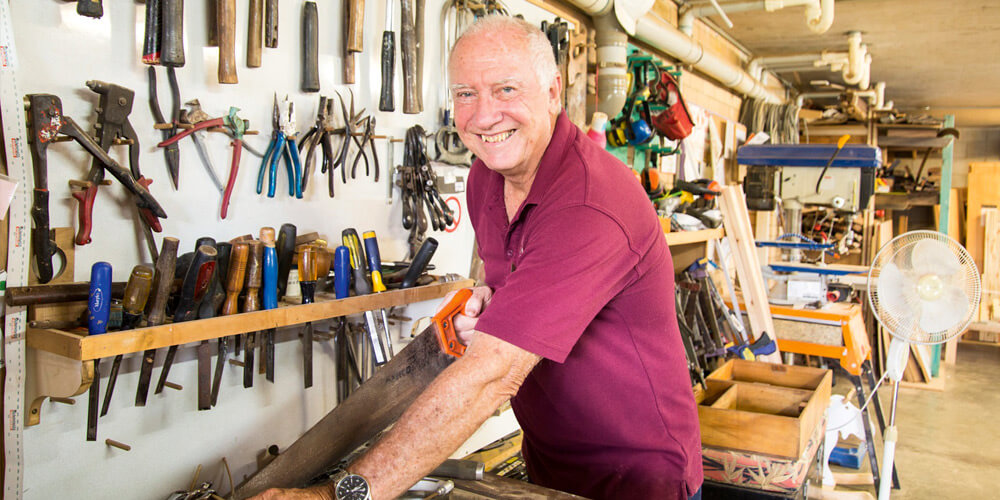 “In a unit you can’t have a workshop or any tools, there’s no room to do anything,” he says. “In retirement you have a lot of time on your hands. You can play golf and do a bit of travelling, which is great, but there’s only so much of that you can do before you start thinking there’s got to be more to life.”

Mr Cheales won an Order of Australia Medal for his contribution to sport after many years competing as a gymnast and serving as the inaugural national coach for 10 years, as well as officiating at a national level. He competed at the Turkey Olympics in 1964 and the Mexico Olympics in 1968, coached the Australian gymnastics team at the 1972 Munich Olympics and was the manager coach at the Montreal Olympics. Along with Ros, also a gymnast, he started the Brisbane Gymnastics Club, which ran for 25 years, and he also lectured in human movement studies at the Queensland University of Technology for more than 30 years.

It’s clear an idle retirement was never going to be an option for this dynamo. When he heard about Buderim Men’s Shed, which was established in early 2011, he signed up. Today, he’s vice president of the organisation – one of Australia’s largest, with 298 members – and is busy organising grants and tackling admin for the rapidly expanding group.

“My Dad was a home handyman and taught me some basic skills in my youth,” he says. “I always worked on the basis if it’s broken try and fix it, if you can’t fix it, get the professionals in. I built a lot of furniture and renovated houses while the kids were growing up. Since joining the men’s shed, I’ve made a couple of cupboards, bread boards and occasional tables. Now I’m in the office, working with governments and fundraising sources.”

Mr Cheales has experienced first-hand the physical, mental and emotional benefits men’s sheds provide. With 12 sheds on the Sunshine Coast alone and 1100 across Australia, the movement has taken off in recent years.

“The main benefit of joining a men’s shed is having somewhere to go where you can talk to blokes without being judged,” Mr Cheales says. “You can tinker making toys or learn a new skill, it activates the brain and over a period of time you have a new bunch of friends. Blokes talk about a colonoscopy they just had, someone will say, ‘geez, I need one of those, how did it go’? You get more information you probably wouldn’t ask your doctor about.

“Guys will probably open up a bit more freely if they’re actively doing something and working with a couple of fellows. The smoko room is also a great avenue for people opening up. Some just listen and don’t say anything.”

With the sense of isolation that can accompany retirement contributing to depression in older men, Mr Cheales believe men’s sheds provide an invaluable haven.

“There’s good camaraderie in the men’s shed movement,” he says. “It’s just such a good thing for blokes. They say to us the women in Buderim are happiest on the days the men go down to the shed. You can’t say because a man went to the men’s shed he didn’t commit suicide, but we have anecdotal evidence from individuals and families saying the men’s shed has been the remaking of their father or husband. He’s found a new lease on life and found somewhere to go and to be valued.”

Mr Cheales says at least 100 blokes turn up to the general meeting every third Tuesday and there’s a mandatory health talk afterwards, with health professionals visiting to address everything from prostate cancer to how to lift properly. And the shed isn’t all about woodwork, either. It also offers gardening, art, lead lighting, toy making, metalwork, computer skills, leatherwork, upholstery, billiards, a book club and a ‘yackety yak’ session, which is all about having a good old chinwag about a chosen subject with a TAFE teacher facilitating.

Buderim Men’s Shed’s home at Mill Road has been generously provided by owners Dr Bill Glasson and Professor Claire Jackson, however this was a temporary arrangement. On Tuesday, the first sod was turned on the new Buderim Men’s Shed property at Kuluin, which will hold three sheds – one to house the hard machinery, one for central administration and the third for an art studio.

The Federal Government awarded the Buderim Men’s Shed a grant of $500,000 under its Building Better Regions program for the new facility. Buderim LNP candidate Brent Mickelberg has pledged $600,000 if he wins the seat in the upcoming state election, while Buderim One Nation candidate Steve Dickson has pledged $500,000 if he wins. There have also been many donations including $170,000 worth of earthworks from Shadforths Civil Contractors. The group has also raised $400,000 of its own.

It’s hoped two upcoming fundraisers will add to the funds already raised. The first is the annual Open Day, to be held on Saturday, November 18, where visitors can purchase handmade items. The second is a breakfast at Buderim Tavern on Friday, December 8 featuring bestselling author and body language expert Allan Pease.

“It has been a big learning curve for a group of retired men over the past four or five years to build the shed into what it is today,” Mr Cheale says. “When fellows go on holidays, we visit other sheds and fellows from other sheds come and visit ours.

“We also work closely with the University of the Sunshine Coast. We provide subjects for the Thompson Institute (neuroscience research centre) and we have exercise physiology students come up and do work placements.”