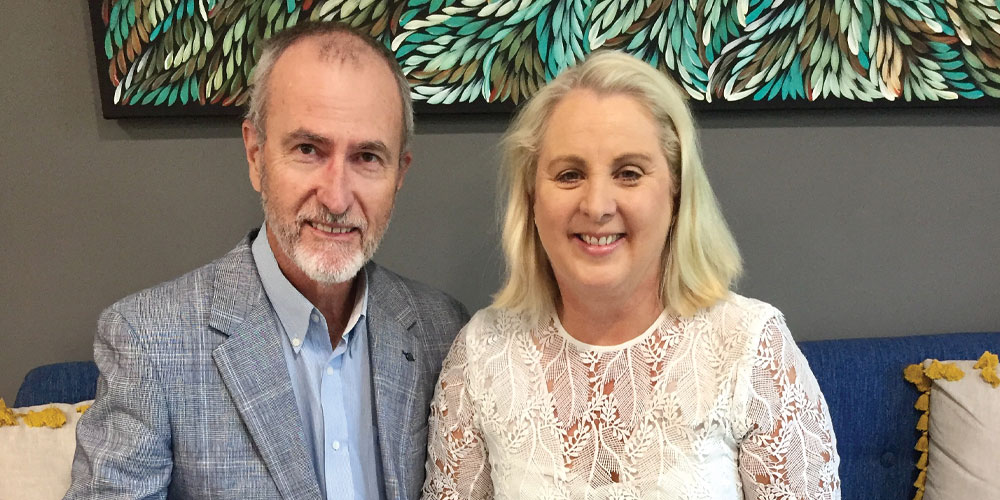 Sandra and John Reardon are quiet achievers who have made a lasting mark on the health of many locals. The pioneering couple is best known for establishing Cotton Tree’s Sunshine Coast Haematology and Oncology Clinic in 1998.

It’s a model that has been recognised for its foresight in the way it approached cancer care. At the time, it was the first freestanding clinic for the treatment of cancer and blood disorders in Queensland and it broke new ground, taking cancer treatment out of clinical hospital environments and moving it to a more homely environment.

“The main reason John and I did it was to have specialist nursing care under one roof,” says Mrs Reardon.

“John was on the road all the time. At that time, no one could cannulate so he’d put the line in and if it stopped for some reason, he’d have to go all the way back to the hospital to reset the drip. It was really inefficient and when we started the clinic at Cotton Tree, he was only six paces away.

“That was the real reason we did it, but then it became not only specialist nursing staff but specialist admin staff under one roof and it was really successful because you had like-minded people working together and the patients picked up on that.”

Mrs Reardon ensured the clinic was centred on the person with cancer.

“People were very positive in their comments about the fact it was non-threatening,” Dr Reardon says.

“The whole idea of getting a chemotherapy unit out of a hospital is it eliminates the hospital. Instead of going to hospital all the time, which reinforces the ‘I am sick’ stereotype, it was a lot more comfortable and a lot less confronting.

“Ninety-eight per cent of my patients having chemo are independently mobile,” he says. “They don’t require the facilities of a hospital. They just need to come in, have their treatment as quickly and comfortably as possible, and get out and get on with their lives.”

The husband and wife team ran the clinic at Cotton Tree for 18 years before selling to Montserrat Day Hospitals. In July, a $10-million purpose-built facility to house the new Sunshine Coast Haematology and Oncology Clinic and GensisCare Radiation was unveiled. It’s the first centre of its kind on the Sunshine Coast, with the ability to deliver more than 15,000 treatments in the first year alone and 10 specialists on site, including allied health professionals and a gym.

Montserrat is now opening clinics in other locations. “They’ve realised this model has been highly successful, with great patient satisfaction, and consequently, they’re implementing it in their new hospitals across Australia,” Mrs Reardon says.

Dr Reardon still works full-time in the business, while Mrs Reardon manages his practice. She is also health ambassador for two other Montserrat hospitals, representing the company at events such as Samuel Johnson’s Love Your Sister tour to the Coast.

As we chat in Dr Reardon’s new office, I have a stunning view across the leafy edges of Buderim and down to our coastline. The foyer area is large and flooded with natural light and there’s a lovely feel throughout the centre.

“I’ve always emphasised the importance of natural light,” says Mrs Reardon. “Natural light is really therapeutic. The treatment area downstairs looks out to the same view as you can see from John’s office. You might be waiting for your treatment and feeling quite anxious, and distraction is a powerful thing.”

Both Dr and Mrs Reardon say they’ve made a great team, but Dr Reardon attributes the success of the business to his wife.

“I have to give credit to Sandra,” he says. “She travelled to Brisbane when we were first setting up and got the licence. There were rezoning issues and she worked with the architect and builder, she got the contracting and accreditations in place. I just kept my nose out of it.”

Dr Reardon says the many patients he’s seen over the years who didn’t have to drive to Brisbane thanks to his and his wife’s clinic is something he’s proud of, because it contributed to each patient’s quality of life. Mrs Reardon echoes his sentiments and says both the former clinic and the new one make undergoing treatment as easy as possible.

“This is probably the most beautiful place to have cancer treatment in Australia,” she says. “They can drive in, have their treatment, drive out and go to lunch afterwards.

“We’re really proud of what we achieved. We loved what we did, personalising their care, and we had a lot of fun along the way.”

The new centre is located in the Buderim health precinct at 10 Kings Street.

Continue Reading
You may also like...
Related Topics: Health, Medical