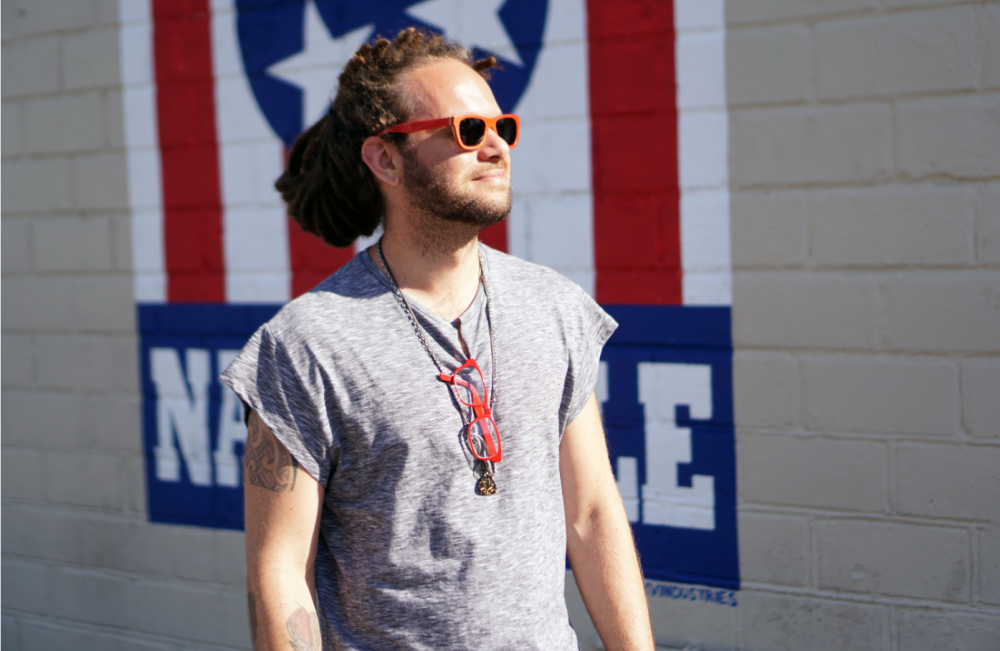 With his trademark red glasses and dreadlocks, Carl Wockner is one of the Sunshine Coast’s most recognisable musicians.

A charismatic performer with loads of personality, his raw talent and business sense have enabled him to create a successful music career at a time when the music industry is struggling with the impact of digital disruption.

Originally from Bundaberg, Wockner moved to Maroochydore when he was 25 and spent 10 years playing around the local traps before springboarding a year ago to Nashville, Tennessee, one of the world’s music hubs, to work with producer Michael Flanders.

Having become a crowd favourite here on the Coast, he’s gone back to square one in the US, a small fish in an oceanic pond, with his bespectacled sights set on stardom. In 2015 he became the first Australian artist to win top honours at the International Acoustic Music Awards and his latest album Crayon Days was nominated for Best Adult Contemporary Album at the 2016 Independent Music Awards.

Playing seven gigs a week, he’s one of Nashville’s busiest musicians and now he’s turned his talents to the silver screen. He recently landed an acting gig in an upcoming Hollywood film, An L.A. Minute starring Gabriel Byrne, and co-wrote the score.

But he and his family still call the Sunshine Coast home – he’ll be back for shows in December – and plans to be based back on the Coast full-time eventually.

“It was while we were living on the Coast that I gained most of my current fans, partly because of the music scene on the Coast, but mostly during that time I found the Sunshine Coast a great base to get out and all over Australia from,” he says.

Wockner describes his music as a mixture of pop and a new genre called Americana, which is “folk meets singer-songwriter meets roots meets acoustic”. Complementing his rich vocals with guitar, bass, drums and percussion, Wockner is a man of many talents, but that’s not enough to succeed.

“You have to take your musical career seriously and begin treating it like a business,” he says.

“One of the biggest issues I see with young artists is their lack of commitment to the whole picture. Just writing songs or playing gigs alone will not lead to anything more than that.”

Wockner promotes himself on social media and is pragmatic about the impact of streaming sites such as Spotify and Pandora.

While streaming undoubtedly hurts artists in the hip pocket – Spotify for example only pays between $0.006 and $0.0084 each time someone listens to a song, a recent article in The Guardian suggested it’s now being seen as the antidote to music pirating, as people prefer to pay a subscription fee for convenient music access rather than venture into illegal downloading.

Wockner embraces streaming as a way to connect with fans, but has a word of warning for fellow artists questioning the right way to negotiate sales in the digital age.

“I would encourage artists to put their music in a place where it isn’t worthless. As long as the streaming sites pay royalties, as small as they may be you can use them. Just don’t give your music away for free, unless you’re getting something out of it, like an email address. Spotify is much better than a free download, especially when you have spent time and money to write and record.

“Everyone values music in a different way, but it must always be put in a place where the artist can receive something in return.”

Up-and-coming musicians questioning whether a music career is even viable these days can take inspiration from self-made artists like Wockner, who are optimistic about the future of the industry.

“Music can absolutely be a sustainable career,” he says. “I’ve been sustaining it for over 10 years, without any hint of it dropping off in the next 10. Provided you include equal parts creativity and business sense, I believe it’s a fantastic industry that’s ever changing. You’ve just gotta keep up.

“I am determined to show people that the truly organic way is still around. That is: fan hears music, fan buys/streams music, fan shares music to other fans, goes to a gig, rinse and repeat.”

It’s a sentiment shared by Wockner’s friend and fellow Sunshine Coast musician Andrea Kirwin, who has played 300 shows in the past year and records and produces her own albums. The Nambour singer-songwriter, whose soulful roots and folk sound is reminiscent of Tracy Chapman and Joni Mitchell, is one of the Coast’s hardest-working musicians.

Kirwin says she doesn’t turn her nose up at any opportunity to play, whether busking solo in Eumundi, playing at cafes and restaurants or fronting her band at festivals, corporate gigs and big venues.

“I’ve been playing music for 10 years and I released my first album in 2014,” she says. “About a year and a half ago I quit my day job and started doing as many shows as I could. I got to the point where my music could sustain me, so both myself and my partner quit our jobs. I earn about the same as what we were both earning with full-time jobs.”

Kirwin regularly plays interstate but says two-thirds of her work is on the Sunshine Coast. She plays at least 40 local venues regularly, not to mention festivals like Caloundra Music Festival, Woodford Folk Festival and Maleny Music Festival.

“I reckon the live music scene is the best in the country on the Sunshine Coast. I can see a whole wave of artists doing really well at the moment. I haven’t seen this drive to have live original music elsewhere – in cities they often just want covers. A lot of my friends in Sydney and Melbourne play in cover bands and do original music only occasionally.

“I’ve lived in Melbourne, Sydney and Canberra and I think if you wanted to be a singer-songwriter, this is the place to live. Every week I do six or seven gigs.”

Kirwin says the large turnover of tourists on the Coast is what makes it a prime location for musicians.

Like Wockner, Kirwin sees streaming as a chance to reach more fans: “I think in this day and age you have to put as much effort as you can into connecting with your audience, so I use streaming sites because I prefer for people to listen to my music through Spotify rather than not hear it at all. It strengthens the connection.

“Festivals take into account how many Spotify listeners you have these days because they want to sell tickets,” she says.

“People saying they’re not into streaming is a bit similar to artists saying they won’t do certain gigs because it’s not paid enough. You have to promote yourself and basically act as a label.”

Kirwin advises emerging musicians to invest in professional photography and find a mentor who is active in the industry and can give advice on support services like Q Music, which runs competitions and workshops. The Turn Up! Sunshine Coast Music Industry Conference is one such resource, started last year to connect Sunny Coast musicians with industry movers and shakers.

Mason Hope: appreciate and reciprocate to build a better industry

One of the artists who went along to Turn Up! last year was 17-year-old Kuluin musician Mason Hope, who has since become one of the Sunshine Coast’s most talked about artists – least of all because his face is plastered all over the sides of buses in a series of TAFE ads (he’s studying sound engineering) and he’s a national ambassador for youth mental health organisation Headspace.

“The Sunshine Coast has got it going on for the music scene,” he says. “There are diverse genres happening here, so many awesome venues that do live music.”

If Hope’s recent achievements are anything to go by, he has a bright future.

He won the 2016 Voice of Urban Country Music Festival and took out pole position at the 2016 Gympie Muster Talent Search. This year he won the Trans Tasman Entertainer of the Year award on Norfolk Island, played the Tamworth Country Musical Festival and Byron Bay Bluesfest and won the under-18 category of Songs of the Sunshine Coast. He’s booked to play the Gympie Music Muster in August followed by Caloundra Music Festival.

Not unlike a young Elvis, he has his sights set on the US. Not bad for a 17-year-old who was bullied at school because he was being raised by his grandmother and was different.

“The first instrument I learnt was drums, because my Nanna always used to see me tapping around the house. She said it would be a good way to have a release. I could get home, get a bit angry and bash it out on the drums, hit them hard and relieve the anger I had bottled up inside.”
Hope is currently recording his first album in Hervey Bay with Pacific International Music, the same production company working with Carl Wockner.

“My songs are a mixture of genres but all of it is storytelling,” he says. “It’s all about the lyrics. I wrote a song a long time ago when I was about 15, about dealing with the cool factor. I was wrapped up in the gotta be cool, gotta look cool thing. It’s about being cool just by being you. My songs can often be stories about something personal. I wrote a song called You Are My Home, about how my father left me when I was much younger and my mother wasn’t able to look after me, as she got ill, and Nan picked me up.”

It’s hoped his single and video, Get Me To Memphis will be his platform into the Nashville music scene, where he’ll no doubt cross paths with Wockner, who taught him a bit of guitar back in the day. Like Wockner and Kirwin, he’s got his head screwed on right.

“The music industry has had some big changes and a lot has to do with how music is downloaded and streamed, therefore there is not the massive amounts of money available from record companies, so artists like myself are doing much more than just performing. We have to be very business savvy.

“It all comes down to the people who listen to your music and come to the gigs. For upcoming artists – learn the music business. There are some fantastic local conferences like Turn Up! with invaluable info and connections for emerging artists at every level. Also, appreciate and reciprocate to build a better industry. Be thankful to the people who come to see you and buy or listen to your music. They are never fans to me; they are friends who appreciate music as much as I do.”

Can-do guy in his best role yet
Defying the odds