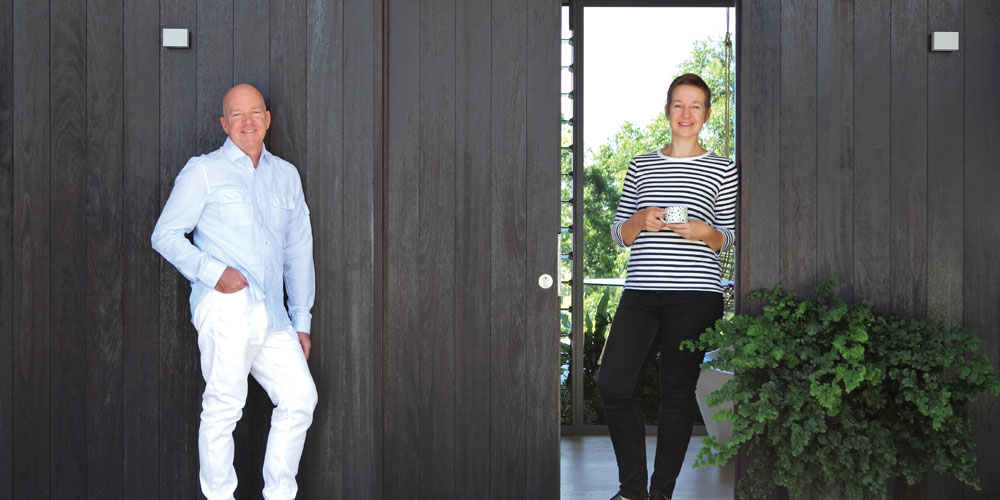 If you’ve visited the Rainforest Discovery Centre at Mary Cairncross Scenic Reserve in Maleny in the past two years, you will have no doubt marvelled at the new building, which blends beautifully with its stunning surroundings.

Completely redesigned and rebuilt in 2017, it has won 26 awards to date and much praise from locals and visitors alike.

The team behind the stunning construction is Maleny couple Norman Richards and Fiona Briody. To add to their long list of awards, they won three more at the National Association of Building Designers Awards in October, two of which were for the discovery centre at Mary Cairncross, designed in collaboration with Guymer Bailey Architects.

Bathed in natural light, it features locally sourced natural materials including blackbutt, tallowwood and ironbark timber and local basalt stone. This aesthetic is a hallmark of the couple’s work, which also includes the Maleny Community Centre and a number of award-winning home designs and renovations, including R-B House, which won Best Alteration/Addition Residential Design up to $350,000 at the October awards.

“We live not too far from Mary Cairncross and we go walking there quite often,” says Ms Briody. “We knew it was a sensitive site for the community and people loved it how it was. We worked really hard to ensure it still had that feeling of connection to the rainforest. We love seeing people enjoy the spaces there – that’s the biggest reward.

“It was carefully considered,” Mr Richards says of the design. “The big window space north, the entry court sheltered from the south-easterlies, the overhangs that allow sun in winter and not in summer. The basalt blade walls direct your view to the mountains and back to the forest.”

Ms Briody adds, “There’s a lot of consideration that goes into it. We always do all of our designs in 3D models. We look at where the sun will be on every day of the year so we can design overhangs and be able to make spaces that are comfortable year round. Living locally gives us a knowledge of the micro-climates.”

“Your spirit just feels good when you’re in a space that’s well lit and elegantly proportioned,” says Mr Richards. “These things are important. The use of simple but good materials – natural materials.”

The couple spent a year perfecting the design and working with a committee of 13 people, so it was a thrill to finally lay eyes on the finished product.

“It’s amazing, first walking on a site where you’ve had a vision of what you wanted to create,” says Mr Richards. “It all starts with sketches using a 6B pencil. To walk back with it built and it’s doing what you envisioned it would do and it’s going to be there for a lot longer than me, that is very cool.”

“That feeling never gets old,” says Ms Briody. “Every project we work on, we have that feeling. We spend so long on the computer building models that it’s a very exciting feeling when we’re on site.”

Mr Richards grew up in Toronto and nurtured dreams of becoming an architect from the age of eight. In 1988 he received a Bachelor of Architecture and a Bachelor of Environmental Studies and opened his own design/build practice in Toronto.

“I was obsessed with drawing spaces and buildings and I was inspired by the modern architecture in Europe,” he says.

“After graduating, I did design and building for 10 years because I felt you should know how to build if you’re going to design something. We were doing high-end commercial work, boutiques, the sort of thing young graduates do. I also did public art, all designed and built by myself at the time. It was very hands-on.”

Ms Briody is a building designer with a background in environmental engineering. She and Mr Richards met on a scuba diving trip in Indonesia and discovered a shared love of architecture and nature. After living in London for seven years, they came to Australia, settling in Maleny in 2004. There, they have raised two children and created a building design business that punches well above its weight.

“It’s definitely quality over quantity for us,” says Mr Richards. “Maleny is a place we can have great clients, a benign climate and a lifestyle you would only dream of if you lived and worked in London.”

“We also get to do new buildings here, whereas in London you’re mostly doing renovations,” says Ms Briody.

“It’s nice because we can help to improve our local environment, bit by bit, so we get the benefit too. We are in rural Australia yet we’re doing work that’s getting national recognition, and we are able to enjoy the wonderful lifestyle of the Sunshine Coast.”

Continue Reading
You may also like...
Related Topics: Mary Cairncross