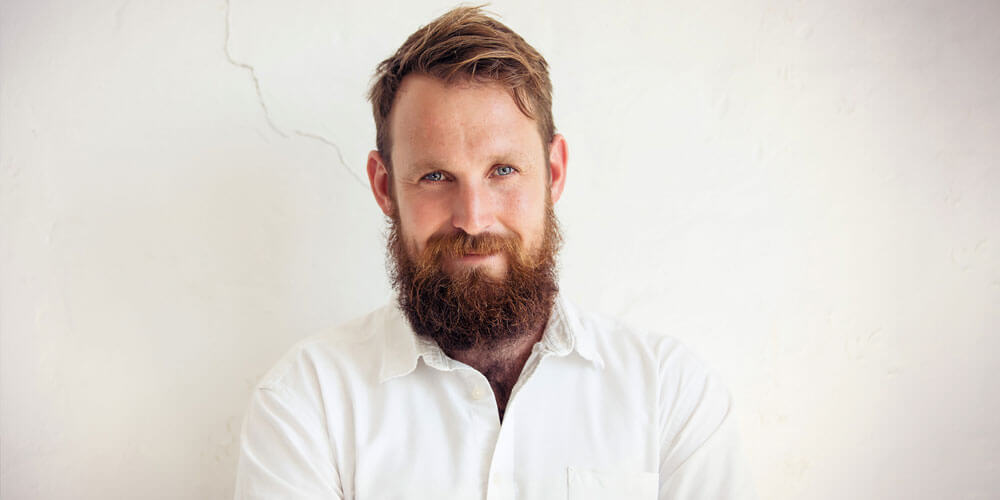 A healthy ego isn’t a bad thing when you work in TV, but it’s something Paul West has kept in check since he shot to fame on River Cottage Australia, a show that premiered in 2013 and ran for four seasons.

He was a chef working in Tasmania when he applied for the role and moved his life to Central Tilba in New South Wales to grow his own food on a sustainable farm. He needed a good farm dog and answered a notice at the local IGA for a puppy, a charismatic border collie he named Digger.

Digger proved to be a scene stealer on screen and before long, Mr West had become Digger’s sidekick in viewer’s minds, rather than the other way around.

“Every event I do, I can be guaranteed the first question will be, ‘where’s Digger?’, or ‘how’s Digger?’ or ‘is Digger here?’. It’s always a Digger-related question straight away. People watched him grow over four years and they feel they really know him. He usually gets recognised before I do.”

Digger’s now getting used to a different lifestyle in Thornbury, Melbourne, where Mr West lives with his wife and two young children while he embarks on a new project. He’s learning to grow food in a suburban backyard and writing about it in a new book due for release in September.

“Digger is probably the one struggling with the transition the most, going from free range on a small farm to a suburban backyard,” Mr West says. “But living in the city is not without its benefits for dogs. Whenever we go for walks, there’s always a lot of stuff for him to sniff and eat.”

The family arrived in Thornbury in October last year and Mr West got straight into planting out the garden.

“I was caught on the hop in terms of getting a summer garden in as I didn’t get the lead-up time,” he says.

“Luckily, I got a lot of stuff in when there was still a lot of warmth in March. I planted a whole stack of leafy greens – loose head lettuce, rocket, mustard greens, parsley, chives, silverbeet, kale, chard, broccoli rabe and Lombok cabbage, which I use to make sauerkraut and kimchi.”

He’ll be sharing his insights with the Sunshine Coast when he visits the Queensland Garden Expo for the first time, and with his down-to-earth charm and quick wit, he’ll no doubt prove a popular speaker (sorry folks, Digger won’t be with him).

“The main thing I want to talk about is how easy it is to grow food that can come into the kitchen,” he says.

“The importance of growing things like greens and herbs and how you can use them. They’re relatively easy to grow.

“But even the simplest task can be alienating if you haven’t crossed that bridge into actually doing it. We see experts’ gardens, lush paradises and someone looks at the one-square-metre veggie patch they dug into the lawn and they go, I can’t do that. I’m breaking it down and making it accessible and I encourage people to take the plunge.”

Mr West has fond memories of the Sunshine Coast, having studied a permaculture design course with Janet Millington in Eumundi in 2006. These are principles he’s still leaning on.

“What I found with my time in River Cottage is not everyone lives on 20 acres and it’s not a good idea to live on 20 acres. There’s a wave of young families moving into our area who are really interested in being involved in their own food production, but because of work commitments, the idea of moving to the country is unattainable.”

Mr West loves the idea of Buderim’s urban food street and applauds his good friend Costa Georgiadis for having gone in to bat for the community when the Sunshine Coast Council removed much-loved fruit trees in May last year.

As the lovable host of Gardening Australia, Mr Georgiadis is a popular return speaker at the expo and Mr West says it’s humbling being on the same bill as the star.

“When I’m walking with him I feel like his security guard. I have to make people form an orderly line. Between Digger and Costa – and my old man who’s a yoga teacher and talks to me about ego all the time – it stops the ego from setting in.”

He adds, “I’m with Costa. I think any patch of bare ground should be for growing food – parks, median strips, verges, golf courses – anywhere there’s a little bit of ground. We’re living in a time of luxury where we’re not doing that.

“I really think the more food we have growing around us, the better. There’s a huge amount of biodiversity; it supports life, helps build communities. It’s not just the physical benefit of growing food close to where we live. There’s a whole host of physical, mental and emotional benefits to growing food.”

Paul West will appear at the Queensland Garden Expo, July 13 to 15 at Nambour Showgrounds. Visit qldgardenexpo.com.au.