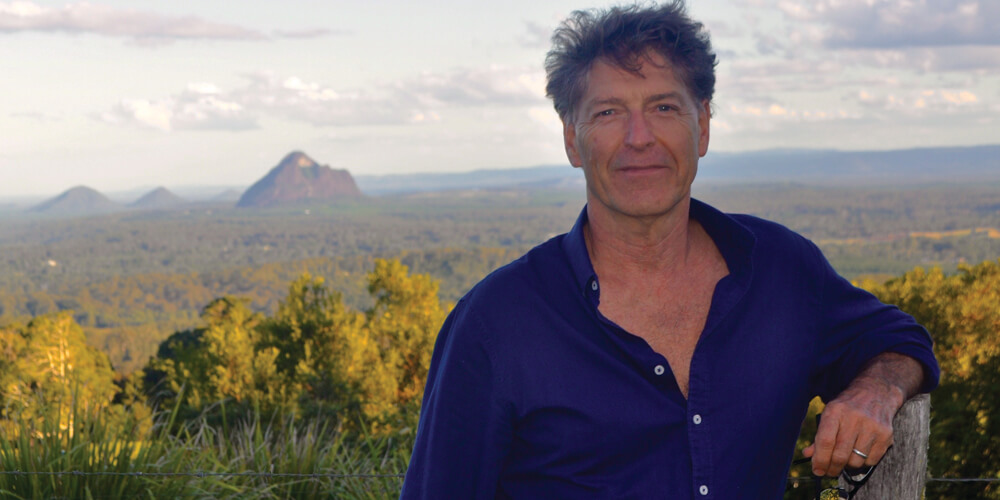 Steven Lang’s love of words and story stretches back to the age of four – the age he first knew he wanted to be a writer. Told it wasn’t possible and sent to boarding school at the age of nine, Lang struggled with the expectations placed upon him by his family and the constraints of the Scottish class system.

Born in Paisley in 1951, it was a foregone conclusion he’d follow his father, grandfather and great-grandfather into the family’s leather tanning business, but Lang had other ideas.

Emerging from his unhappy school years with an urgent need to escape Scotland, he set off on a hitchhiking trip around America, buoyed by the work of Jack Kerouac and armed with journals, which he wrote for many years, boosting his confidence as a writer.

“I had a bad time at boarding school and I didn’t like Scottish culture,” he says. “There was a very rigorous class structure and I was from the upper middle class. Everything was delineated by the way you spoke. Everybody could tell which part of society you were from by the way you spoke. It was difficult to relate to people; I couldn’t stand it.”

Arriving in Sydney in 1970, he felt immediately comfortable and lived in Glebe, the Blue Mountains and the far south coast of New South Wales before arriving in Maleny in 1989. Within six months of arriving, he knew he’d found his home. Surrounded by nature and a creative community, he finally published his first novel, the award-winning An Accidental Terrorist, at the age of 54. Now, the eclectic town he’s called home for almost 30 years has become the inspiration for his third novel, Hinterland.

Echoing his early years in Scotland, Hinterland has social separation at its heart. Set in the fictional town of Winderran, it’s receiving some of the best reviews of his career and will strike a chord with many Sunshine Coast locals.

“Some of the old settlers are deeply committed to conservation and that’s what makes it interesting,” Lang says. “This is Queensland and there are people who are wedded to the National Party and other people who are wedded to the Labor Party or progressive politics. I’m interested in those dynamics. The people who believe in the ideas on the opposing side to you have in their minds logical arguments for why they believe what they believe and once you inhabit them, those ideas become reasonable.”

Lang is a well-known environmental activist in Maleny, so you might expect him to push the green line in Hinterland, but he refrains from lecturing and instead, delves into the psychology driving each character, including the right-wingers, conservatives and politicians who hold viewpoints he’d probably disagree with in his own life.

While some Malenyites may think they recognise themselves in the book, Lang sets them straight: “It’s a work of fiction. I don’t subscribe to the belief I can use other people’s lives to people my novels. But I do put myself into every character. I have to get inside my life in order for them to breathe and feel things. When somebody feels grief, I have to imagine what it’s like to feel grief. I think that’s one of the reasons why people read novels – they want to know what it’s like to be somebody else.

“I do feel I have a right to comment on place and social structures. That’s why I’ve set it in a place I know, because I want to talk about the dynamics that occur in country towns. We’re living in a country where the rule of law ensures things don’t get out of hand, but I still think the way we behave towards each other, those social groupings, tend to fracture whenever a distortion of conflict enters the town.

“When I look at the dynamics of international politics and where civil war breaks out, how do these people who have been living there for generations separate into groups and kill each other?

“It seems to me that Australians have this view of themselves that they couldn’t do that or wouldn’t do that; they’re somehow better people than the people who live in Africa or Syria. I think that’s an illusion and a dangerous illusion. I think we’re all capable of that. I wanted to depict the cost that’s involved in allowing ourselves to separate into these groups.”

“I’m curious to understand how it is countries like Australia manage to stay peaceful with the rule of law and another country doesn’t. I don’t think it’s anything to do with the individuals, I think it’s to do with the political structures that govern us. I can see if corruption became more endemic in Australian politics than it is at present, you could easily end up with the same sorts of things happening here as elsewhere.”

Readers keen to know what happens next in the story will be pleased to know Lang is currently writing a sequel to Hinterland.

He’s happy with the book and the mostly positive reviews it has received, saying anyone who claims they don’t read reviews is lying, because writers are desperate for feedback. He does, however, try to keep things in perspective.

“You can’t become too precious about it because really it’s just entertainment. Reading a novel is a very sophisticated form of entertainment, but it’s still entertainment. You have to try not to get too pretentious about what you’re trying to achieve. But it is also a special form of entertainment. I don’t think there is any other situation in life where we give so much attention to another person as when we read a novel. With a novel, you sit down for 20 hours with someone else’s mind and you give yourself over to it.”

Seeking connection with others, as much as his love of language, is what drives Lang to keep writing and while he feels he still hasn’t quite mastered his art, he has found his “métier”. It may have taken 50 years, but the four-year-old boy has realised his dream.

Continue Reading
You may also like...
Related Topics: Profile, writer