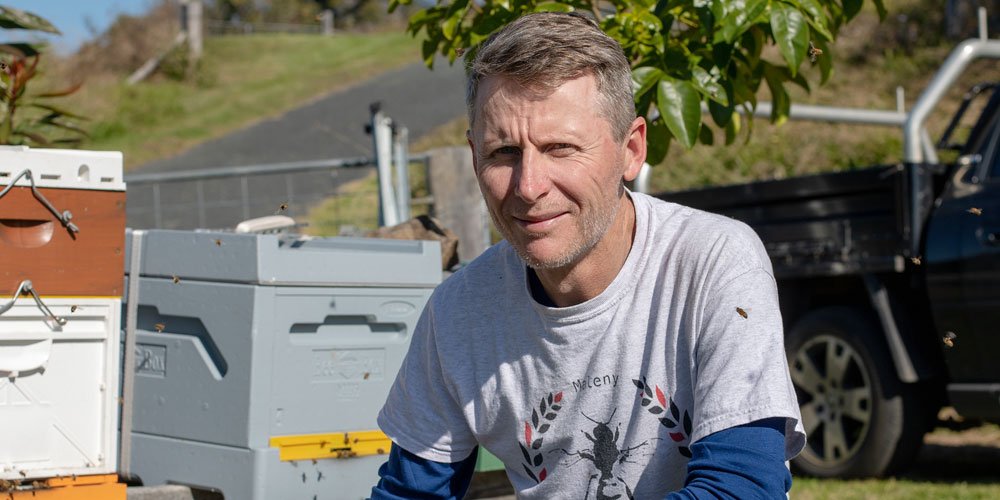 Honey, apples, avocados, grapes, mangoes, strawberries, cashews, coffee, cocoa, broccoli, carrots, chillies. These and many other foods would not exist without bees pollinating the plants that produce them. With bee populations around the world under threat, Maleny’s Scott Whitaker of Hinterland Bees has become a local ‘bee whisperer’, removing wayward hives and swarms across the Sunshine Coast and Brisbane and rehoming them on his property in North Maleny, where he produces Maleny Honey from rescued bee hives.

His eco-friendly system for removing hives from the walls of homes and commercial buildings means the pest man doesn’t need to be called to spray toxic chemicals, and the bees get to see another day, pollinate another plant, and make some more delicious honey.

“Last spring and summer, I did about 50 removals,” Mr Whitaker says. “They come in little hotspots. In early spring, I got a whole bunch of jobs at Golden Beach. I’ve lost count of the number of removals I’ve done at Sunrise Beach this season.

“With the drought breaking, there were lots of resources for the bees and the consequence of that is not just lots of honey, but the bees want to reproduce and swarm. Then they get into people’s walls and ceilings and keep us on our toes.”

Bees love brick veneer houses, which have weep holes in the bricks that allow them to enter into the wall cavities. A hive can contain 60,000 bees, plus more than 100 kilograms of honey. The only complete removal solution is a cut-out.

Mr Whitaker cuts out the honeycomb and vacuums up the bees using a special vacuum that doesn’t harm them, all while searching for the queen bee. It recently took him 12 hours to remove a massive hive from a barn in Towen Mountain near Nambour and he didn’t find the queen bee until the last 20 minutes of the job. 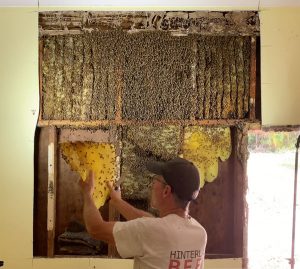 Mr Whitaker feels by saving the bees from extermination, he’s doing his bit for the environment. His job as a bee rescuer began in 2014, when a friend asked him to help remove swarm of bees that had set up home at a school in Bald Hills.

“Usually when I do a cut-out, I cut 30 to 50 kilos of honey out of the wall and ceiling, with all the wax,” he says. “It involves the disassembly of parts of the wall or ceiling sheeting to expose the nest. If you don’t remove all the comb and fill the void with insulation, it will almost certainly result in another swarm moving into the space, even if the previous colony has been poisoned.

“Fortunately, a lot of exterminators don’t exterminate bees anymore. To exterminate a nest is only solving half the problem. For a homeowner, the bigger problem is the material that gets left inside the wall. If you kill a nest, what generally happens is the nest gets attacked by a small hive beetle, which will go in and defecate into the honey stores, which ferments it and turns it into this brown ooze. Imagine what that’s like in the ceiling of the house. It’s diabolical and it spreads out and destroys the ceiling.

“Within time, you are almost guaranteed to attract another swarm of bees in there, because bees do so much communication through pheromones. The queen pheromone is in that cavity and will attract scout bees looking for a place to move into. It’s a never-ending cycle if you don’t deal with it properly.

As the only full-time bee removal expert on the Sunshine Coast, Mr Whitaker is run off his feet. He balances hive removal with managing his own hives – he has nine different apiary sites stretching from Mapleton to Maleny and Peachester, with 150 hives in total.

“I put a lot of effort into trying to mitigate swarms from my hives,” he says. “From a business point of view, there’s no point me dealing with other people’s bee problems if my hives are going to swarm. Swarming happens when the colony runs out of space, when they are responding to really good seasonal conditions and lots of pollens are coming in to feed the developing larvae.

“It’s not the sort of thing I’m complaining about. I’d much rather it be that way. If there are lots of swarms around, it’s because conditions are good for bees. Beekeeping is very in touch with the environment and it feels like a legitimately good thing to be doing.”