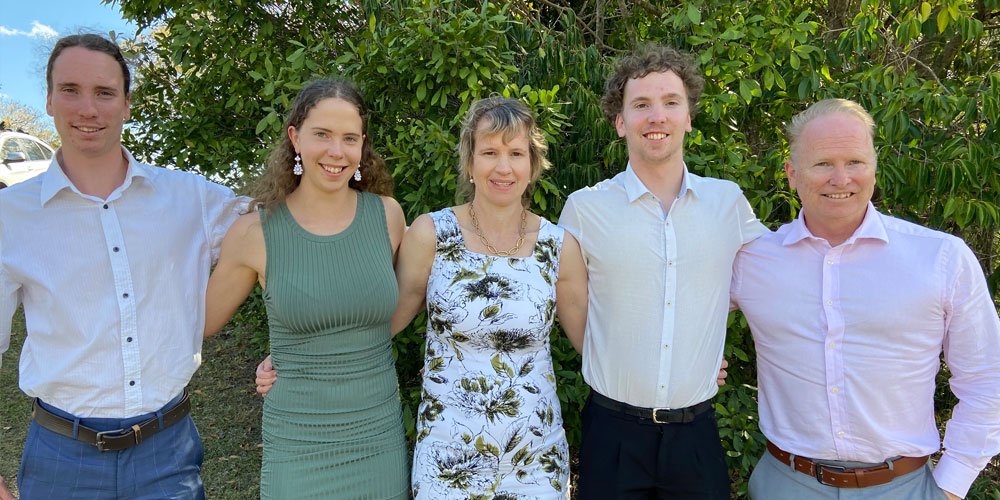 Three birthday cakes on the same day every year for two decades. It’s not the only thing Christine Clegg has done in threes while raising triplets Matt, Riley and Tayla, who turned 21 on November 15. Each birthday, Mrs Clegg has made three cakes in the shapes of animals, princesses, trains and cartoon characters, but this year their cakes will be a little more grown up.

When the Clegg family celebrates the triplets’ 21st birthday, it will be another milestone for these well-known locals. From their premature birth in 1999, weighing slightly more than a kilo each, the media has reported on all the significant events in their lives, from their first birthday to graduating from Nambour Christian College.

The community has always felt invested in the progress of the family, even to the point of commenting to Mr and Mrs Clegg when they were out in public with their children in a limousine pram how “awful” it must be to have triplets.

“Having triplets is the best gift we could have received, especially as we thought we might never have children,” says Mrs Clegg. “People would say, ‘oh you poor things’ and I’d say, ‘they’re pretty good’. Then they’d say, ‘triple trouble’ and we’d go, ‘yeah, but triple treat too’.

“If anyone said, ‘oh you poor thing’ near my mother-in-law, she’d say ‘these are wanted babies; you don’t know what they went through to have them’.”

Mr and Mrs Clegg endured years of disappointment with IVF until Mrs Clegg  finally fell pregnant. The triplets were born by emergency caesarean at 29.5 weeks at the Royal Brisbane and Women’s Hospital and brought home to Selangor’s maternity unit, where they lived for the first two months of their lives.

The first six months were a blur of feeding, bathing and nappy changing. Mrs Clegg says her husband Paul, who is head of primary at Sunshine Coast Grammar School, maintained a sense of calm and order in the house, while she rotated babies from breast to bottle and made sure the challenge of juggling all three didn’t stop her getting out of the house.

Matt, Riley and Tayla still live at home in Buderim. Tayla is studying nutrition and dietetics at the University of the Sunshine Coast and works part-time at Coles. Riley is studying a Bachelor of Business (Tourism, Leisure and Event Management) at USC and Matt has set up a mowing business and is working as a landscape gardener, with an eye to studying outdoor education.

“I am the first-born triplet!” Matt says. “It’s pretty cool sharing my birthday with my siblings. We share some similar hobbies and it’s fun to do some things together, but we’re also different in many ways. We get on well together and always enjoy finding new things to do.”

Middle triplet Riley says growing up as a triplet has been amazing. “Being a triplet is reassuring,” he says. “My sister and brother were never far away, so we were never alone growing up. The three of us would always hang out and laugh together. Twenty-one years later, this hasn’t changed. We are now closer than ever.”

Last-born triplet Tayla says turning 21 with her brothers is an exciting milestone.

“From a young age, we always had a special bond, which I believe has helped me a lot growing up,” she says. “Growing up and presently, there was never a time where I felt alone being the only girl. We always did things together and continue to do so when we can. I don’t believe we can read each other’s minds, but I do believe a special triplet connection exists.”

Mrs Clegg says the 21st birthday party will not only be a chance to celebrate, but also to honour those who were instrumental in the conception, birth and care of the triplets, such as the obstetrician/gynaecologist who gave them the gift of their three babies and the “amazing staff” at the Grantley Stable Neonatal Unit where they were cared for after their birth.

“People ask if I miss them being babies and in some ways, I do, because I loved it. There was always something about each stage that I loved. Between Paul and I,
I always felt there was enough of us to go around. Even those early times, when you’re just living one feed to the next and trying to survive, I’d say to Paul, ‘how lucky are we to have these kids?’”