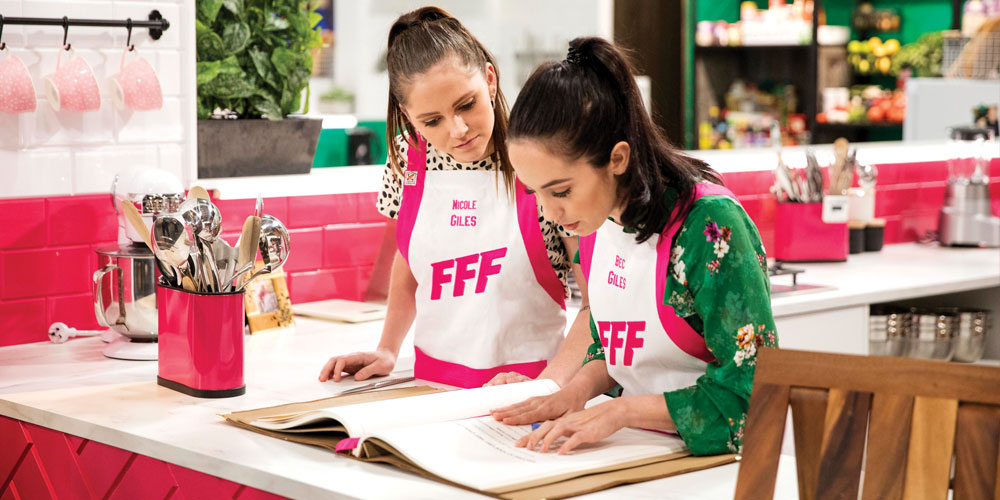 As eight families of two walked into the Family Food Fight kitchen on October 26 to begin the battle for culinary supremacy, two Sunshine Coast-raised sisters appeared to form one of the least intimidating teams.

But the Giles sisters, Bec and Nicole, have been dubbed the ‘smiling assassins’ by the Nine Network, and while they appear sweet and innocent, Nicole says they have an extremely competitive side that has served them well throughout the competition.

Nicole, who now lives in Melbourne, says her older “sister from another mister” Bec taught her how to cook because “mum was terrible at it”.

“Mum used pre-made packet stuff and sauces out of the jar. When me and Bec moved out, that’s when our love of food started,” Nicole tells My Weekly Preview.

“We were travelling and getting more interested in food and I learnt a bit off Bec so it was easier for me. She had to start from scratch.”

Because of the different ways they learnt to cook, Nicole says they function very differently in the kitchen when they work together.

“I am more of a recipe person and love learning from recipes, whereas Bec is more of a hands-on experimental person. But it works well; we both know where we stand in the kitchen and where we stand with each other and we complement each other well when it comes to the challenges,” she says.

The 22-year-old admits she hadn’t heard of Family Food Fight when Bec, who now lives in Brisbane, first suggested they enter.

So she binge-watched the inaugural 2017 season to see what it was all about. When she found out they had made the cut for this season, Nicole says she was super keen to meet judge and dessert queen Anna Polyviou, lead judge and acclaimed chef Matt Moran and food critic Tom Parker Bowles.

“I think I was excited to see all of the judges; it was all new and amazing to me,” she says,

“I definitely smile and I laugh at every situation possible, even if we’re not doing too well. Bec is also the same, but she definitely can knuckle down and be serious whereas I kind of struggle with that side of things.

“I hope viewers enjoy having a laugh along with me while watching the show.”

Matt Moran, who owns successful restaurants including Aria in Brisbane, and regularly holidays in Noosa, says the 2018 season evolved into a “very different show to last year”.

“People are getting upset if they don’t win or if they are not in the right position in their eyes.”

Mr Moran says he didn’t let the feistier competitors influence his judging style or critiques as he gets to watch on from the commentary position with the other judges, all-seeing and all-knowing as the blow-by-blow action unfolds at the stoves and benchtops.

“I just sit there and take it in my stride,” he says.

“I understand what it’s like to be competitive. I’m pretty competitive myself. So I understand how it can be hard for them to get feedback from us and because they don’t see all of the conversations we have while judging, they can question us sometimes.

“Cooking takes time and it’s not an easy thing to learn. Time is knowledge and my knowledge is pretty good.”

Mr Moran says the Giles sister are “great girls and good cooks” and he is pleased to see their competitive side come out when it really counts.

See our local girls in action on Family Food Fight on Monday, Tuesday and Wednesday evenings at 7.30pm on Nine.