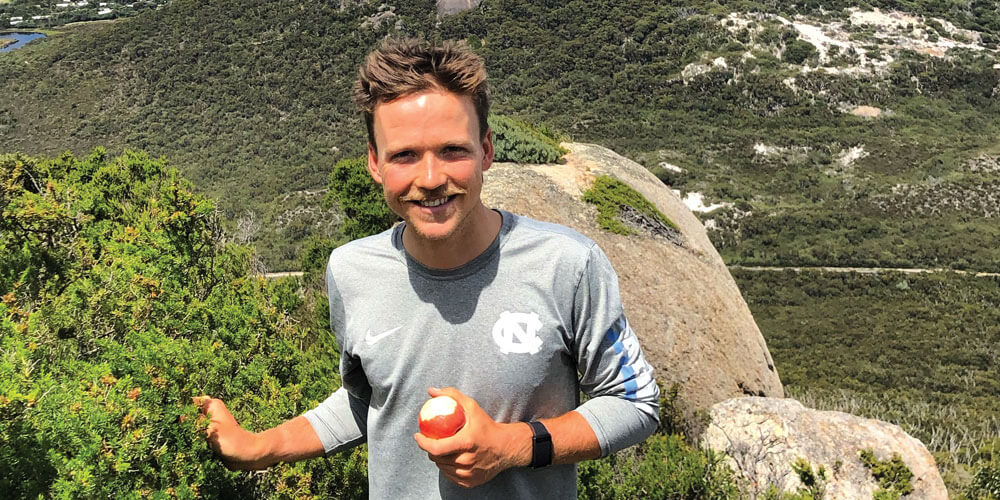 Alistair Donohoe was like any 15-year-old growing up in Darwin. He loved sport and hoped to make a career out of it. He also loved hanging out with his friends at the creek during the school holidays.

But one day as he went to jump out of a tree into the water, the rope swing caught his right arm and caused an injury that would change his life.

“I wasn’t aiming for the rope but it caught my arm and got tangled,” he says. “It hit the knot at the bottom and that force was enough to sever 90 per cent of my tricep and 70 per cent of my bicep.

There was also some radial nerve damage, which affected my hand and wrist. It was the single most painful experience of my life. I remember nearly passing out. I was overrun with shock and adrenaline and I was hanging by my arm at the time, trying to pull myself up.

“When I went to the hospital, they didn’t really know what happened and how to treat it. With the internal bleeding my arm was huge and black. After a month the swelling had gone down and they could see the lasting injuries.

“There was nothing they could really do about it. I went to see a number of specialists in Melbourne over the next year and they considered possible muscle transplants.”

The doctors told his parents he would lose his arm, but that prognosis was wisely kept from him. He was young and resilient, and went on to regain limited use of his arm. “All I was focused on was getting back to riding and as soon as I could, I did,” he says.

“I learned to compensate. I did everything as a kid – athletics, rugby, mountain biking, BMX, road cycling and the velodrome. After my accident, I went more towards the velodrome than the road. In terms of an injury to get in a certain sport, I was lucky with bike riding.”

Mr Donohoe’s father passed away in 2006 and his mother,  with five children to raise, moved to Melbourne in 2010 to be near family. There, Mr Donohoe completed school and took advantage of the more competitive cycling scene.

“Mum’s an absolute legend to be able to get through all that,” he says. “I’m the youngest of five kids and how she raised most of us on her own is just phenomenal.

“I probably got her mental resilience and drive. I’m sure she has a truckload. When she came to watch me in Rio, we had some pretty emotional moments and it was absolutely phenomenal to have her there and to dedicate some of my wins to my dad.”

It was during the 2016 Rio Paralympics that Mr Donohoe was famously knocked off his bike when Ukraine’s Yehor Dementyev collided with him as they sprinted towards the finish line of the 84-kilometre C4-5 road race, effectively robbing Mr Donohoe of possible gold.

“He got disqualified,” says Mr Donohoe. “They couldn’t really reward me with the win. It was literally 20 metres before a gold medal.”

While it was a devastating disappointment, Mr Donohoe looks back on the incident with a sense of humour. “It was a reverse Steve Bradbury,” he laughs.

“It’s sport and you go with it. You win some, you lose some. You can’t really control those things. That really put the hunger in the belly for Tokyo and left something unfinished for me. In terms of the Paralympics, coming away with two silver but not getting gold was tough.”

But Mr Donohoe, now 24, finally closed that chapter of his life recently when he beat Mr Dementyev at the 2019 UCI Para-Cycling Track World Championships in the Netherlands, winning two gold medals in the Men’s Individual Pursuit C5 and Men’s Scratch Race C5, shaving six seconds of his personal best time.

“It blew my expectations out of the water,” he says. “That’s the time I did before Rio and with the focus I’ve had on the road side of things, I haven’t been able to ride that quick for a few years and I didn’t think I was there yet.”

As a member of the Australian Cycling Academy’s Pro Racing Sunshine Coast team, based at the University of the Sunshine Coast, he’s spending a few weeks on the Coast training in preparation for the Tour de Langkawi in late March.

“Pro Racing Sunshine Coast has the best interests of the riders at heart,” he says. “Cycling is a pretty cutthroat sport where quite often you find yourself a little bit used in the interests of the team. If the start of this year is anything to go by, being with them has made a huge impact. Having them in your corner and their advice goes a really long way.”

Mr Donohoe has been enjoying the stunning Sunshine Coast scenery on his daily training rides, completing rides of between 100 and 160 kilometres six days a week.

“This is what I’m loving about the Sunshine Coast,” he says. “There are so many new areas for me to explore. I rode to Noosa and back through Eumundi and the hinterland one day and up to Montville on another day.

“I’m doing lots of bunch rides with up to 50 people, which makes it a pretty exciting training environment. It’s a bit more motivating. There are a lot of older guys and younger guys and a lot of them are quite fast. It’s a really nice atmosphere.”

After Langkawi, he’ll spend five months racing and training in Europe, all with one major goal in mind: gold at the 2020 Tokyo Olympics. “The goal is to become a professional cyclist, but at the moment my focus is pretty homed in on Tokyo.”

Let’s hope the Olympic gold that had his name written all over it in Rio will finally hang around his neck in Tokyo, right beside the right arm that he has never allowed to hold him back.