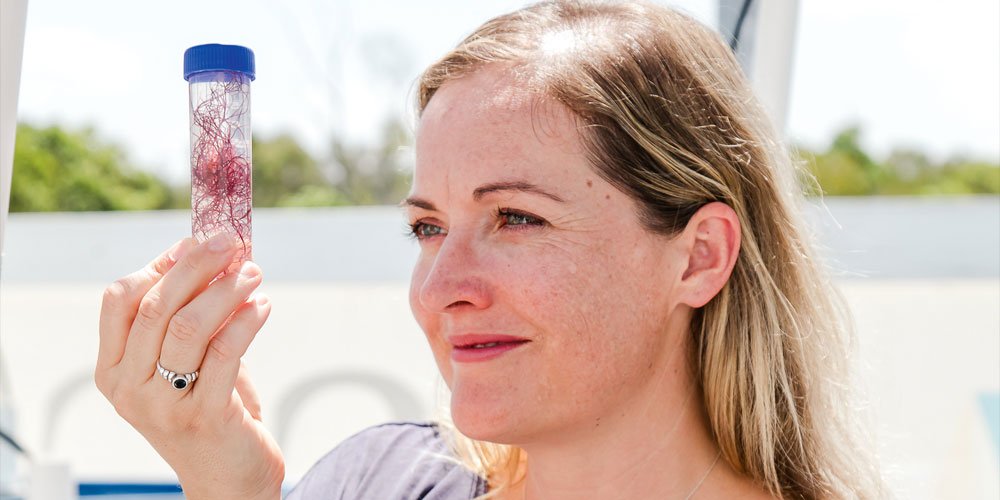 Marine scientist Dr Alexandra Campbell says she can see the disappointment on people’s faces when she tells them she doesn’t work with whales or dolphins. The University of the Sunshine Coast lecturer has just been named one of Australia’s official Superstars of STEM and her mission is to get other people as excited about seaweed as she is.

Based at Coolum, she is one of 60 women from around Australia selected to take part in the Superstars of STEM program. Supported by the Australian government’s Department of Industry, Science, Energy and Resources, the national program equips STEM experts with the communication skills they need to become role models.

A senior lecturer at the University of the Sunshine Coast, she is also a co-founder of USC’s Seaweed Research Group, which is working on ways to get the community interested in the restoration of seaweed forests and investigating the potential of growing seaweed at scale to feed to cattle to stop them burping methane.

“Seaweeds are these amazing organisms that can do so many things for us and indeed do all the time, but are one of the least popular or least glamorous organisms,” she says.

“Seaweed is something people don’t think of much, unless it’s annoying them by creating a smell on the beach or on a plate wrapped around their sushi,” she adds.

Dr Campbell is concerned with the loss of seaweed forests around the world, and hopes to be able to work on ways to engage the community with their restoration.

“We used to have quite extensive sargassum forests off the Sunshine Coast, but some time in the last 20 years, it has disappeared. It’s probably because of the development we’ve seen … and while sad, there is potential to develop them and future-proof them.”

Like trees, seaweed absorbs Co2 and mops up pollution. It creates underwater ecoystems that provide food and shelter to fish and invertebrates and is an important habitat for many organisms.

While our sargassum may have disappeared, we do have plentiful amounts of a seaweed called asparagopsis, a large fluffy seaweed that, when fed to cows, stops them releasing methane gas.

“We have lots of that one here,” Dr Campbell says. “I’m really interested in solutions-focused science – ways we can use our understanding of seaweed to address specific needs, particularly in the environmental and business spaces.

“Seaweed has a huge potential to solve many big problems. By restoring seaweed forests, we can facilitate the restoration of other species in the sea and, because seaweed grows so rapidly, it is also a healthy option to help boost food security.”

As a young girl, Dr Campbell didn’t necessarily dream of growing up to work with smelly, slimy green stuff, but she did show an early interest in all things oceanic.

“I was born in the country, in Inverell,” she says. “It was a long way from the ocean. Most summers, the highlight of my year was going to the beach, having experiences with dolphins in the waves and looking at rockpools filled with crazy marine animals that stole my heart from an early age. I knew I would study marine science.”

Dr Campbell began university studying environmental engineering. After six months she switched to marine science. Having completed her undergraduate and postgraduate studies at the University of New South Wales, she moved to the Sunshine Coast with her husband and twin boys, who start school next year, to take on the job at USC. She could not be happier.

Dr Campbell says the communication of science has never been more important.

“This is a time in our history when we really need clear communication of STEM to combat misinformation,” she says.

“Placing articulate experts in the spotlight will help us innovate our way out of the global catastrophes we are experiencing at the moment by making innovation and technologies more accessible to everyone.”