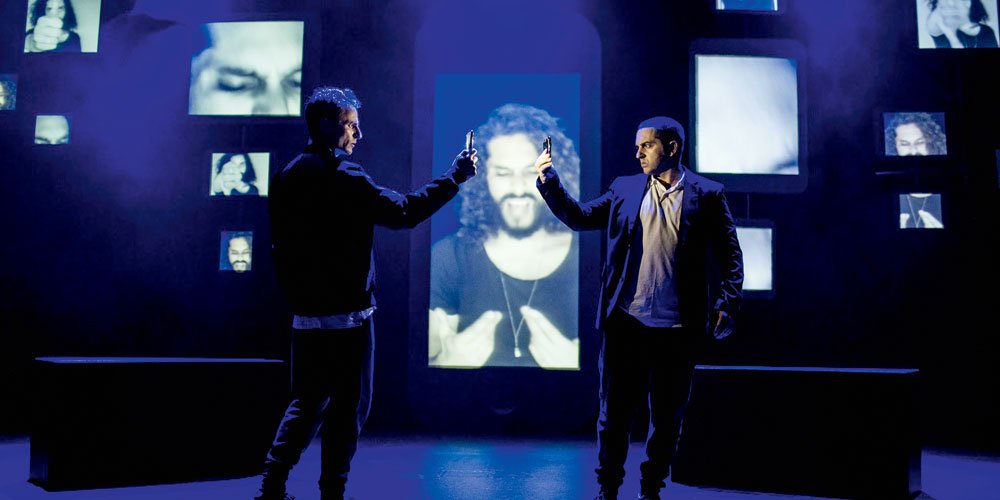 When two young women attacked a legally blind man on a Gold Coast bus in 2014, a 13-year-old girl travelling on the bus filmed the attack. When it was subsequently posted online, it went viral. The incident raised many questions – is it better to intervene in such a situation, or film it for evidence? Is filming it and posting it online a violation of privacy, or a community service?

These and other questions form the basis for a compelling stage production called Viral, coming to the Sunshine Coast on March 26. Its creators, Hayden Jones and Sam Foster of Gold Coast theatre company Shock Therapy Productions, have won numerous awards for the show, which has enjoyed a successful five-year run.

Shock Therapy Productions co-founder and co-writer of Viral, Mr Jones says the production has exceeded expectations. In the 2016 Matilda Awards it won Best New Australian Work and Best Actor (Mr Foster) and in 2019, Mr Jones and Mr Foster took it to Norway, where it was translated into Norwegian and staged in Oslo.

“We didn’t think we’d still be performing it five years later,” Mr Jones says. “It still feels really relevant. I think what’s unique about this show is it sort of has a dual target of adolescents and adults. We’ve managed to pitch it on both levels.”

Mr Jones performs in the show along with Mr Foster and has worked as an actor, director, writer, producer and workshop facilitator. With an extensive background working in youth theatre, children’s theatre and theatre in education, he brought a wealth of experience to Viral.

“Sam and myself wrote the show for ourselves to perform,” he says. “The style comes from epic theatre by Bertolt Brecht. We play about 25 characters and we never change costume or leave the stage.

“Viral investigates the role of social media in modern society and the role it plays in how we engage with various situations. The event on the Gold Coast triggered it off.”

Mr Jones says they wanted to explore the line between disassociation and raising awareness about events of racism, abuse, violence and sexual assault in the community. They raise the question: is it better to record these activities and post them online, or step in and stop them from happening in the first place? But they were aware of the risk of coming across as too preachy for a teenage audience.

“Sam and I both have teenage kids and we’re aware they will sniff that out immediately,” says Mr Jones. “Part of our ideology in theatre making is we don’t want to come with answers.

“We performed Viral recently at a school in a really tough demographic and they love it. It keeps reaffirming to us that we managed to land it in the right place.
We try and pose questions and make provocations, rather than tell people what the outcome might be.

Mr Jones says the theatre version of the show is a much bigger production than the school version, with 13 projection surfaces, more audio visual equipment and multimedia to create a beautiful stage.

“It sounds really heavy and there are confronting aspects to it, but the show is also very animated and comical,” he says. “We’re dealing with quite a serious subject that can be quite heavy, so we try to offset it by finding as much humour as possible.”

While many theatre companies have struggled through COVID, Mr Jones says Shock Therapy has stayed afloat.

“We’ve been very lucky; the Queensland government has been pretty amazing with the amount of grants and funding opportunities we’ve had. We’ve been successful in a number of those, which allowed us to pivot and still have projects to work on with online streaming.

“We have a few streams of what we do,” he says. “We have an education program with about five shows we take into schools. We run workshops and do festivals and performance installations. We’re a bit unique as a company in that we do it all and we’re always trying to extend ourselves.

“We both spent time as actors, sitting around waiting for people to give us permission to do what we wanted to do,” he says. “We got fed up and [said], let’s do what we want. It has worked out well.”