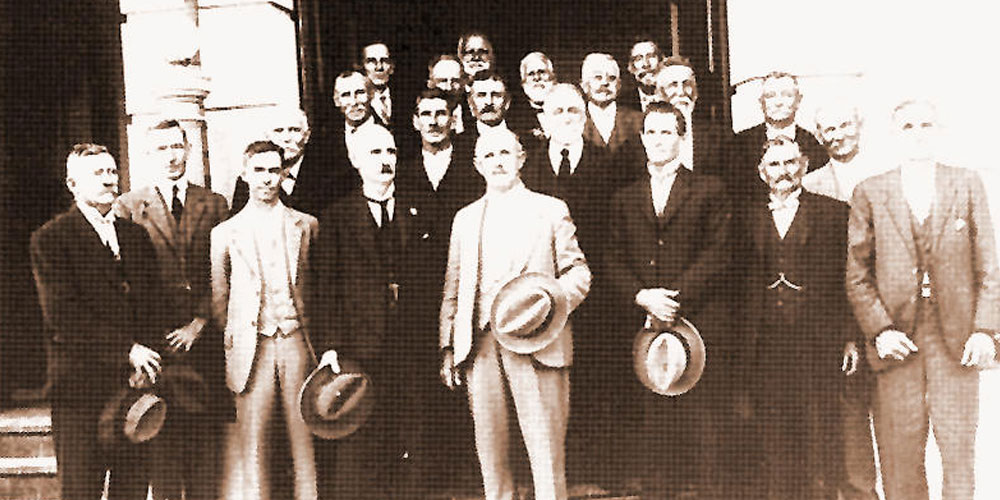 J.T. Lowe and the Maroochy Shire Council in about 1935.

James Thomas ‘JT’ Lowe was a Maroochy Shire councillor for 31 years, 19 of them as chairman, through the first decades of the 20th century.

His name is not to be confused with the other Low family, the one without the ‘e’ on the end, made famous by another shire chairman and MLA, David Low, almost three decades later.

He may not have a Coast road named after him, but he does have Lowe Street in Nambour.

A century ago, before tourism replaced primary production as the region’s economic base, Nambour and the Maroochy Shire were the centre of the Coast’s universe, and rural towns ruled over coastal outposts.

And it was in this world, that JT ruled.

He was born at Staffordshire in England in 1868, and was a teenager when his family set sail for Brisbane in 1882. The family settled in Brisbane until his father selected land on the Maroochy River at Dunethin.

It was here that JT “learned the hard work of the bush” felling cedar and beech. He also worked for Pettigrew’s sawmill in Maroochydore before learning to be a butcher in Woombye.

He bought Mr Currie’s butchery in Nambour and in 1907 built his own where today Lowe Sttreet joins Currie Street. The building was destroyed by fire in 1946.

JT was innovative as a butcher. On December 21, 1906, he advertised that he “will also have the best obtainable poultry dressed ready for the oven at a price well worth the saving for the ‘missus’ who would under usual circumstances have to do it herself”.

His ice plant was also “kept hard at it in view of the increased demand for this popular summer commodity”.

JT was elected in 1904, just four years after the Maroochy Divisional Board became Maroochy Shire Council, and in 1908, he began his first term as chairman.

He would lead the shire through the tumultuous years of World War I and the Great Depression, although his relationship with voters was often equally tumultuous.

His administration was characterised by tight financial management and election battles were often hard-fought.

Not everyone agreed that electricity was a good idea, but he persisted and the Nambour Electrical Authority was the beginning of “district wide electric reticulation”.

Similarly, it took him more than six years to convince ratepayers of the worthiness of a brick and concrete town hall. It opened in 1931.

JT convinced councillors it would be unwise to raise borrowings during the depression and three years of financial stringency followed, but in 1933, Maroochy Shire was one of the few local authorities in Queensland not in substantial debt.

He was instrumental in the formation of the Nambour Hospitals Board and the chamber of commerce, and on January 1, 1916, he chaired the formation meeting of the Maroochydore lifesaving club in a Salvation Army tent at the Cotton Tree campground.

With R.H. Whalley, he helped found the Maroochy Pastoral, Agricultural, Horticultural and Industrial Society and they became the first two presidents of what is now the Sunshine Coast Show. The first nine were held in Woombye, but under Lowe’s presidency the showground was cleared and levelled in Nambour ready for the 1909 show.

A public meeting was held to plan acknowledgement of his public service – councillors didn’t enjoy the generous pay packages they have today – and a bronze tablet was placed in the foyer of the town hall. 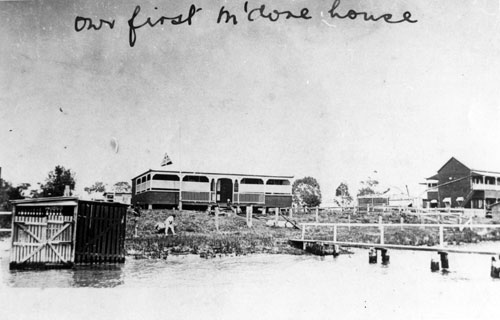 J.T. Lowe’s beach house on the banks of the river at Maroochydore in about 1920. In 1922, William Butt built a house and then a store on the block between Lowe’s property and the Club Hotel.

Bettie and Charles Clark cleared the land to build a house on their farm at North Arm where they lived and had eight children, from 1889 to 1898. During that time, Bettie kept a diary.

In it she described their daily life, family, the farm and neighbours, birth and death.

Her story is a remarkable account of the trials which were common in the early days of rural settlement, especially around the north arm of the Maroochy River. The 1890s were a time of flood, drought and a depression, so life was difficult.

The diary ends on January 19, 1898 when the Clark family left North Arm after the great flood. They never returned.

A family letter survives from the 1920s which details events after that, but you will have to read a new book,Betty Clark’s Diary, by Audienne Blyth to find that out.

Continue Reading
You may also like...
Related Topics: History