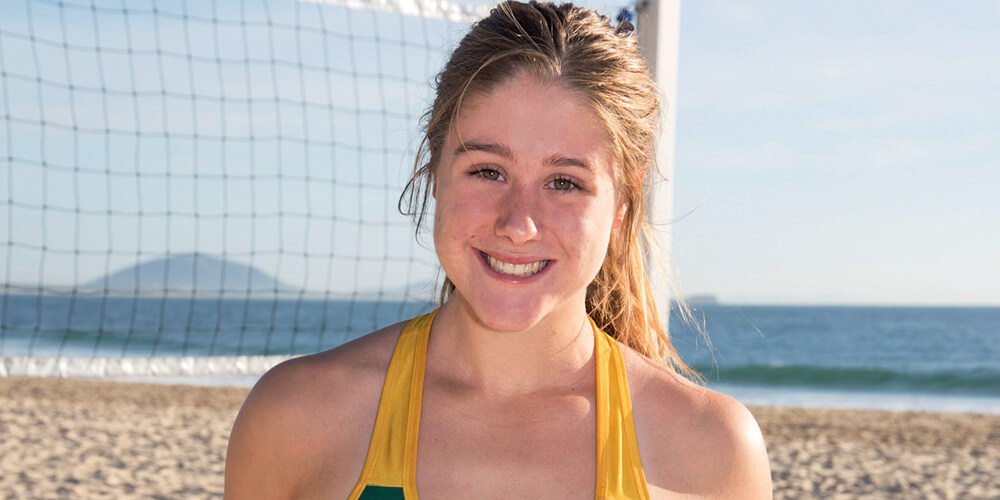 Women’s netball has been in the spotlight recently, but Sunshine Coast volleyballer Caitlin Bettenay says volleyball has a lot going for it and would love to see the same status given to the sport in Australia as it receives overseas.

“It’s huge overseas,” she says. “You say you play volleyball in any other country and people go wow, that’s awesome. I sign autographs and jerseys, phones and iPads in Thailand.

“I was like, are you sure you want me to do this, I’m just this little girl from the Sunshine Coast? Over there you’re a big sporting star. It’s huge in the US, huge in Asia, massive in Europe, beach volleyball is huge in Germany and Brazil. I’m waiting for it to catch up and get some recognition in Australia. The Federation is doing everything it can.”

While she’s now based in the US, My Weekly Preview caught up with Bettenay when she was back on the Coast recently to train at Mooloolaba Beach for the FIVB U21 World Beach Volleyball Championships in Nanjing, China last week.

“Volleyball attracts both genders, it’s a really aggressive game,” she says. “Guys get their fill, they can hit the ball as hard as they want. It’s also a really safe sport in terms of injuries.

“We’re getting a lot of people from rugby and AFL changing to volleyball because it’s so safe, there’s no physical contact, no concussions, it’s not as dangerous. The only injuries you get are overuse injuries or maybe an ankle injury. It’s really fast-paced and you have to be intelligent and smart to play. You have to use your physique as well as your head.”

Bettenay grew up in Caloundra and Coolum and went to Mountain Creek High, where teachers Timothy Wilson and Andrew Denny spotted her talent.

“I started indoor volleyball when I was 14,” she says. “I was into athletics and high jump and the volleyball coach at school said you can jump, why don’t you try volleyball? I found it was perfect for my physique.”

Six months later Bettenay was recruited to play state volleyball in Brisbane and was accepted by the Queensland Academy of Sport. It took a great deal of dedication to keep up her rigorous training schedule while completing high school, but the hard work paid off.

“My parents and grandparents took me to Brisbane for training three times a week and I got home at midnight and had to go to school at 7.30 the next day. School finished at 1pm, I left to go to Brisbane at 2pm to train for two or three hours and then we’d drive back. I’d do my homework and assignments in the car – it became my office.”

“I went to the Australian National Championships with other girls my age and I kept falling in love with the beach volleyball and found it fitted me really well. I loved how challenging it was, just two people on the court and there’s no easy way out, you win together and you lose together. I prefer beach volleyball because it’s more challenging mentally.

“I love being outside in the sun and sand, you get to go to really good places, there’s a good atmosphere and really good people.”

After graduating from high school, Bettenay was offered a number of sporting scholarships to US universities and chose Portland State University in Oregon, where she’s completing a degree in physiotherapy on an indoor volleyball scholarship worth tens of thousands of dollars.

“I wasn’t really sure I wanted to go to the US, there was a lot of pull for me to join the Australian national program in Adelaide. I didn’t feel like that was what I wanted to do because once you move there, that’s it. I felt like I moved there that’s where I’m going to be living for the next 10 years of my life. I wanted to have more life experience.

“I’ve just finished my first year [at university] and I’m going into my second year. It’s pretty cool, I’m training full-time and sitting in lectures and getting my whole university degree paid for.

“The season is really long – we leave on a Wednesday morning, travel, play Thursday night, travel Friday to another state, play Saturday night, come back Sunday and go to lectures on Monday and Tuesday and then we’re back on the road again. I miss a lot of uni and have to be really diligent and catch up.

“It’s challenging but it’s really good. I want to be pushed and challenged and made into the best I can be.”

While Bettenay misses her family and the Sunshine Coast beaches, she’s enjoying life in Oregon and saw snow for the first time last winter.

“I’m in a pretty politically active state,” she says. “Portland is very liberal and they’re very vocal about what they believe in. There’s protests almost every week. As an athlete, you just put your head down and focus on what you have to do.”

Bettenay credits much of her success to the support of her family, who live in Coolum – Bettenay’s 16-year-old brother also plays volleyball and is an under 15s Queensland coach.

“They’re proud of me, they’re very determined to see me achieve my goals. They’ve been a really amazing support for me. They’ll do anything to help me get better. They’ve sacrificed so much for me. What 17-year-old girl moves across the other side of the world to study? They’re amazing.”

“At a junior level we are self-funded. It hasn’t got a high enough profile yet. I’m trying to raise awareness and raise the profile of the sport. If anyone can get on board and help us achieve our dreams, we do it for the love of the game.

“We’re women in sport and we go to the Olympics, but netball gets all the funding. It would be great to give some of that funding to volleyball, it’s the second most played sport in the world after soccer and it’s a very gender equal sport.”

To help Bettenay represent Australia at the FIVB under21 World Championships being held in Nanjing, China in July visit https://www.gofundme.com/worlds-under-21s-beach-volleyball

Continue Reading
You may also like...
Related Topics: Profile, Sport